At the end of April Rocket Theme announced the arrival of their long awaited and much anticipated admin theme for Joomla! 1.5 and Joomla! 1.6. Rocket Theme club members have had access to the beta version during the development process and I'm sure to the delight of many a Joomla! user, when the theme was ready for release it was made freely available for all Joomla! users to download.

I have been using the Mission Control theme for a week or so and I must say that I really like it. The Rocket Theme team have obviously put a lot of energy and thought into the workflow of the Joomla! admin and have made some significant changes to the default Joomla! admin structure. It didn't take me long to adjust to the changes ,and on the face of it, I think they improve the way that users, well this user in particular, interacts with the Joomla! admin.

I wanted to find out more about the way the template was developed, and the structural and design changes they made, so what better way than to ask the man behind the Rocket Theme control panel, Andy Miller.

What was the initial brief you started out with for revisioning the Joomla! admin? Did you do any user experience testing initially? What elements of the default Joomla! admin did you like or dislike? Did you use the admin from other CMS's as an inspiration for developing Mission Control?

First, I want to say that I've long had an interest in the Joomla! administrator. In fact, it was the first thing that drew me to Mambo originally, and also was one of the first things I worked on when I joined the Mambo core team. At the time, the Mambo admin was way ahead of the other open-source CMS's out there, but it was still a bit rough in some places, so I worked on smoothing those out. After we started the Joomla! project, I worked on the Khepri template for Joomla! 1.5, that was really just a logical evolution of the existing design.

At the time, I had originally wanted to do a more radical redesign of the administrator for 1.5 but it was decided to keep things consistent with previous versions and not require any major 3rd party changes. In retrospect, this decision probably helped contribute to the fast adoption of Joomla! 1.5 which was one of our key goals. However, the downside was we basically were running an admin that had not changed significantly since the Mambo days.

I have a privileged position at RocketTheme in that we have a huge user-base of users that are constantly working on Joomla! deployments. Naturally, this means that we get lots of users talking about Joomla! and their frustrations and requests for the administrator interface. Also, I personally, and the RocketTheme team as a whole, use Joomla! extensively and have formed our own opinions and discussed improvements over the years. For quite a while I had wanted to take these great resources of information and do something productive with it, therefore I started working on a concept for a new admin template, MissionControl.

There were three consistent messages that I kept seeing about the Joomla! administrator:

MissionControl was created primarily to address these 3 points. There are many other features in MissionControl however, that have either been suggested by users during the beta testing phase, or just evolved during the development.

There was no specific CMS that was the 'inspiration' for MissionControl, however I have certainly admired the progress other CMS's have made in their administrator interfaces over the past few years and really wanted to ensure that using Joomla! felt as enjoyable and as modern as using those.

MissionControl is fully GPL, and therefore free to use, so I fondly hope that people like it and enjoy using it. Any further suggestions or requests to improve it are always welcome. 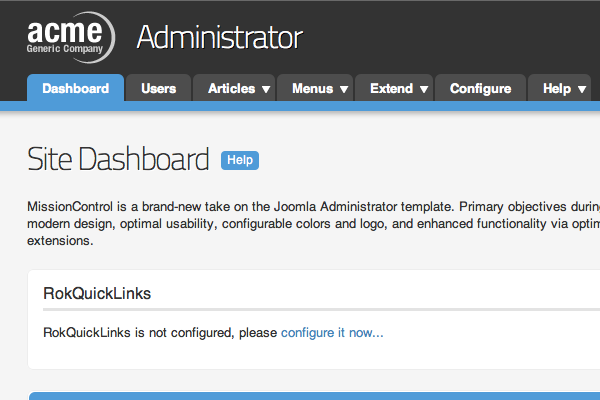 The Mission Control menu changes the default Joomla! menu somewhat — I particularly like the quick cache clean and check in options from the system tools drop down menu. Can you tell us a little bit about the changes you made and how you came to make those decisions?

The Joomla! menu was reorganized slightly for Joomla! 1.5, but after using it extensively since it's development, it still felt overly complicated with very Joomla!-centric names and organization that confused new users. I started by grouping things into a more consistent layout and then released the first beta's with the hope that I would illicit some discussion and see if people liked or hated it. Overall people seemed to really like the new layout and only a few minor changes were made based on comments I received. What you see in the released version is the culmination of that process.

The cache clean, and checkin ajax options are an addition that have come recently. When we first released the beta we initially had some issues reported concerning some 3rd party plugins that at the time I didn't know existed. After we resolved those issues I kept getting requests to add a simple cache cleaning functionality into MC, and with it's built-in ajax functionality we were easily able to add this. After that was in, I thought it would be good to do the same thing for the global checkin functionality also as these two processes are things that all Joomla! administrators have to commonly do. Now i've been using them in MC, I find it hard to be without them. 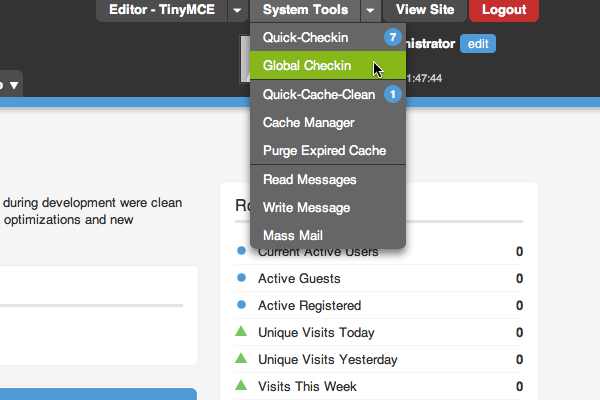 Were there any significant differences between designing and coding for Joomla! 1.5 and Joomla! 1.6?

There were some significant differences and changes between 1.5 and 1.6. In Joomla! 1.5 there was a very inconsistent layout between certain areas of the admin and this has been cleaned up made more consistent for the most part in 1.6. Joomla! 1.5 really had very little ability to override the admin output, but this is greatly improved in 1.6. In the Joomla! 1.5 version of MC, I had already spent considerably effort cleaning up and simplifying the UI. Joomla! 1.6 compounded this effort by adding even more configuration options and panels with different UI metaphors. All of this had to be addressed and incorporated in the overall MissionControl design. All of this in conjunction with CSS changes, form changes, and just underlying framework changes made porting MC from Joomla! 1.5 to 1.6 quite a challenge.

Were there any design considerations made for working with mobile device when you were developing the theme?

Currently not that much. The Joomla! administrator just contains too much information to really work well on a 'small' mobile screen. It really would require a pretty radical version of the administrator to have a mobile-centric version. This might be something we look at in the future, but it was not considered a key driver for the first version. That said, the iPad and tablets in general are becoming more and more popular, and during the initial beta phase, we added support for 'touch' devices in our CSS menu system, so it's very usable on an iPad now.

What is your sense of the future direction of the default Joomla! admin?

There are really some awesome options for the Joomla! administrator templates now that are all bringing different things to the table. MissionControl focused on 3 of the most commonly requested changes with a slew of other smaller features and new bits of functionality that have been requested by our extensive user-base here at RocketTheme. MissionControl is really a result of these users requests and as such I hope that when a new version of the Joomla! administrator makes its way into the Joomla! core, these key features and chunks of functionality are taken into consideration.

In a general sense, I really hope that the future of the Joomla! administrator focuses on usability, speed, customizability all with a clean and modern look. Also, mobile usability will certainly become an ever increasing requirement in our lives, so it makes sense to start thinking about how to tackle these problems today.

This is really what Joomla! needs to compete and stay relevant in a fast moving ecosystem like open-source CMS's. I hope this can happen sooner rather than later. I know myself as well as others that have created their own vision of the Joomla! administrator would love to contribute their thoughts, knowledge, and code to improving this important part of Joomla!. 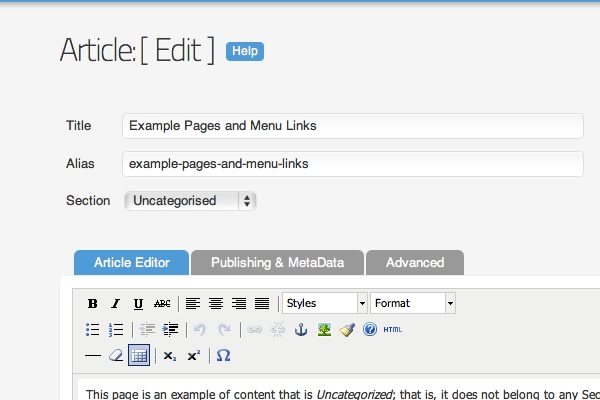 And finally — What is your favourite design element in the theme? Which part of the theme are you most happy with?

Aside from the overall clean and modern look, two features stand out for me I think. Not really a design element, but more a design decision, first is the fundamental layout cleanup in many of the 'edit' views. Moving many of the extraneous parts of the editing process into tabs radically cleans up the interface and hides much of Joomla!'s complexity for people that don't need to deal with it on a daily basis.

The other part of the template that I particularly like is the integration into MissionControl of the ajax functionality that has long been available as separate plugins like fast editor switching, cache cleaning, and global checkin. These are just so handy and such a common task that it makes sense to optimize and integrate this functionality into the administrator itself.

Thanks for the questions, it has been fun!