Joomla had not shown growth since 2016 - 2017 and that was just 0.1%. Over 60 months of the line going down or remaining level. So in early June when the w3tech graph showed a small uptick which wiggled back and forth between a tiny up and baseline flat there was some hope for change.

At the time of going to print Joomla has grown 0.2% in both usage of CMS and usage of the entire web in 6 weeks. Let us explore why

What evidence is there that Joomla is growing?

Many indicators, extension developers such as Nicholas Dionysopoulos have been reporting increased interest in Joomla 4 and growth in sales indicating that the bottom had been reached.

Personally, I have had clients I have lost to WordPress, Shopify or Wix come back in a few cases because the grass didn't turn out quite so much greener on the other site/side!

Standing still will not show growth, so why is it that we are suddenly seeing growth 12 - 14 months after Joomla 4 was released (see the image below)? 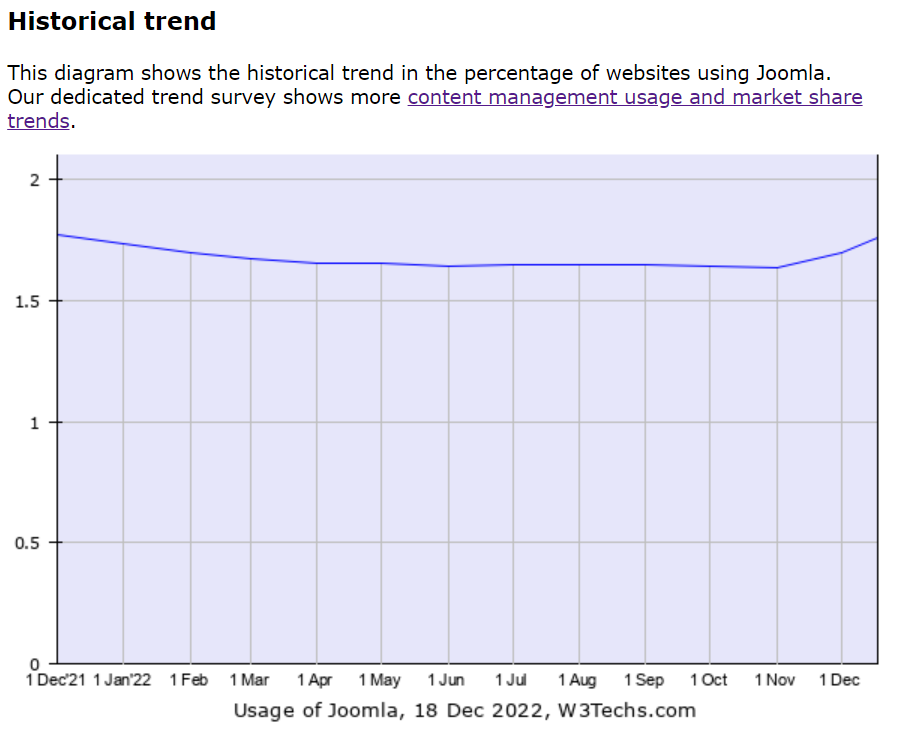 I personally think there are many reasons all coming together and I will go through them in no particular order.

We have a really good product!

Joomla 4 is a big leap forward and it shows. I've converted the majority of my customers' sites to Joomla 4 and both clients and staff are really liking the change.

My assistant Stacey audibly groans when she opens a site to work on it and remembers it's a Joomla 3 site. The ones we still have to convert are all held back because they rely on third-party software which is still not Joomla 4 compatible. In our case, it's mostly J2Store and Shika LMS (Learning Management System) that are the outliers.

Once converted, the clients soon get the hang of the changes and say it looks and feels so much better, a word that they find hard to define but lies in the realm of more modern and more responsive.

I like it because I can use the latest PHP and get the same number of sites taking fewer resources on the servers. This in turn means they are all faster and so it is a virtuous circle.

Three years ago we spoke of a toxic culture, people being more than negative, for negative can have a constructive place if it leads to much-needed change.

The negativity and attitude were unfriendly and unwelcome. I heard from both established members and new ones, that they were frightened (yes: frightened) to post their code on GitHub. To voice concern about something for fear of being sniped at from a Twitter handle.

A common issue was ranting on Twitter about a mistake that was made in code or an article.

Rather than shout on Twitter that there is a mistake somewhere, bigging up the messenger and putting down the recipient. A simple direct message to the person who can correct the issue with an “ I just happened to notice…” is more likely to get the issue fixed quickly and help the project as a whole.

This culture was addressed by several members saying enough is enough and making a positive effort to change the attitude. I have noticed that nowadays there is a lot more cooperation, we don't always get on with everyone, but we should at least make the effort to be courteous and understanding of each other. And saying thank you does make a difference in someone's day.

This has a massive effect on productivity. If you know you will be opening messages that are constructive and positive it can get you motivated and inspired in a way that overbearing and pompous finger-wagging will not. You want to get the project finished rather than dread the next comment or meeting.

We all have a part to play in making the atmosphere better and the change has been noticed and commented on, it's something to keep working on for the good of the project.

In the last 18 months several teams have regrown or started anew. The magazine team really feels like it's got a purpose and direction. There has been a conscious effort to not just talk to our community from this great vantage point but to also talk outside of Joomla with articles intended for a mass market. This can really help to bring new people to Joomla and invite a few of those that have drifted away to come and visit the project again.

Google Summer of Code (GSoC) and the other projects Joomla is part of are a great source of help, enthusiasm and new blood to the organization. This has helped to spread the load and grow a new generation of enthusiastic Joomla coders.

We have a new marketing team with a team lead and an assistant who are both very active and full of ideas to push the brand forward. Around them is growing a group that can chip in and help with the workload.

It's really positive to see how it's grown over the last few years from an almost empty team to one that's active and functioning again.

There are others who are just getting on with what they always have done and making a great job of it, and a few teams that have folded that will need reforming, but the workload is increasing and more is getting done which is having an effect on Joomla's reach into the CMS world.

This is something I have been privileged to watch and see evolve with lessons from previous issues learnt and steps put in place to correct and fix the issues.

The bold promise by the new release lead, Benjamin Trenkle back in August 2021 that Joomla 4.1 would be out on the 15th of February 2022 was met with a fair bit of scepticism, but his determination to not only keep to that but to feedback and inform the process has been a game changer in the way the release is produced.

Multiple release managers were the next change to happen, a strengthening of the release process so that no one person had all the burden of responsibility. This went hand in hand with the increase in the importance of the CMS release team under the management of Sigrid Gramlinger and the teams’ role in testing and improving the process.

Again a culture shift helps so that if something happens that affects a release, it's not a blame game but a mature enquiry as to what happened, what can change to help stop the issue in the future and whether there are any other lessons that can be leant to stop similar happening in the future.

This is a growing process that will not always get it right but has the plan and hope in place that it will succeed and will make all our releases smoother and more reliable.

Benjamin Trenkle taking over as the Production Department Coordinator has seen goals and objectives being introduced and a firm steer for the teams under his charge. This brings up the standard of the product and gives reassurance of its longevity and continued development.

Listening to the Community

Often we hear that there is a divide between ‘them’ and ‘us’ in any organization but I do feel the recent board of Open Source Matters (OSM) has gone out of its way to be as open as possible and listen to the needs and concerns of the community. We have the roadmaps which ask for comments and feedback, and the semi-annual meetings where members can ask questions and get involved.

There’s also the recent move to Mattermost which Harald Leithner pioneered and Luca helped facilitate, with over 290 joining in the last few weeks, clearly active members who are enjoying the better communication tools that are at our disposal with Mattermost.

I can see this move in our communication alone making a great improvement in the way we communicate and respond to events. It's still early days using it but already I am feeling it's more productive and collaborative which should translate to better communication and productivity.

Joomla is a tool that's relevant and needed, simple!

Its day has come again, because it's a product built by people doing their day-to-day job. Be an administrator, developer, or web agency. Joomla is made by people for people, not for money, shareholders or a corporate body. It's people who are building sites, seeing the changing needs, who are responsible for making this great product. Its unique governance structure, owned not by an individual or company but by a community, allows it to react to the business needs more than most site building tools.

And another great part of Joomlas' strength is the many hundreds of extension developers who fill in any gaps with a market solution. They keep responding to client needs and demands with great products that win by their ability to adapt and be the best.

The extension developers are so important to the success of Joomla as a whole and Joomla is also important for their success. Working together as much as possible, all shouting about the possibilities and achievements makes for a win-win environment.

So with these changes, a brilliant community I set about writing why I thought this change in the graph we opened with had happened.

But wait, there is one Easter Egg to come!

I then noticed that Joomla, yes Joomla, was the fastest-growing CMS

Well done to all who use, help to build and develop Joomla and its extensions, the people who put in the hours and think they go unnoticed. It’s not just the community that has noticed, it's all those people who are downloading and building their websites, their businesses on Joomla who have noticed and said yes, they want to be part of it, that Joomla is the right CMS at the right time for them.

We all did this together. We, the community, are Joomla’s beating heart. If you’re part of this growing community already: thank you. On behalf of Joomla and the millions of Joomla users worldwide. And if you’re not yet part of this community: come on board, sign up and join us on Mattermost. We can’t wait to meet you!

Since its creation, Phil Walton has been using Joomla moving his client base away from his own primitive CMS to Joomla!

Phil is involved in a few departments and initiatives, enjoying the community aspect of Joomla and learning much through the kindness of others.

A member of the London User Group JUGL and a developer in his company SoftForge. Phil also enjoys meeting up with other Joomla Users at J&Beyond and the JWC events.

An avid rower on the Thames, juggler, cricket fan, warm beer tasting expert and unicyclist, he is also a patented inventor and is owned by many cats that take terns in looking after him.