The battle for the Joomla-Monster cap, and the magical "yes" uttered by the one chosen heart, rewarding the people thanks to whom the Polish Joomla! story began – this is how, in a nutshell, we can describe what happened during the fourth JoomlaDay Poland, organized in Gdansk - the city of freedom, in the 10th anniversary of Joomla! in Poland.

The spirit of Joomla! and echo of Joomla talks for many weeks will be spreading in the corridors of the Science and Technology Park in Gdansk. All that thanks to the fourth JoomlaDay in Poland, the great generosity of sponsors, and the team of volunteers gathered around the Polish Joomla Center. It’s fair to say that for these two days, Gdansk turned into the capital of the Joomla community. The atmosphere of this meeting was great. 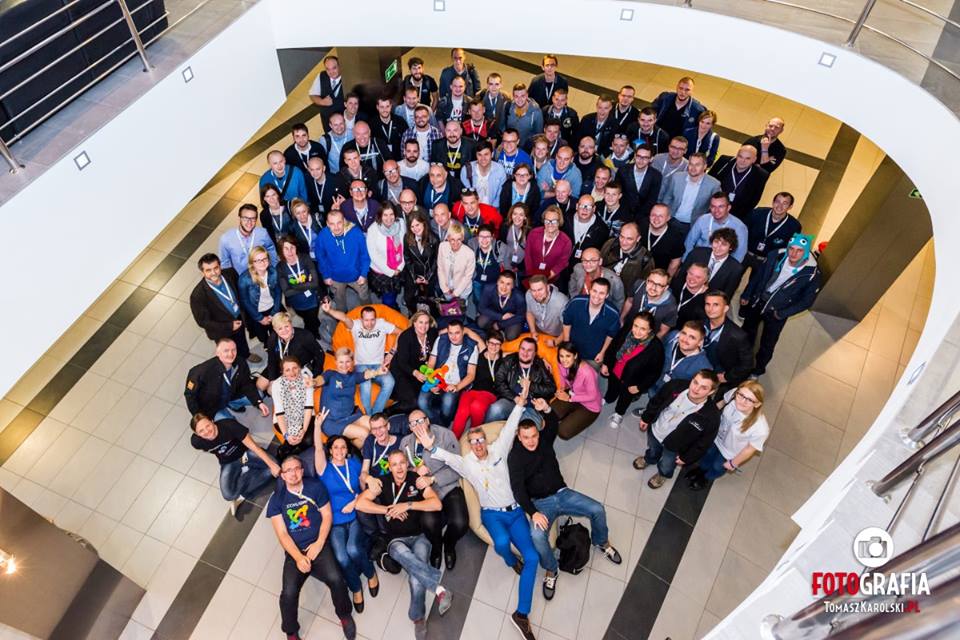 During the two-day conference, divided into the Business Day and the Community Day, 39 foreign and Polish speakers shared their knowledge during the keynotes and workshops. But that's not all. Many discussions took place behind the scenes during breaks and the afterparty held at the Hard Rock Café. Nearly 100 Joomlers filled the whole place. Discussions about Joomla and the community lasted late into the night. 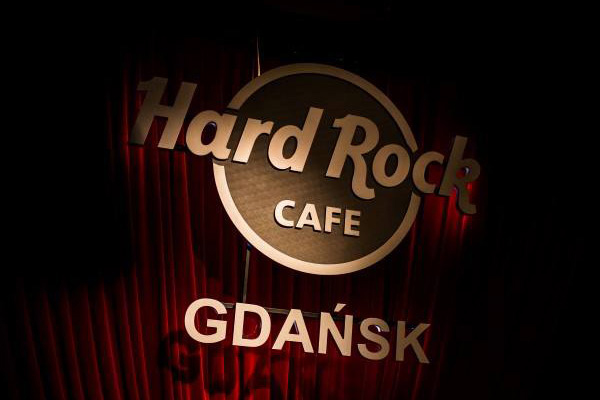 The guest of honor of the conference – Sarah Watz, the President of Open Source Matters, spoke about the state of Joomla. 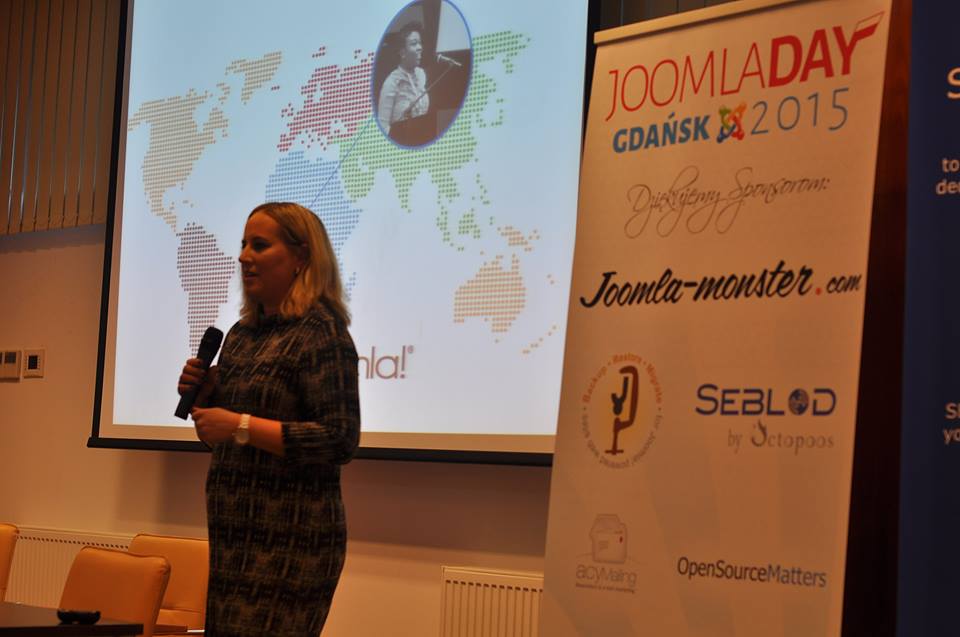 The conference program was prepared to meet the needs of every attendee – novice Joomla users, as well as experienced administrators or programmers, found something for themselves.

During the first day (Business Day) there were speeches about how to build a proper website that meets the requirements of WCAG 2.0, covering the secrets of positioning, as well as legal issues related to working as a freelancer. Just before the lunch break, Michał Sadowski, the President and Founder of Brand24, answered the question why you should know what people write and say about you on the internet. The room was full. After Michal’s presentation there were a few minutes to make individual conversation or take a photo. 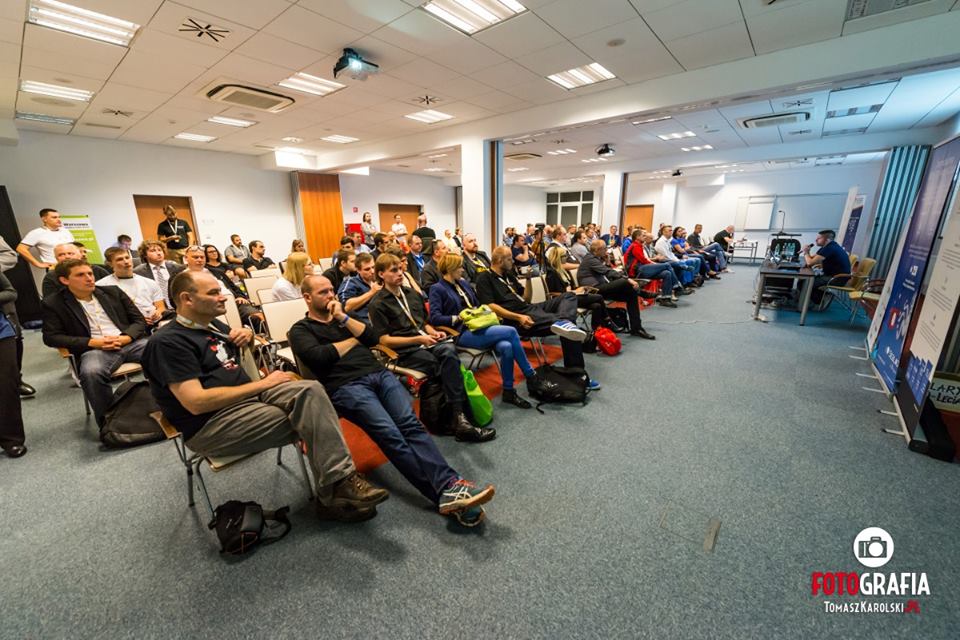 JoomlaDay Poland participants also had the opportunity to learn about the beginnings of the Polish Joomla Center, and about the leaders who started everything in Poland. Participants could also award nominated candidates within a special “10th Anniversary Pillar” award.

The first day of the JoomlaDay ended with a prize raffle, handing out commemorative certificates for lecturers, group photos, and the afterparty at the Hard Rock Café. 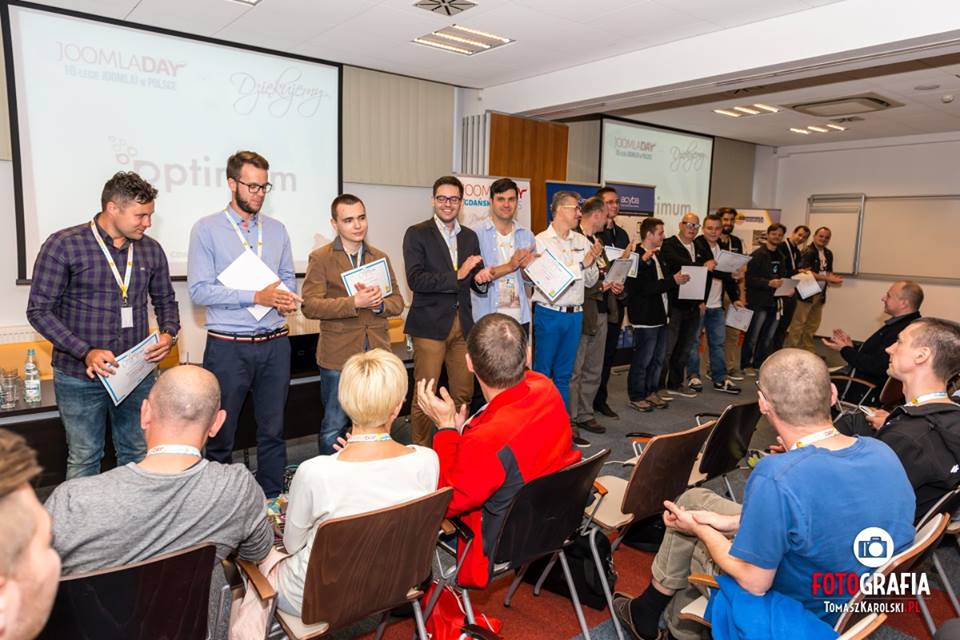 On the second day of the JoomlaDay (Community Day) there was also a huge bomb of knowledge. During many presentations participants learned how to deal with the administration of dozens of web sites, and how to use Joomla-tricks to spread the opportunities of the Joomla CMS. There was also the presentation of the project named “Kuźnia Dostępnych Stron”, carried out by the Polish Joomla Center.

In addition to presentations, a lot was happening during the Community Day in the literal sense of the word. What took place after one of the presentations, will be probably mentioned at every future conference. One of the attendees decided to propose marriage! It was a really pleasant surprise for everyone in the room. The Joomla User Group Trojmiasto organizers revealed that Asia and Miłosz met for the first time at one of the JUG Trojmiasto meetings, and said that Joomla! brought them together. It was the first engagement in the history of JoomlaDays. We are really proud that together we could participate in such important moment for the couple. Once again, we congratulate Asia and Miłosz and wish you all the best! 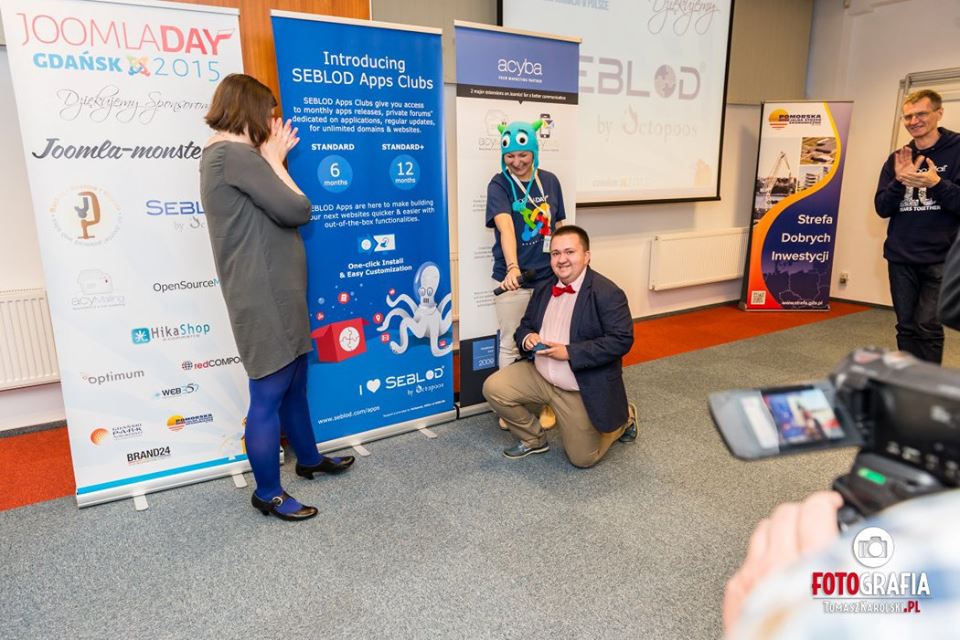 The second day ended with the traditional draw for valuable prizes from our Sponsors, handing out certificates for the Speakers, and honoring the “10th Anniversary Pillar“ plebiscite winners. Here are the people who have driven the development of the Polish Joomla! Community: Stefan Wajda, Michał Trzepizur, Michał Sobkowiak, Aleksander Wiśniowiecki, Danuta Idzik, Andrzej Herzberg, Sebastian Dajnowiec, Sławomir Pieszczek, Jean Marie Simonet and the Gavick Pro company for financial support for the organization of previous meetings. 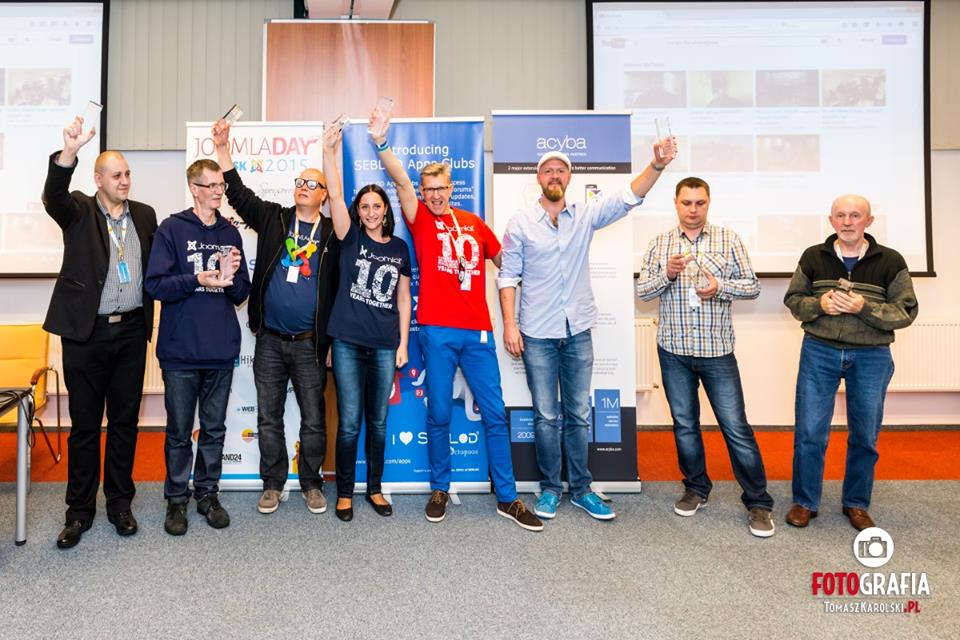 On both first and the second day, Tomasz Karolski, the photographer, watched and recorded what happened during the whole convention. Even during the afterparty Tomek never left his camera and when asked why he is constantly working he replied: “do what you love to do and you will never have to work”. Thanks to his work and commitment, he took nearly 500 photos of Joomla Day IV Poland.

We would like to thank all the attendees. This event was for you – for the Joomla! Community. We hope that these two days in Gdansk resulted in meeting new people, and that the knowledge gained here will help in your daily work with Joomla and that unforgettable nice memories will accompany you through the whole year till the next JoomlaDay Poland. 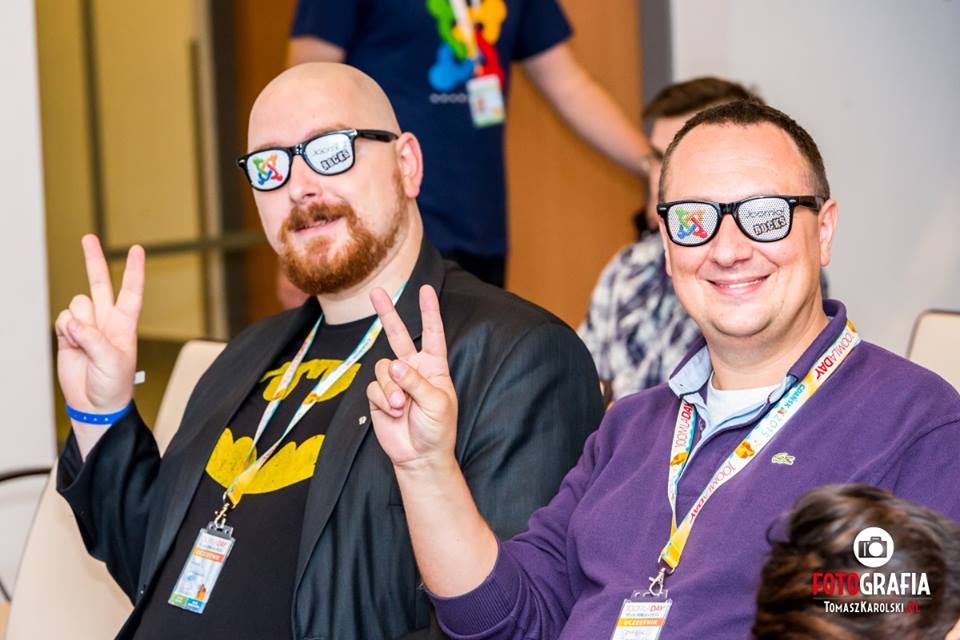 We would like to say “thank you” for the speakers for sharing their knowledge and experience during the whole conference. Thanks to you the JoomlaDay Poland 2015 stays in the minds of all attendees as an event where we got a huge dose of knowledge.

JoomlaDay Poland 2015 was one of the bright and outstanding Joomla events for me. I was very pleased to meet lot of nice people, the Polish Joomla community and speaking at the event is a very memorable moment. I should note the professional organization and high quality of the event: all guest speakers had their sessions in a special room, so it was comfortable for foreign guests not only to speak, but also to watch another session too. I did not even notice it was a local event. JoomlaDay in Gdansk was one of the best events for me. I want to express my gratitude and kind regards to the organizers for their great contribution and popularization of Joomla, and encourage them to keep the community up! Long life to the Joomla community in Poland!

We enjoyed the whole weekend! Gdansk is wonderful. I didn't expect such a nice city. Very nice and very helpful people. Everywhere! Even when they couldn't speak English, they were helpful. You know, I live in Hungary. If you can't speak Hungarian and you ask something in English, you won't be helped!

The Joomla days were fantastic. Good organisation. Qualified speakers. The visitors were real Joomlers: interested in everything going on in Joomla. Worth to visit again!

The tour for the foreign speakers through the city was very interesting. We visited the city for 1 1/2 days, but the tour made it complete.

First of all, people in the Polish Joomla team are all so kind.

The event was also very professional for attendees, lecturers and sponsors.
Two sponsors I know well, told me that anytime, any event, created by this Polish team, they'll sponsor again and come with pleasure.
For myself, I saw our future in your eyes, in your minds and in what you are all doing now.
Thank you very much, and if iI can help with my little UX lectures just let me know, I'll be there.

The Polish community is definitely one of the most (... the most?) vibrant Joomla community I've ever seen.
It was a real pleasure to have joined the event and we are proud and happy to sponsor it.
We usually do not go twice to the same country (except France of course...). We try to switch from one country to another so we can meet/sponsor/encourage other communities.
The JoomlaDay Poland is the only exception to this rule! And it's definitely because we - as international speakers - feel welcomed.

It was a very nice surprise to have this Sunday afternoon trip by the way! Thank you very much for that!

Olivier Nolbert (Seblod)
we recommend you to read his blog post here.

The people behind Joomla Day Poland created an amazing event filled with interesting sessions and community spirit. I am continually impressed with how much passion (and hard work) there is in the Joomla community. I felt really well received and looked after as a foreign guest. I do however think they should be warning foreign guests not to drink the water called "Vodka" it gave me a pretty bad headache ;-)

Like last year, the JoomlaDay in Gdansk was a blast!
The two days went by so fast. And the Polish community is always so heartwarming.
It was refreshing coming there.

Thank you all, have a great weekend, and see you again soon ! 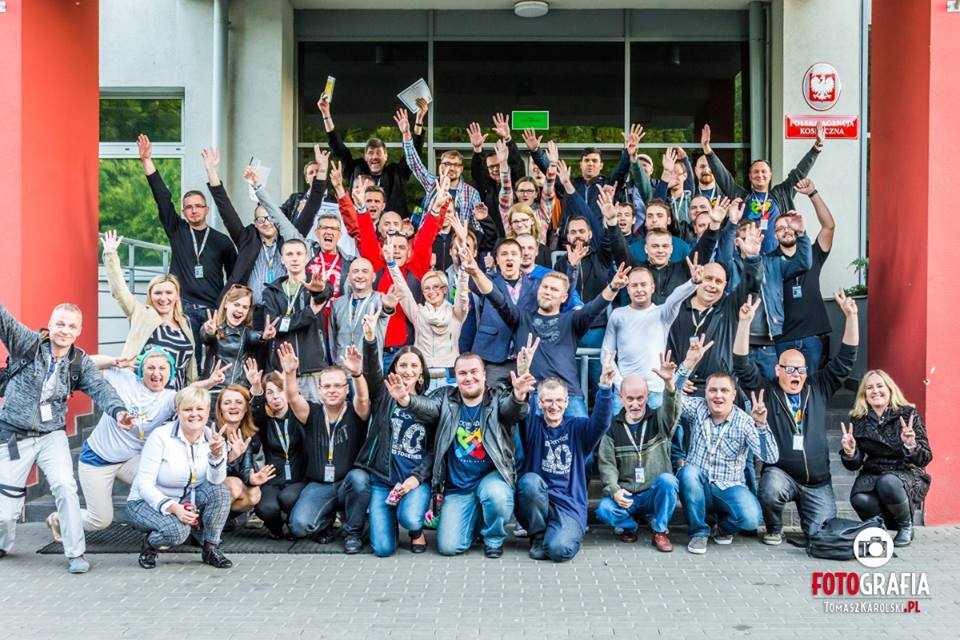 We really want to thank organizers: Stefan Wajda, Michał Trzepizur, Danuta Idzik, Justyna Michallek, Przemysław Wróbel, Aleksander Wiśniowiecki, Sebastian Dajnowiec, Ewelina Miśkiewicz and Katarzyna Karolska for countless hours of work devoted to preparation of JoomlaDay. Additional thank you goes to Michał, who is currently working on video materials from this year’s conference. All of them will be published on JoomlaDay Poland website soon. Come and check it!