Pizza, Bugs and Fun in The Netherlands It’s 6:00 a.m., my alarm tells me to wake up. Not a normal time for me at all to wake up and travel to the other side of the country. But that’s just a small sacrifice for a full day of fun with a lot of people, while contributing to the project and then finishing the day with a nice pizza.

Exactly a year ago the project organized a global Pizza, Bugs and Fun (PB&F) event. Companies, groups, and communities all over the world could join in and work on the reported bugs, either making patches to fix, or to test the fixes already supplied. 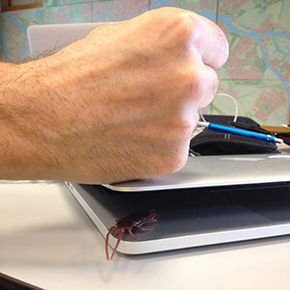 Somehow there is always a group of people within the community who think this work is way over their heads. But it’s not as complicated as it might sound to contribute to improve our CMS. It only requires some knowledge of how to use Joomla to begin with, and while getting to know your way around, you learn more ins and outs and features you might never had known about.

This is exactly what a small group within the Dutch community had in mind when they organized an event in The Netherlands, joining the global PB&F last year and tried to reach out to more people within the Dutch community to get them involved. Doing a presentation about the workflow, by helping them set up their testing or coding environment, teaching them how to create or test a patch.

The result was that we had a day of fun and learning, and a number of contributors that day began working on the bug tracker on a more regular basis at home. Good enough reasons to feel stimulated to organize this more often.

While at the Dutch JoomlaDays, a large number of attendees spent the Saturday evening working on the bug tracker, and a smaller group contributed to the translation of the documentation. A new global PB&F wasn’t planned so far.

So, we got together with the organizers from last year, and fortunately we had saved all of last year's ideas in a document. One of the (many) Dutch Joomla User Groups found a perfect location: a local transport company in Rotterdam (RET) that could provide us with a room and a good internet connection. We picked a date and that’s practically all there is to it to organize. Well of course promote it a lot in advance so people can sign up. And find a nice place where you can eat pizzas with a big group, but that just takes a couple of telephone calls. 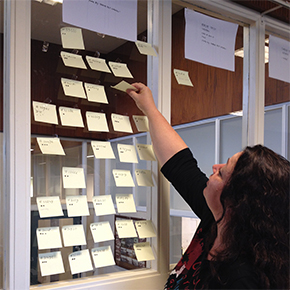 To be sure that the attendees would not get lost on the bug tracker not knowing what to do, Roland Dalmulder and I spent a few hours the day before listing a number of issues. We wrote them down on sticky notes, so everyone could easily pick one and work on it, thus preventing everyone from starting at the top of the list.

It all worked out amazingly well. On Friday, July 11th, a group of about 30 people worked on fixing bugs and testing them. We had some small prizes: for the newbie who learned the most, the one who did the most tracker items, the one we suspect who will not be able to stop and will work all night through. All just contributing to the fun we had.

While it is not easy to give exact numbers of all the results, the volunteer activity statistics showed a great list of Dutch contributors that day, and the chart of tracker issues that were opened and closed showed a clear spike. Not alone, the Dutch attendees that day sent tweets and messages on social media and skype groups, which inspired people at home to also to join in. A special thanks goes out to Thomas Hunziker who helped us all day committing all the fixes we worked on. And let’s not forget the contributions to the translation of the documentation. Not only bugs were fixed that day! 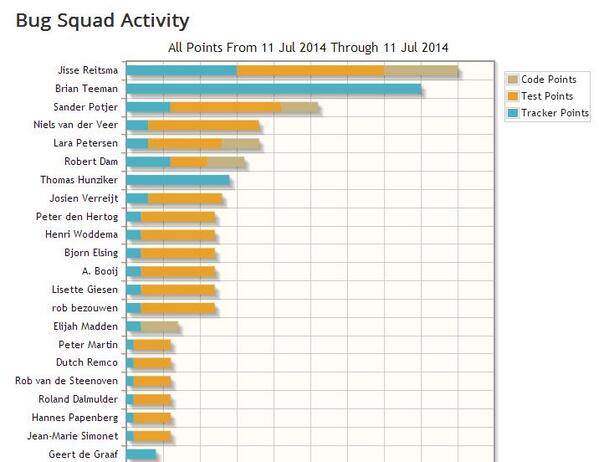 Resuming, it’s fun to organize a simple event in your local or regional community/group, helping to contribute to Joomla and improving the CMS we all love to work with. I hope this report inspires a lot more local and regional groups to take this same initiative. You are of course welcome to learn from our experiences and ask our organization for some tips.

A report in the Dutch language can be found here.