Written by Martijn Boomsma | 10 December 2016 | Published in 2016 December
Joomla made an appearance at HostingCon Europe 2016 (http://europe.hostingcon.com/) in Amsterdam, the Netherlands. As the name suggests, this was an event for cloud and service providers from Europe. We were asked to represent Joomla and given an expo booth to share about Joomla with a good few hundreeds of attendees.

Thanks to Mike Demopoulos there were some good contacts between HostingCon and Joomla, see his and Jason Nickerson’s report about their visit to HostingCon Global  https://magazine.joomla.org/issues/issue-aug-2016/item/3098-joomla-attends-hostingcon-global-2016 This gave us a good chance to visit and promote Joomla at the European version of this event.

So me, Sander, Dennis Buis and on Wednesday also Peter Martin put the beautiful Joomla booth in it’s place right across the keynote room, eagerly ready for the masses ;)

We can’t say our booth was packed from start to finish of the event, but overall there were a lot of people coming over now and then and asking about Joomla. Either “what is Joomla”, or “what is Joomla doing here?” or “I’m using Joomla for ages!, good to see you here!”. And we gave away tens of our Dutch Joomla Magazines. So I guess, all in all, the Joomla promotion was generally a success. It was also fun and interesting to speak to other exhibitors like @wwdevries from Patchman and the folks from Weebly. 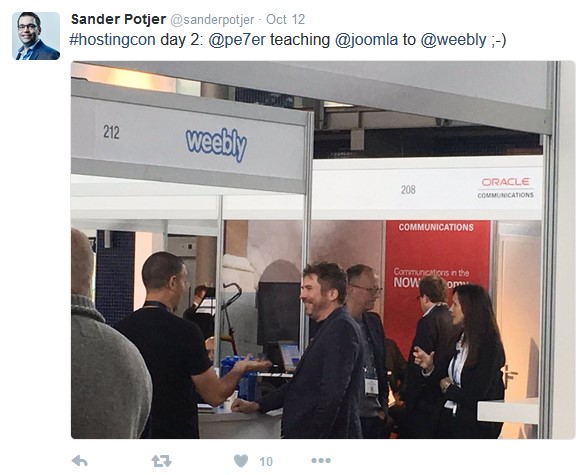 For me it’s fun to represent Joomla wherever and whenever I can because I love Joomla. It’s a great tool with a great community behind it. I also think it’s super when these kind of opportunities arise. So, thank you to HostingCon Europe for making it possible. Hopefully we can continue doing this, next up: http://global.hostingcon.com/hcg17