JoomlaDay Bangalore, yeah we did it! Almost a year ago, Bangalore was striking social media channels with JWC 2015 hashtag and here it was back again. This time it was JoomlaDay Bangalore, India #jd16in. Yes, it finally happened with the initiative of the Joomla User Group Bangalore.

Every event has its story and JoomlaDay Bangalore has one too. 28th August, 2016 in Microsoft Office the registration process started early morning at 8:30 am. It was quite an overwhelming moment to see the attendees’ enthusiasm. We are grateful to Microsoft for being our event partner and providing us such wonderful ambience and catering. We are a team of six people and every person knows his piece of work very well. Ruchika was the host of the event, welcomed the audience and paid attention to everyone’s needs during the event. Puneet handled the sponsorship work and also filled energy in the attendees with his welcome remarks. He started off with an energetic boost of handshake of attendees and urged them to introduce themselves to their neighbors to break the monopoly of formality. Rishi was the person who handled the website work. Vinod paid attention to all the detailing and along with Rishi, he decided about the sessions and speakers. Arjun and Vishwa played multiple roles and coordinated with everyone. We also thank Abhishek Agrawal for capturing our event into amazing pictures. 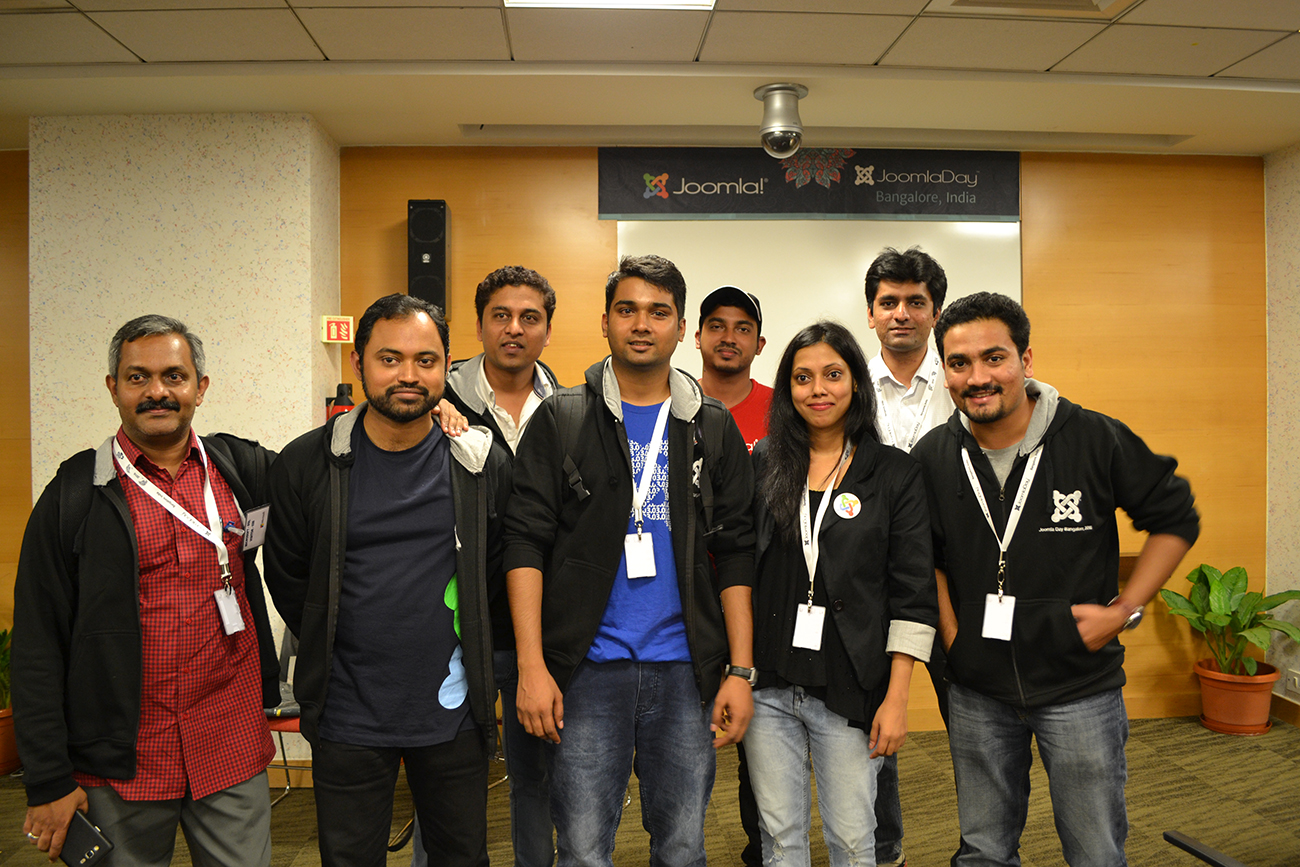 When we thought of having the first JoomlaDay in Bangalore, we mainly focused on making the audience aware of Joomla! We aimed to spread a word "Joomla!" among all. Therefore, we focused on dual audience - Developers and Students. As our event tagline "Learn, Connect, Collaborate", this was a platform for everyone to gain and share their knowledge, make new connections and to wake the interest of contributing in our Joomla community.

The sessions were chosen very carefully so that we could cover the interest of our dual-audience. There were two keynotes:

A special session was on “How to get started with Joomla on Azure”, by the Technical Evangelist of Microsoft, Abhishek Narain aiming on easy building of CMS Joomla on Azure. Apart from the keynotes, there were 8 more sessions diverged for our dual-audience.  Every session proved to be a great learning tool for the attendees. The involvement of all the attendees and curiosity to learn more and more was amazing.

JoomlaDay Bangalore speakers were from different parts of the sub-continent. We are very grateful to each and every speaker who shared their knowledge with us. We presented a Joomla! cap and laptop sleeve to our speakers as a vote of thanks.  And a special thanks to Vinod and Rishi who collectively took a session on “Basics of Joomla” as one of our speakers had a sudden emergency.

Any event is incomplete without the support of sponsors. The whole JoomlaDay Bangalore team is grateful to each and every sponsor for their support and lovely goodies. Sponsors played a vital role in gifting our attendees a beautiful smile on their face. Microsoft, J2store, Joomshaper,  Compojoom, Techjoomla, Themexpert, Siteground, Yireo, Cloudaccess, Sellacious and KNS Technologies. 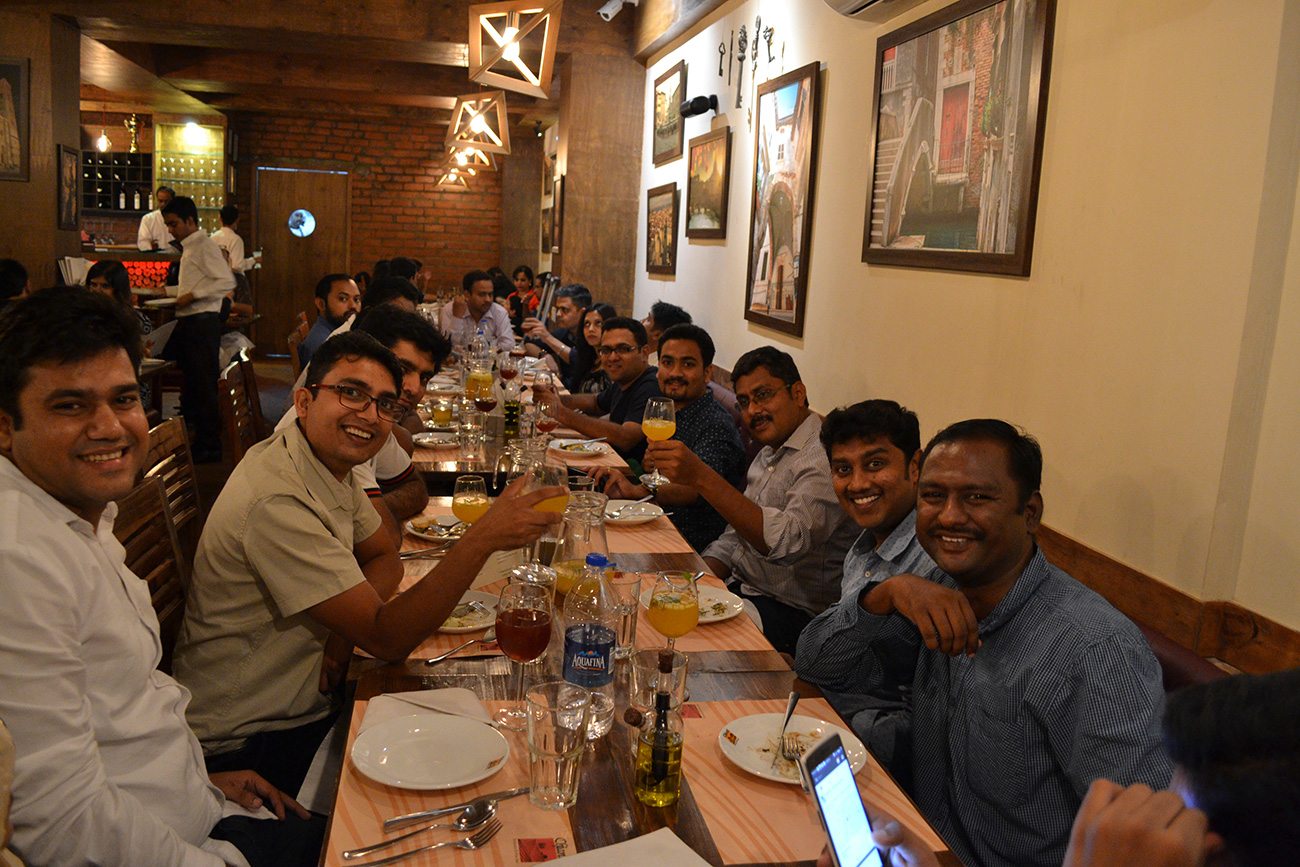 Informal Hangout: Right from cultivating the thought of JoomlaDay Bangalore, we never thought it to be a formal one. It was a single day event and therefore, we decided to hang out with the speakers and organizers at the dinner table at Chianti Restaurant one night before the event. It was quite an interaction with everybody.

Lucky Draw: We organized two lucky draws at the end of the event and it was terrific to see the enthusiasm among the audience.

We achieved what we wanted i.e. left a smile on our attendees and speakers' face. The whole event wrapped up on time and everything was aligned very accurately. Many attendees provided a feedback and requested us several topics as well to cover in future events. Once again thank you everyone for contributing in making this event successful. We got new members who are willing to join our JUG group Bangalore and volunteers for future events and most importantly we were able to gather a huge number for contributing in our Joomla community. This was just the beginning and now we wait for the next JoomlaDay event. We assure you it is going to be more amazing than the first one.

At the end, I would just like to share a small line said by one of the student who attended our event. When he was leaving, he came to me and said 'Thank you, for making my day awesome’ :-)