GSoC: Every Story Has An Ending. Every Ending Is A New Beginning.

Google Summer of Code 2016 came to an end. This article will give you a quick look at what really happened during the 3 months period and the results myself as well as our JavaScript testing team reaped out of it. 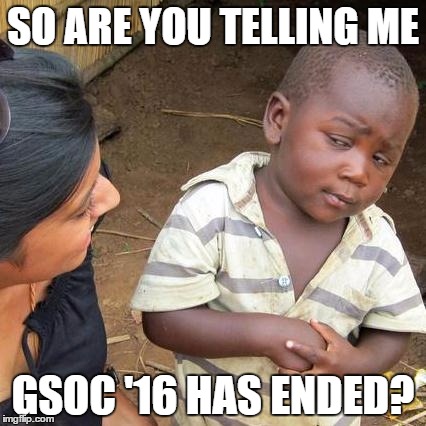 As a Joomla! GSoC student, I worked on the JavaScript testing project which introduced JavaScript testing for the JavaScript libraries in Joomla!. Now that the program is over, it would be quite reasonable to say, myself with my mentors Ashan Fernando and Yves Hoppe could achieve more than what we had in mind in the beginning. A stable testing environment was setup with Jasmine and Karma. The tests were also configured to run on Travis. In cases the existing code were not testable, we refactored the code and improved their testability. Above all, a comprehensive test suite was written to cover almost all the existing JavaScript libraries along with a detailed, easy to follow documentation.

Testing always is a requirement in any kind of large software system. The final outcome of the project is mainly going to save developers from a lot of unnecessary hassles. Of course the benefits are not limited to that. I have explained the importance of this project to joomla! in detail in one of my previous articles which you can read from here.

Considering what we have achieved so far as a team, I feel really proud and satisfied. It was not just coding I did during the program. It was much more than that. The whole experience was amazing. Getting to know new people and making new friends. And with respect to the work done, the feedback I have received from my mentors and the community always make me feel I accomplished something great.

Most of the people tend to see GSoC as a coding program. That is really far from the truth. If you are lucky enough be with an organization like Joomla! you would definitely learn a lot more than that. It is true that the project was technical and I got the chance to learn concepts in testing and earn experience using technologies like Jasmine and Karma in and out. But my mentors gave me advices even on how to market things and get people interested in listening to what I have to say. We had to write articles regularly during the program and each of them gave me some learning on writing things better.

From the very beginning of the program, I felt really glad I got the chance to become a part of this awesome community. Our GSoC program admins did an amazing job at making us feel welcomed and motivated throughout the program. The perception I earlier had regarding Open Source contributions was like it is something dull and boring. But it was a totally different story with Joomla!. The experience I got with Joomla! was quite the opposite of that. Everything about it was so interesting and exciting and I look forward to keep helping Joomla! being a part of it even though the GSoC program has ended. 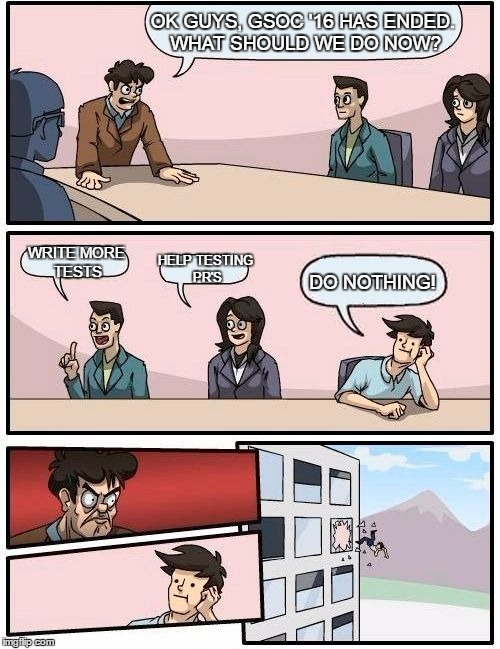 For those of you who are interested in knowing more about the work I did, you can checkout the PRs I made to the Joomla core repository here. All the PRs related to the main scope of the project have already been merged and is being used live in the core. It makes us really happy to see other Joomla! developers also writing new tests for the new JavaScript libraries and functionalities they develop on top of the testing setup we introduced.

Furthermore, all my previous articles I wrote regarding this project can be accessed from here. And for those of you who would like to write new tests or try out the work we have done, everything you need to know is in the documentation I wrote which is accessible from here.

Many thanks goes to everybody in the Joomla! community that helped in making it all happen.