On a breezy Chicago summer day, the opening keynote of the first Joomla! Developer's Conference of the current decade tackled the challenge of demystifying software licensing with an episode of, "Who Wants To Be A Millionaire Developer?"

Dozens of the most talented developers from all over the US were gathered to talk about and study code at a Nerd Center, four intrepid game challengers were posed with some challenging real world scenarios, winning points as they revealed the subtle intracacies of software licensing. 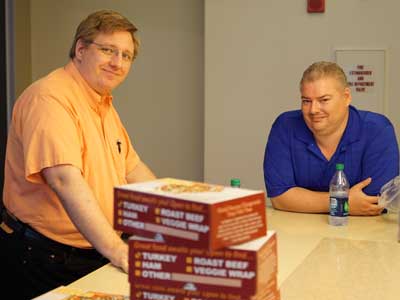 Duke Speer helped attendees discover their artistry as a "Code Poet" and that when they do, "Copyright Happens!" OSM President Sarah Watz also sent greetings from Stockholm and challenged those attending to be both bold and brave with Joomla's code. In true Joomla style, instead of following the pre-announced tracks, the event became an "unconference."

OSM Director and Conference Organizer Mike Carson surveyed the group and formed sessions that covered the topics of greatest interest to the attendees. Jonathan Shroyer led a 90-minute session that explored what a developer needs to know about designing for the front end, recounting some of the best practices he has discovered for including bootstrap styles as the syntax to make components work well with as many templates as practical, including those that are not based on Bootstrap. 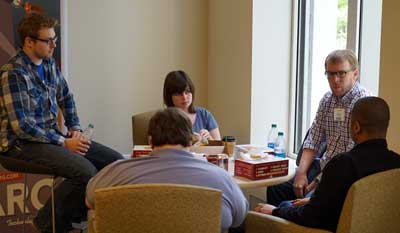 All three instructors, David Hurley, Michael Babker, and Jonathan then participated in a panel discussing the Roadmap for the Joomla 3 series, and some of the challenges being undertaken by the leadership team and core developers. The talk included the work needed to achieve a lighter weight and more nimble core, and the efforts being taken to maintain a more highly stable and backwards compatible API for extension developers.

After that, Mike broke the group into sessions by skill level and interest. Those new to component development spent the next day and a half with David Hurley going through component development 101, learning the Joomla way of constructing models, views and controllers in a maintainable manner.

The designers in the group who wanted to learn advanced template design met with Jonathan and went line by line through the anatomy of a well constructed responsive template. The experienced coders gathered with Michael Babker to cover everything from the esoteric to the sublime. 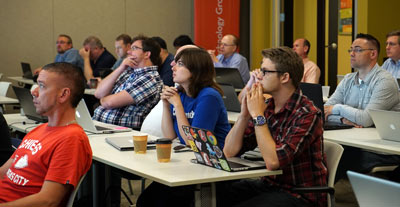 The sessions were spirited and there was no shortage of situations being raised in an attempt to stump the expert. In the final hours, two of the groups joined together for a demonstration of the Joomla Framework, including a lively discussion of how it could again disrupt the marketplace with new solutions.

Typical of most community events, the true value was in the informal networking between leaders in the extension development field. From locals like Arc Technology any Savvy Panda, to those who traveled in from both coasts such as Polished Geek from Norh Carolina and Matt Simonsen and Jonathan Cameron, both from California. The clear consensus was to build on the success and do it again, even bigger and better!

Most of the developers also stayed over for JoomlaDay Chacago and are depicted below. 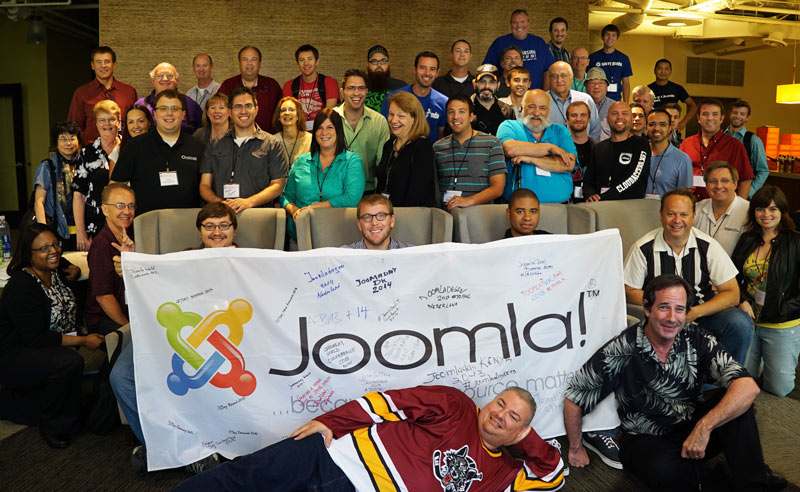