Seeing how are open source technologies can make a real difference in someone's life is something quite special, but see how it can help a nation to develop into the central hub for technology is just inspiring.

Joomla!Day Kenya was my first visit to Africa, and I really didn't know what to expect. I had heard there was a lot of suport for Open Source technologies in Kenya and Africa as a whole, with there already being several Joomla! user groups in existence across Africa, but none in Kenya ... yet.

It was quite a long journey from the UK, with a six hour flight and a six hour stopover in Dubai, followed by another six hour flight, so by the time I got to Kenya I was quite tired and very pleased to see a familiar face in the crowd when I cleared immigration and customs at Jomo Kenyatta International Airport (JKIA) in Nairobi!

Local businessman and Joomla! fan Ken Oduor Jagero of Koa Media was given the task of looking after the international speakers at Joomla! Day Kenya, and his first challenge was to extricate his car from the airport 'car park' .... three hours later we arrived at our apartments, right next door to the conference venue on Piedmont Plaza, Ngong Road.

I had arrived before the rest of the international speakers - Jacques Rentzke (OSM Board member & Trademark team lead) from South Africa and David Hurley (Joomla! Community Development Manager) from America arrived the following afternoon having had equally exciting attempts to escape the car park!

Joomla! Day Kenya is in its second year, being held again in central Nairobi and inviting local Joomla! fans to join in the day-long conference.  The event was held at 88mph, a co-working space in association with HumanIPO, encouraging entrepreneurs to start up businesses with support from some major players including Google.

It was great to see so many young people and students attending the event (a large bus-load arrived from the local Strathmore University, which has an established history of supporting Open Source technologies) with a clear interest in open source technologies and Joomla specifically.

After a rather stressful afternoon cursing at technology and cameras, the Joomla!Day Kenya set up a Live Stream from the event, which was broadcast in real time around the world - and watched by many!  It was a great way to share the day with international Joomla! fans, but also to engage other Kenyans who were not able to get to Nairobi for the event.  You can watch the recording at: https://www.youtube.com/watch?v=zX_Kqwl8VII

I gave a short introduction to the developments that had been introduced with Joomla! 3.x and how these were relevant to the Kenyan market, which has of of the highest proportions of web traffic coming from mobile devices worldwide. This was followed up further by David Hurley who spoke about developing sites for mobile devices, and how this is becoming more important in the ever developing world of technology in which we live, and Jacques Rentzke talking about how to 'Find the start button' in Joomla! - some great tips for getting started with Joomla!.

There were some fantastic speakers from the local community including one which had many heads nodding in the audience! Brendah Mwirichia who runs the business called Peak and Dale Solutions in Nairobi spoke about how to build and develop as a Joomla! business.  She covered a range of topics including how to develop a portfolio, how to sell what you do, how much to charge, and the cruicial importance of valuing your services. Many of the points raised were relevant to anybody running a business in the tough economic climate we now face, and particularly useful to the students who attended - many of whom have their sights set on running a business once they graduate.

Other speakers covered topics in areas of SEO, security, Google App engine with PHP Support, and more. As with any Joomla!Day event perhaps the most valuable part is the networking - listening to conversations ranging from how to find an extension for a real estate website in Joomla! 3 through to where to find freelancers for graphic design, it was clear that everybody who attended the event took a lot away - lots of business cards were exchanged too!

Of course, no Joomla!Day concludes without the compulsory signing of the Joomla! flag by the organisers! 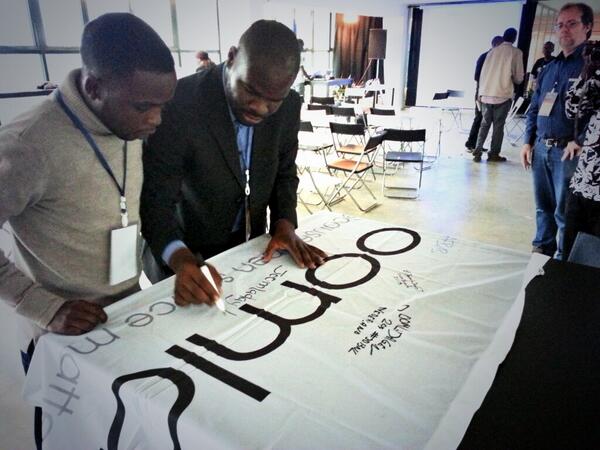 It seems clear to me that Joomla! is very much a central part to the technology industry in Kenya, and there is a growing community in Nairobi which is keen to embrace and help develop the Joomla! project in Africa ... my parting challenge to the business owners and students was to set the wheels in motion for the creation of Joomla! User Group Nairobi .... watch this space!

As many of you will know, I was caught up in the aftermath of the fire at Jomo Kenyatta International Airport (#JKIAFire for those on social media) - the blaze broke out at 5am on the morning I was due to return home to the UK - thankfully there were no serious injuries but the airport was completely devastated.  It took a little over two days for the airport to resume international flights, luckily I managed to get a seat on one of the first flights back to the UK (very grateful for the travel insurance!).  I am absolutely in awe of the response of the Kenyan government, Kenyan Airways, and all the staff at JKIA for the way in which they have stared adversity in the face and just 'got on with it'.  Although check in was a little chaotic, everything else was dealt with in a very calm manner, organised and efficient if a little old fashioned (walking up the steps to a 777 is quite a long way, didn't you know!).

I wrote a bit about how they responded on Social Media on my blog, I was that impressed!

Thank you to everybody for making sure I was OK and keeping in touch in those few days in limbo, it was very much appreciated :)