Are you familiar with Joomla 3.10? At this time, for sure! Well, Tobias Zulauf is the release lead for the latest version of the Joomla 3 series. Tobias started collaborating in the German community ten years ago and became more and more involved with the project, currently participating in several production teams.

Thank you for participating in this interview, Tobias! Tell us a little about yourself.

My name is Tobias Zulauf. I'm from Germany living next to Cologne. Right now, I'm the release lead for Joomla 3.10, and I’m involved in many production-related teams.

How did you get involved with Joomla and the J! Community?

Our school's webmaster, who built the school's website with Joomla, was also my computer science teacher. In his class, I then built my first Joomla site. Following that, I joined the German support forum and got involved in the German community. Around 2011 I joined the JBS, and over the years, I got involved more and more with the project, built and published my own extensions, talked at a few Joomla events about different topics, met many great people in and outside of the Joomla Project up to now nearly ten years later where I have been promoted as release lead for 3.10.

What do you do for a day job, and if this includes Joomla, how?

I’m working in the IT department of my company as an internal consultant on the SAP NetWeaver Business Warehouse, so my day job does not include anything about Joomla. But my involvement in Joomla in terms of programming and web technologies helps me a lot in my day job, even when it's not a PHP program that I write but an ABAP program and not a website that I build with Joomla but an Analytics Dashboard that runs in the browser.

Do you use Joomla in other ways?

My Joomla related website is built with Joomla, of course, but besides that and my many development sites, I don't run other sites with Joomla. I still use some of the Joomla Framework packages on projects to automate stuff I need, like, for example, our jgerman-bot that helps us as a German translation team stay up to date with all translation changes done on the core CMS.

Are you involved in the Joomla community, apart from in your official position?

Yes, I regularly connect with the local JUG here in Cologne and attend JandBeyond, Joomla Days and other Joomla related events primarily here in Germany.

As part of the JGerman team, I'm also translating Joomla into German, and besides all of that, I’m a moderator for our local Joomla Forum and a member of the team running joomla.de.

How did Joomla change your life?

That's a big question that is hard for me to answer. Generally speaking, working with people from all over the world helped me learn a lot over the years, and on top of that, allowed me to meet many interesting people and find friends all over the globe. Working with people in and around the Joomla Project helped me grow, upgraded my general English skills, and become a better programmer every day. All of that is also very useful when not working on Joomla related projects in the IT industry.

What did you learn and/or gain personally from being a J! Volunteer?

That’s a very open question too, which is similarly difficult to answer from my current standpoint. Looking back, I can say I have learned a lot on the technical side of things, meaning how to think like a programmer and how not to do them. As a non-native speaker, my English skills in writing and even speaking have been massively grown alongside working on Joomla, while they are still far away from good.

Do you have a memorable Joomla-moment?

When I answered this question right before the Joomla 3.10.0 and 4.0.0 releases, I talked about my first JandBeyond in Prague. It was a great experience to first meet many international people at an actual live conference that I only knew from messages and GitHub before; that is still a very memorable Joomla moment for me.

But now that my first stable releases of 3.10 are out, as of this writing, we are at 3.10.2, my most memorable Joomla-moment has to be the 17.08.2021 and the night before that. Let me explain that. George, Philip, I, and others were sitting in a Google Meet room and preparing our releases to coordinate the release. It was a very intense time as more things than planned had to be ready to make the final release of 4.0.0. Lucky us, the final packages of 3.10.0 were prepared a few days before already. After nearly 12 hours sitting in that chat and preparing stuff, we were confident that the package we had built was ready now, George uploaded that package to our S3 folder, and we said ok let's take a break, and the next morning we would do the release all as planned.

I thought, ok, I have access to that final package. Let me be the first guy to install 4.0.0 stable. So after closing the call, I downloaded the final package from S3 and set up a local installation of it. I have installed 4.0 in the development phase a few hundred times, but with the stable version right at the end, the “Remove installation folder” button is not there. After looking in the code, I quickly saw the issue, that button only shows when we are in development mode, and up until now, all releases were a development version, so this issue never happened to someone. So without a patch, no one could do a clean install of J4.0.0 stable, which is not ideal. On the morning of the release, we were in a Google Meet room again, discussed the issue and fixed it with some more issues that came up right before the release, so it took some more hours to get 4.0.0 out.

To sum it up, the night before the release of 4.0.0 and 3.10.0 up until the release was finally out was a very intense time with many people in the background helping to make it happen, and I’m happy that I was and still be part of that team. Thanks. 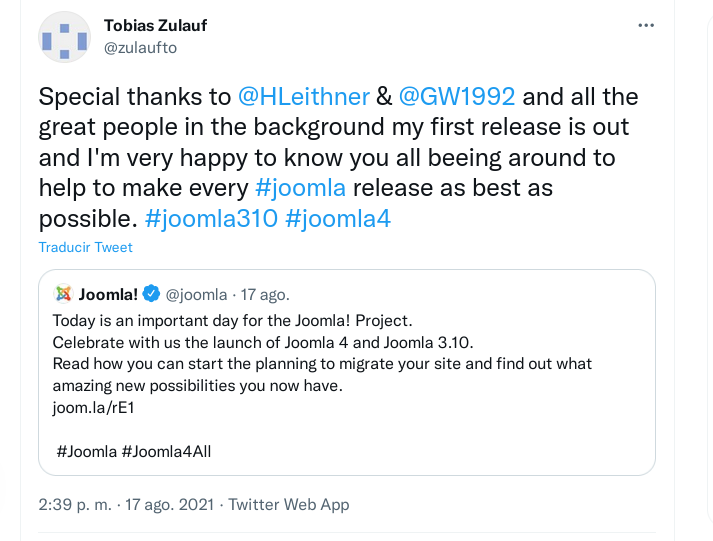