What would 2020 be without another event that’s run differently? We couldn’t supply pizza to JUGs this year, so participants around the world made their own for PBF20!

On Saturday 17 October 2020 Joomla! Pizza, Bugs & Fun (PBF20) went online as a virtual event due to COVID-19. Over 100 participants representing 22 Joomla User Groups in 13 countries contributed to the weekend’s activities including Flo the Cat.

In the past for PBF events, Joomla’s supported local events with pizza for each of the locations so that JUGs could spend the day coding and documenting for the project.

With this year being a virtual at-home event, that became a bit harder to manage, so instead, pre-event Luca Marzo & Giovanni Genovino put together a training video on making a homemade authentic italian pizza.

Throughout PBF20, a steady stream of pizzas appeared in the in Glip channel as well as on Twitter: 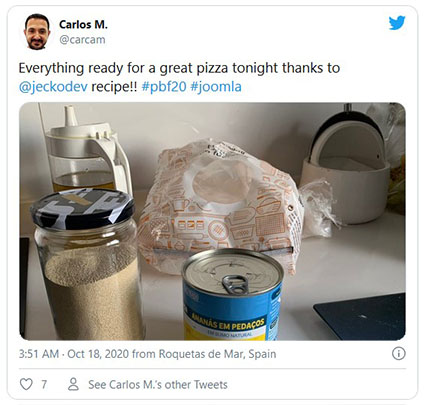 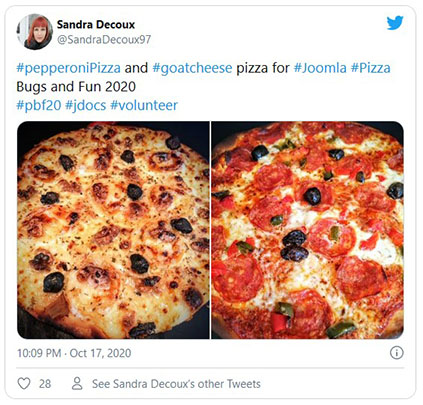 Other groups that had a few people able to catch up for the day shared their cardboard plated creations: 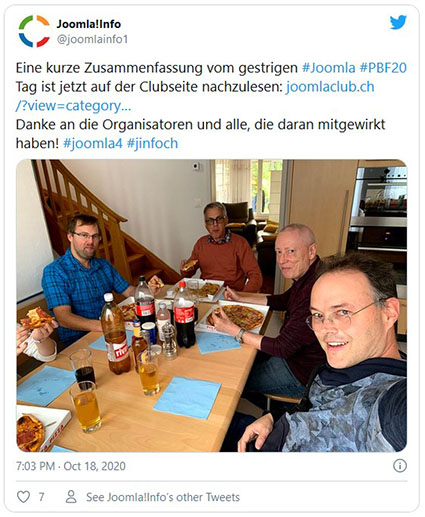 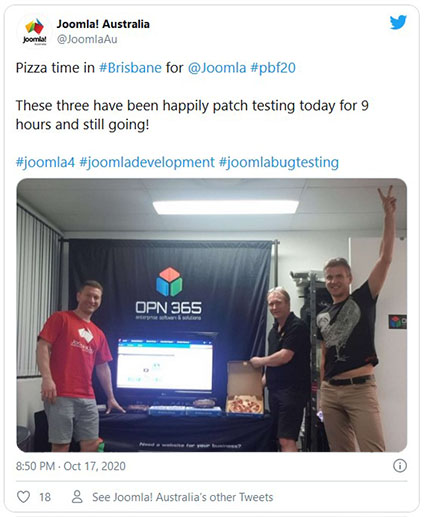 Pizza wasn’t the goal for the weekend. Knocking out a few bugs got attention throughout the day. All round, a fantastic effort was made by everyone:

With many seasoned participants in the mix the quality of the testing has improved, with several issues being not only tested, but improved with code submitted on the day.

It was also great to see a number of new contributors come onboard, increasing the number of people learning how to perform the essential tasks needed to get improvements merged into Joomla.

Going online saw plenty of international banter throughout the event alongside the more traditional in-person connections made where some JUG were able to still meet in small groups in person in some parts of the world.

Hopefully we’ll be able to return to more in-person events for 2021, but with the addition of more global event channels JUGs can connect to for access to support teams to help with answering questions, seeking clarification on PRs or watch training sessions run in other parts of the world as part of the event. 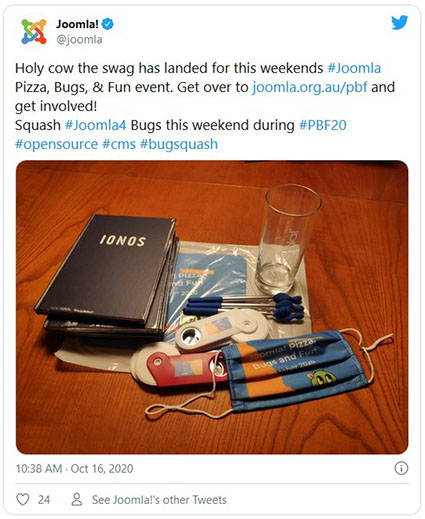 In the lead up to PBF20, a number of participants completed the pre-event challenge which involved completing a few simple tasks to get set up for PBF20.

By getting themselves set up on Glip, GitHub and Joomla Docs, then doing two tests or creating a PR in Github, and making two edits on Joomla Docs, entrants then received a PBF Survival Kit that includes a pizza cutter, PBF20 glass, PBF20 Facemask, mousepad, pens and notebook from event sponsor IONOS.

You can pick up your own PBF merch from the Joomla Shop.

PBF20 was also a Hacktoberfest event, so participants with four PRs during October can score a tee or plant a tree (see website for info)

Without sponsorship Joomla events are much harder to run, and so we thank our 2020 Gold Sponsor, IONOS by 1&1 for joining us for this year’s event. Thanks to their support, we were able to set up 300 Joomla 4 instances for testers to use for patch testing and participate in PBF20. The event also had an instance of BigBlueButton Open Source Web Conferencing running on the IONOS hosting as well, which worked well to allow different participants to connect to work through solutions on the weekend.

PBF20 also thanks our other supporters:

PBF20 carved out a big slice of the remaining tasks required to get Joomla 4 launched. But there’s a plethora of tasks still to be completed.

Since April, Bugs & Fun @Home has been running every Saturday in an attempt to work through the tasks remaining, and will be running regularly each Saturday going forward. It’s a bit less intense than PBF20’s concentrated effort, but if you’re free and have now got a taste for any of the activities that made up PBF20, join us for as little or as much time you have to spare.

At time of publication Joomla has

The Joomla Community is also entirely volunteer run, so if none of the above are of interest, but you still would like to help somehow, take a look through the Help Wanted pages on the Joomla Volunteers Portal and reach out to any team you’re interested in helping with.

Before moving onto 2021, special thanks needs to go to the entire team that put together PBF20, especially team leader Benjamin Trenkle. 2020 was my first PBF, and talking to him regularly in the lead up I know that many many late nights were put into getting everything ready for this year’s event. Particular thanks also to Philip Walton, Christiane Maier-Stadtherr, Llewellyn van der Merwe, Harald Leithner, Luca Marzo, Sandra Decoux  & Mike Brander for their work in coordinating the event, including wrangling Benjamin, and making sure participants had plenty to keep them occupied.

Philip Walton’s already coming up with ideas for PBF21, and I’ll be joining the working group team to help with next year’s event too. If you’re wanting to get more involved with coordinating your local event for next year, get in touch in the PBF20 Glip Channel, or even simply leave a comment below and I’ll be in touch.

Keep an eye out at www.pizza-bugs-fun.com and Joomla’s social media channels for inspiration, information and announcements on what’s planned for next year.

In the meantime, keep testing, coding, documenting and translating… Joomla needs you! 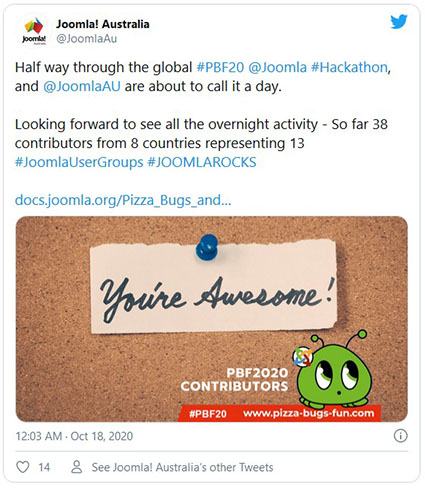 This year was really a challenge for the PBF team. Having COVID-19 around we decided to have an online event, which was new in such a format.

So I personally want to thank you again Christiane Maier-Stadtherr, who like always doing a hell of a job in the background, organized the website, the PBF kits (sitting with me till 2am in the night to send them out), was always available when a helping hand was needed. Thank you Christiane!

Philip Walton who kept the energy level high (we had really a lot of challenges during the planning phase and he always pushed forward), prepared the people with Bugs & Fun @Homemanaged with Patrick the whole day.

Patrick Jackson who did an awesome job in the preparation phase and during the event itself, where he was available for everyone, helping everywhere and hosting the chat.

You guys rock, without you the event wouldn’t have been possible!

But of course all the other supporting people should not be forgotten, translators, marketing, documentation, production etc. I really think that’s the strength of Joomla!, if needed, the community is here to help.

Last but not least thank you to you participants, you made the event alive and a big success!

Well, that sounds really like parting words you may think and yes, that true. For me personally this was the last PBF I will be an organizer for. I want to focus more on my upcoming role as Release Lead for 4.1, Google Summer of Code and the Joomla! Enhancement Development Team. But seeing all these active Joomlers, I’m certain that the next year PBF will step up and be a great event again.