JoomlaDay Brasil 2015: The Biggest in History The Joomla! Community in Brazil, Joomla! users and people interested in Open Source Software got together in September in Brazil's Capital Brasília to celebrate the Joomla! 10th anniversary and learn more about the CMS. Attendees came from 12 different Brazilian states and we had international guests from Argentina, Guatemala, Greece, India, Netherlands and Spain. More than 500 people were involved in 18 lectures and 7 workshops that happened from 9:00 p.m. to 10:00 p.m. - besides meetings with Brazilian government departments and a national meeting of Joomla User Groups (JUGs).

What happens when a group of enthusiastic volunteers meets a big university that supports open code, a national Open Source Association, and a Ministry of the Brazilian Government? The biggest JoomlaDay Brasil in history!

The premise: the main aim of JoomlaDay Brasil 2015 was not just to make an event, but rather use it as a way to strengthen the Joomla! Project and the community in the country with the following objectives:

Another premise of # JDBR15 was to make it available to everyone, and so for the first time in the history of JoomlaDays in Brazil, all activities of the event were free. 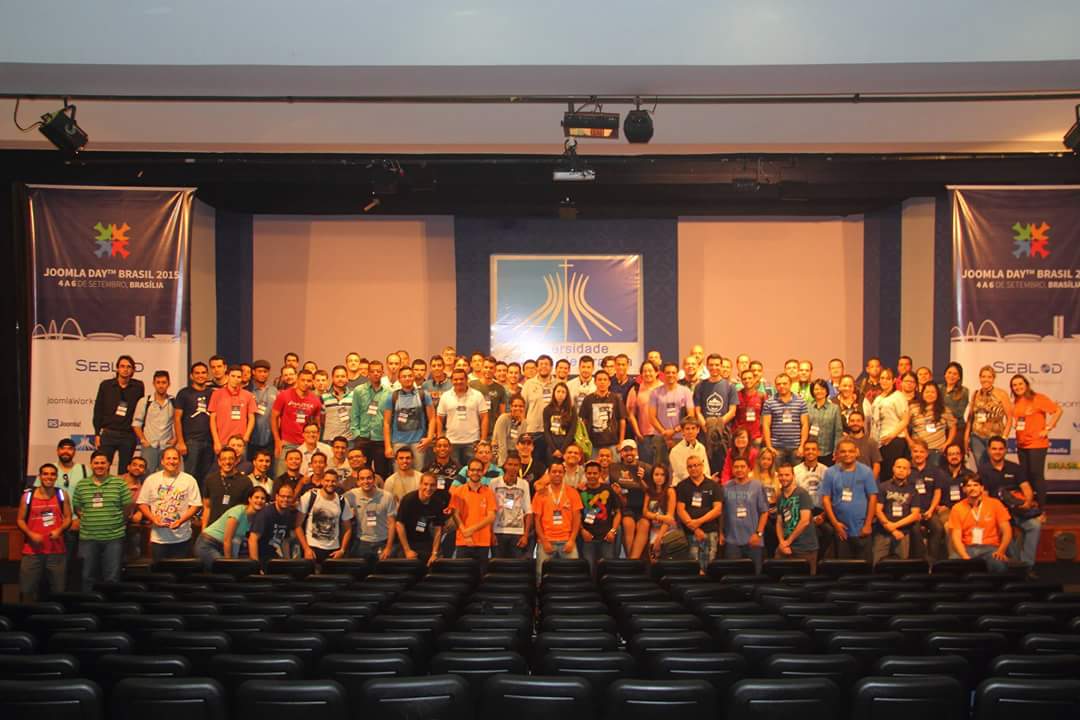 Official photo - attendees in the central auditorium on Saturday afternoon

Warming up the engines

The activities related to JoomlaDay Brasil 2015 began well before September. As part of the planning, we promoted local events and  participated in many other Open Source events as a "JDBR15 pre-event strategy". If you were following our previous articles in the JCM, you have seen all these activity reports. If not, you can check now ;) 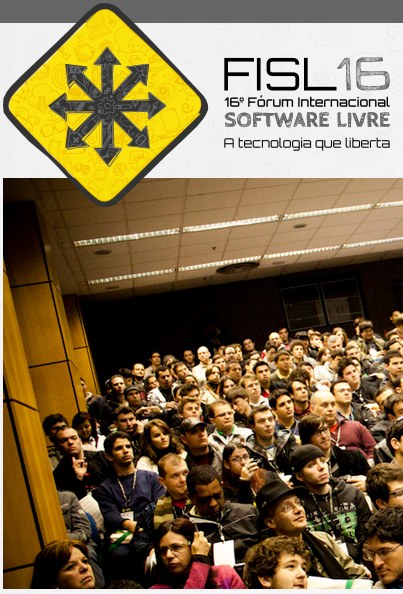 Our participation in the J and Beyond in Prague sponsored by the JET Programme was an awesome opportunity to show the international community what we were planning for JoomlaDay Brasil 2015 and get them involved. As a result of that, we had the largest number of international speakers and workshop instructors of any previous event in Brazil. This ensured an alignment of the JDBR15 with the direction of the Joomla Project, and helped attendees to understand the greatness of the Project. As an outcome, rich knowledge was shared by some people who directly make Joomla! happen, in addition to value the audience and motivate them. Thank you, JAB and JET!

On September 3rd, the auditorium of the Ministry of Planning hosted the event "Efficiency and effectiveness in the use of CMS to develop government solutions", which had broadcast live streaming and is now available here. 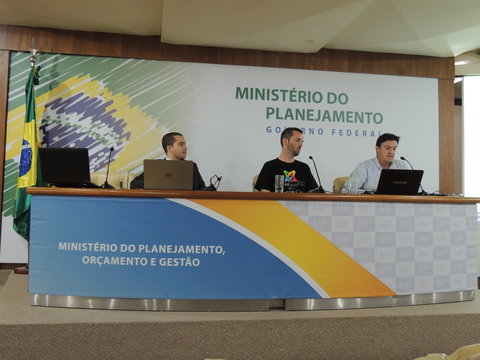 On the same day, Jorge Lopez-Bachiller and Paulo Ries attended a meeting about government use of Joomla! in the National Front of Mayors (FNP).

The support of the Catholic University of Brasilia (UCB) contributed to an impeccable infrastructure for JoomlaDay Brasil 2015. The event had two auditoriums, three laboratories, five classrooms and two more rooms to support lecturers and staff. UCB also did broadcast live streaming on its Youtube channel and provided equipment and volunteers to support the event. 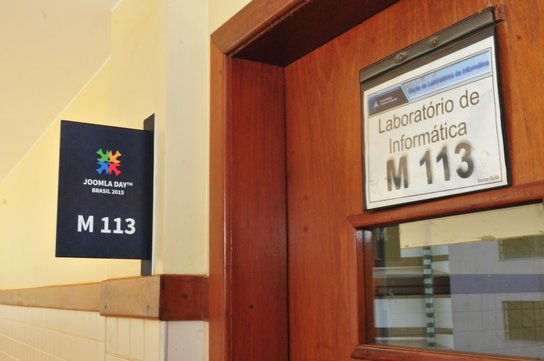 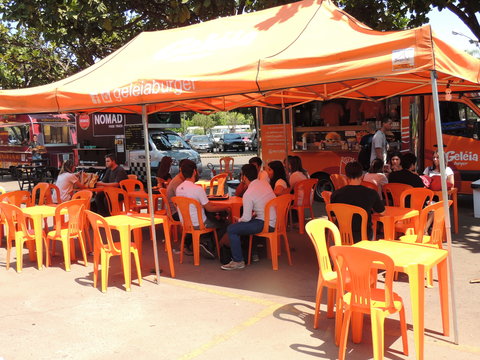 First of all, we asked Brazilian users to fill a form on the JDBR15 website saying which topics they would like to see covered at the event.

The second step was to build the activities in a collaborative way: all interested people could submit their lectures and workshops, which were later selected by a JDBR15 organization. Result: speakers came from various regions of the country to share their most diverse knowledge and rich experiences.

The lectures and workshops were held in the mornings, afternoon and evening, from 9:00 a.m. to 10:00 p.m. We had different blocks of activities - from basic to an advanced level of knowledge - occurring at the same time to reach the expectations of everyone, despite of the level of previous knowledge.

All lectures JoomlaDay Brazil 2015 are available at the Catholic University of Brasilia Virtual channel on YouTube. 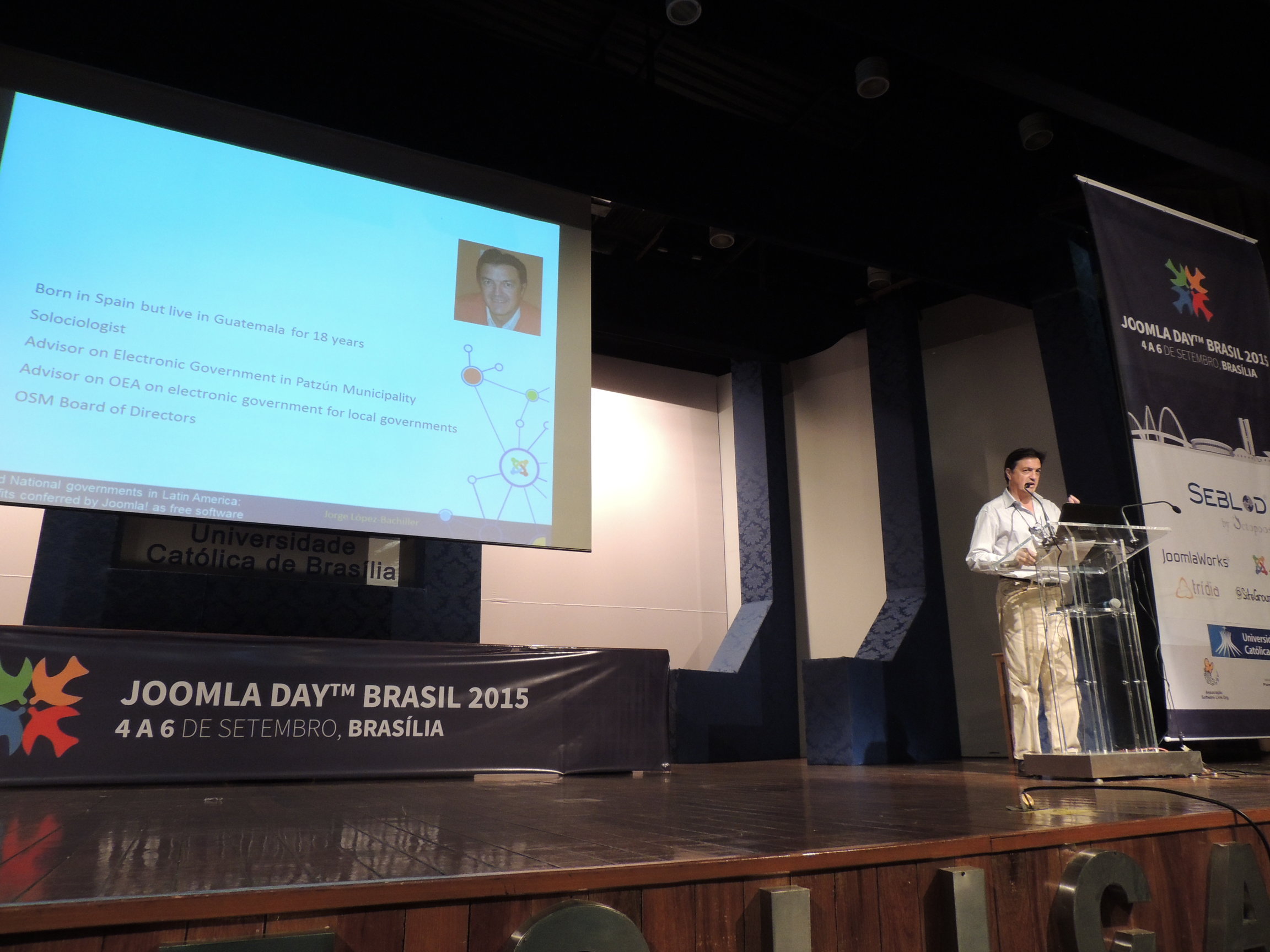 Thanks to JoomlaDay Brazil 2015 speakers:

It was available to attendees, free of charge, with equipment for simultaneous translation so everyone could have a better understanding of the content of the international talks. 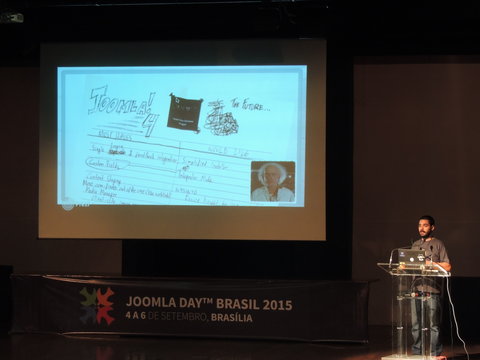 Javier Gomez, PLT, talking about the future of Joomla! 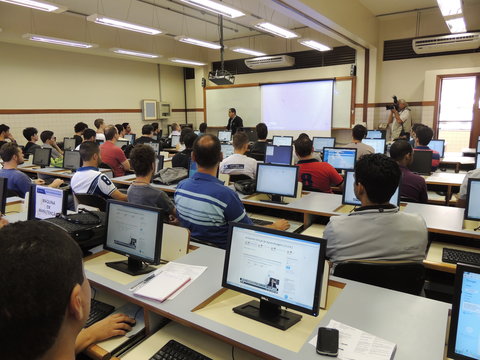 During the Bug Squash Session, coordinated by Roland Dalmulder and Javier Gomez, the participant group identified and resolved a bug fix that is ​​already incorporated into the next Joomla! update. Big success!! :)

An activity introduced this year in JoomlaDay Brazil was the "Thematic Area", in which attendees could move freely during 3 hours. Representatives of JUGs and active volunteers of the Brazilian community accepted the challenge of coordinating the thematic areas, defining and leading the activities. 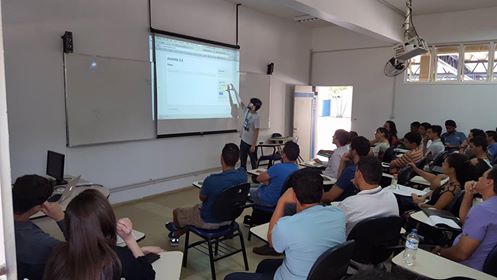 Rodrigo Spillere leading one of the thematic areas

Check out what was treated in each room:

Sound the trumpets for the first J! Awards Brazil! Rafael Berlanda, Quickstart Virtuemart and the Standard Federal Government Portal were the big winners by popular vote. The Joomla! Project was also honored in J! Awards Brazil. 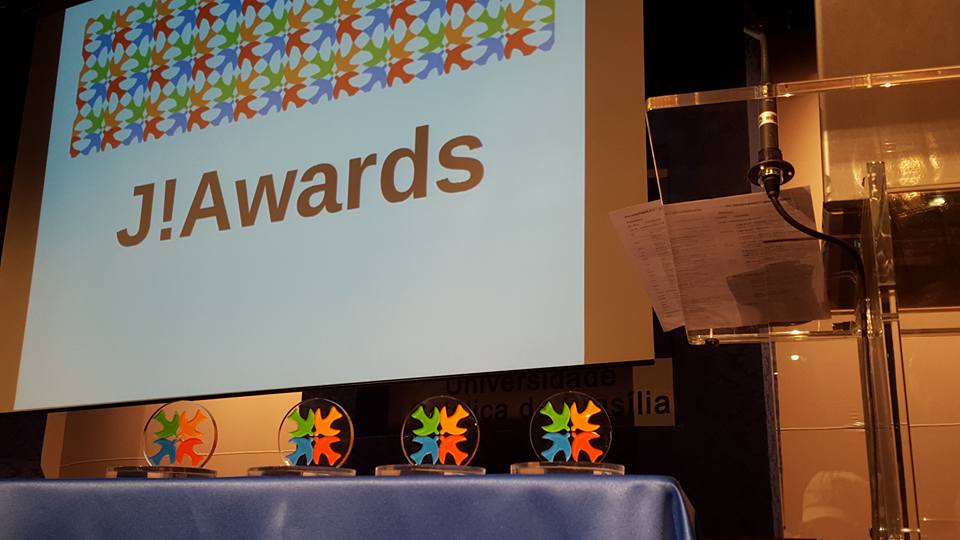 To end the second day of JoomlaDay Brazil 2015, all the organizers, speakers and volunteers took the stage and sang "Happy Birthday" to our beloved CMS along with the audience. Then everyone ate the delicious Joomla! cake (made by my awesome Mom!!). Congratulations to everyone who makes Joomla happen! 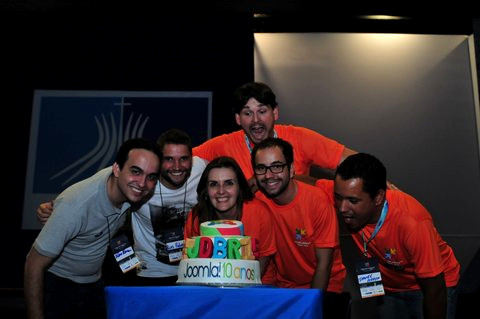 The fun continued at JoomlaDay Brasil 2015 with the J! Party which took place at the Ferreira Bar on Saturday night, with live Brazilian pop songs. 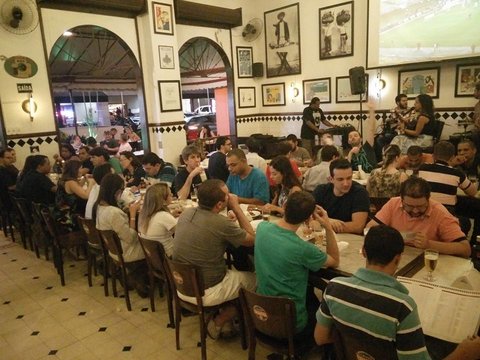 On Sunday, we had barbecue time in the City Park, full of good food, drinks and outdoor fun with friends. 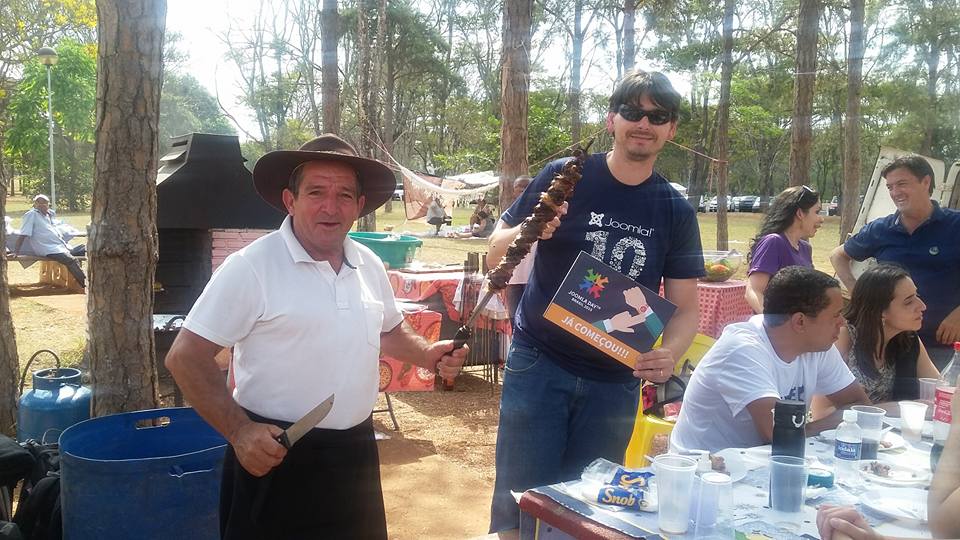 Despite the party the night before, JUG members and guests were standing in the National Brazilian JUGs meeting, which happened on Sunday morning at the Comfort Inn Hotel in Taguatinga. Hardworking people! :) 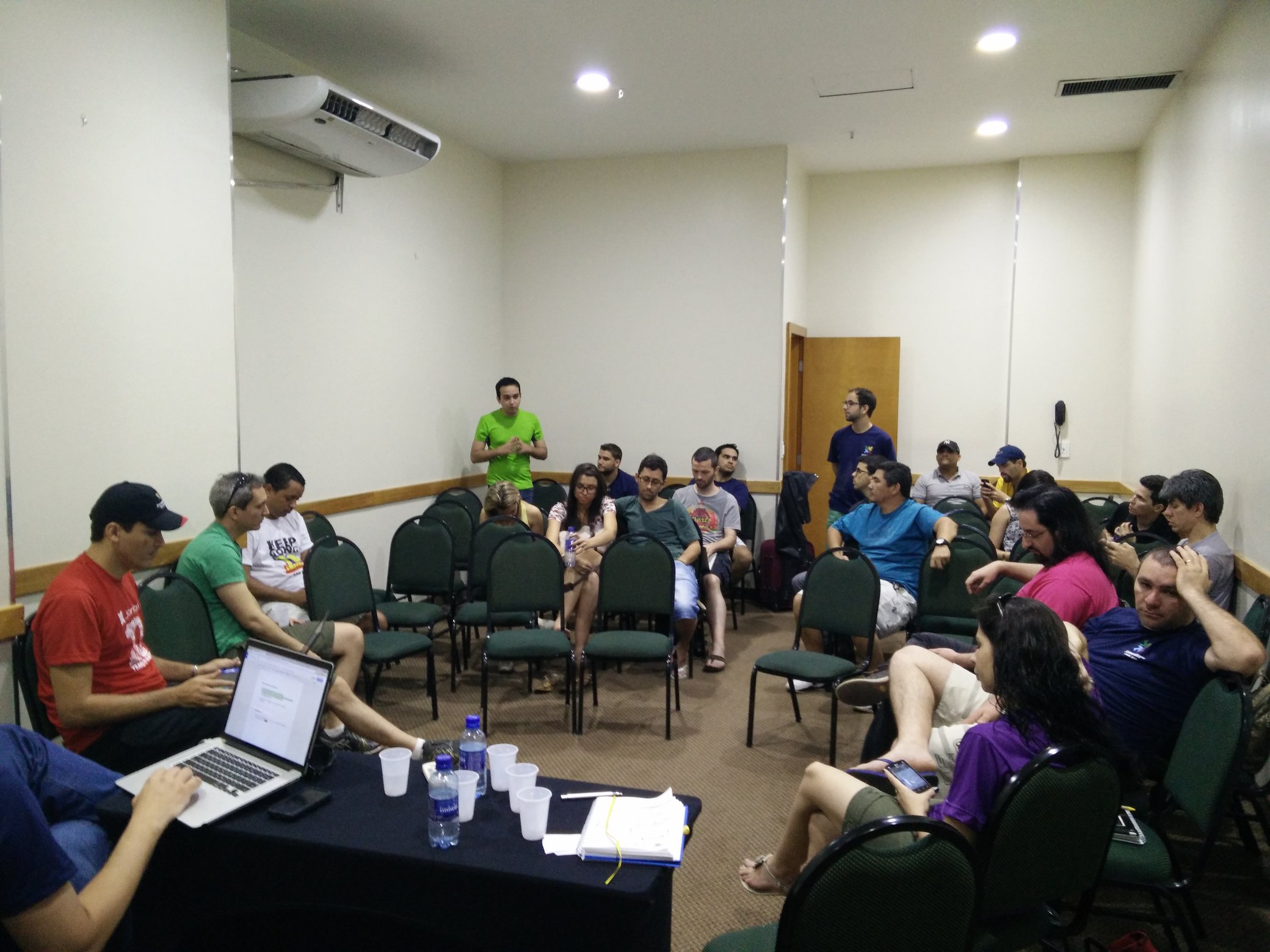 The project created by the wives of some joomleiros was also present in JoomlaDay Brasil 2015. They made their own schedule, which included an afternoon at the SPA. They deserve ;) 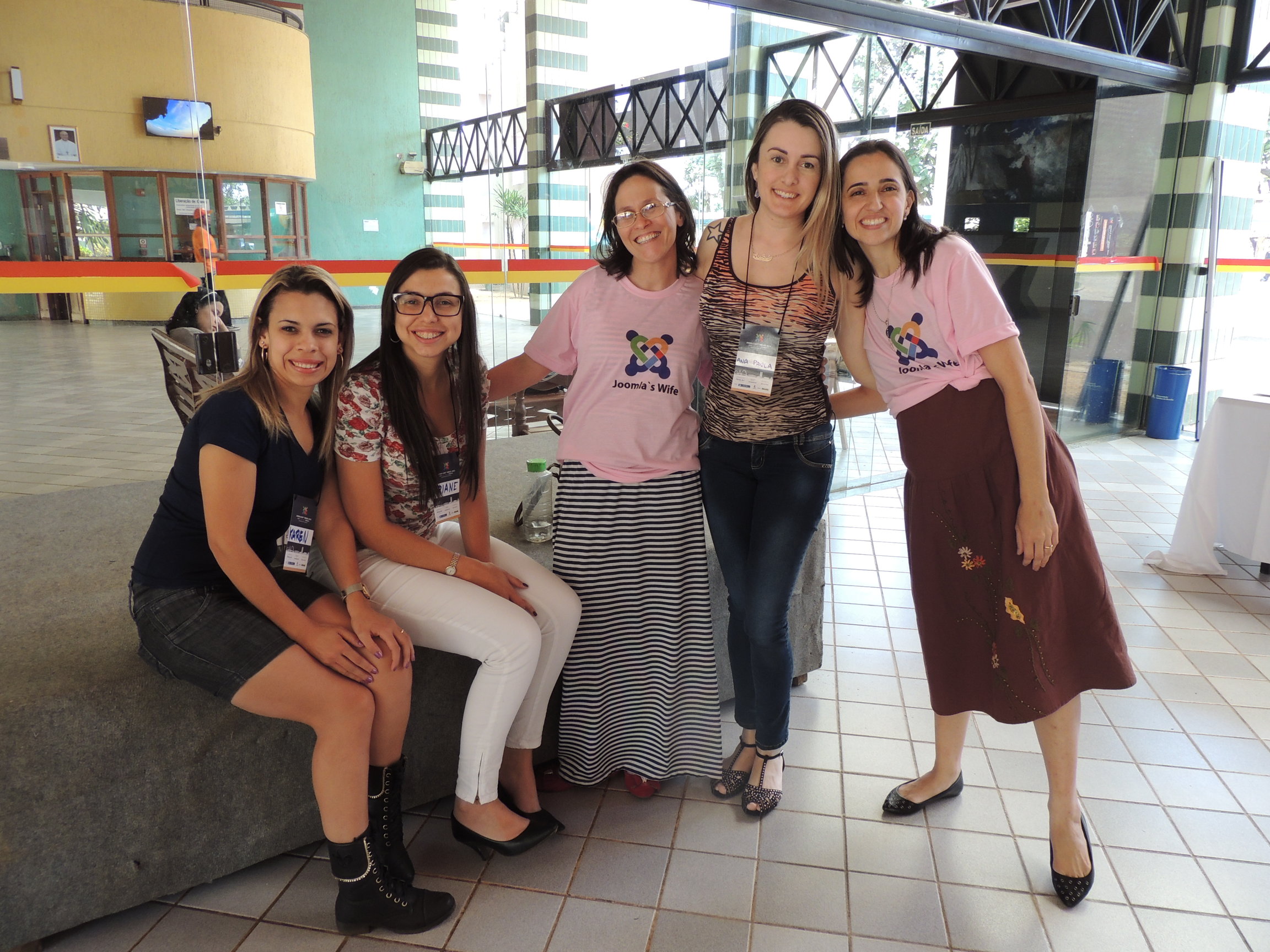 We could not have made it without the support of companies that believed in this crazy idea. With you ... our sponsors! Clapping for them and our many thanks!

The JoomlaDay Brasil 2015 organizers would also like to thank: all the sponsors who believed in our event; the Catholic University of Brasilia, host dedicated and great partner; ASL.org; SLTI/Ministry of Planning; OSM, PLT and CLT; all the speakers and Thematic Area's leaders; the suppliers; the Brasília Food Trucks; all attendees from many cities and states in the country and the people who watched the event in broadcast; our families - who not only understood our absence in many moments but also supported and participated with us; our co-workers (bosses, colleagues, subordinates) - idem; and the Joomla! Project. #alltogether #JPositive #joomlarocks

See you at the next JoomlaDay Brasil!