On the 1st of September five years ago Joomla! was unveiled to the world for the first time. It is time now for world wide celebrations in the Joomla! community, one of the most diverse communities in the Open Source world. With the least entry barriers, here anyone can take leadership and make change happen. It is a marvelous community of users, developers, designers, documentation creators, bug reporters and fixers, evangelists and every single person in-between who has touched and been touched by this software.

Joomla! has come a long long way in five years. Today it feeds many mouths, and no doubt the jobs it has created can compete with any of the top Fortune 500 companies in the world. It runs close to 2.5% of the sites on the web today. It is used by organizations as large as Apple, McDonald’s and the United Nations, and by millions of people for their companies, hobbies and charities.

Today as we look back, we are hit with a wave of nostalgia... so we will tell you our Joomla! story.

My partner Ashwin and I first got introduced to Mambo while working on a community 'Eco Portal' that we built and maintained for a non-profit organization. It was built on a CMS called as PHP Nuke. I remember those times when we worked with dial-up connections (believe it or not with speeds as low as 28kbps!), and creating anything was horribly slow.

After PHP Nuke, where installing any extension required modifying many files, Mambo was a breath of fresh air. We were amazed! What? You can simply point the browser to a zip file and install something as complex as a forum system? Were we hooked after that! We ended up migrating the NGO project entirely to Joomla!... although I must admit it took us way too long back then. 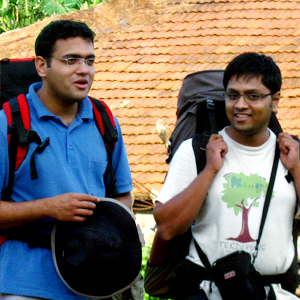 Initially we were overwhelmed with the administrator menus, but soon got the hang of it. Both of us were studying for a degree in Mechanical Engineering and simultaneously running a small business designing and developing some basic HTML sites with a little PHP. Joomla!/Mambo came like the wind and swept us off our feet. It was like getting super human powers! Now we could suddenly look at creating large scale portals with ease.

Our company could now look at greater horizons. We soon started looking into creating Joomla! templates and then modules. Plugins and components took more time, mainly because we could find almost anything that our clients needed already built for Joomla! Over time, requests from clients pushed us to delve deeper into the code and start developing our own extensions and modifying existing ones.

When the Joomla!/Mambo split came we followed developments closely. We were concerned because we had a couple of client sites running on Mambo. But Joomla! quickly became the front runner. While Mambo was decent for its time, the development pace was nothing compared to the way Joomla! advanced. The best thing about Joomla! was that it was made by the community and for the community. A huge community of users, developers, and template designers formed around it and there's been no looking back!

When we formed our new company, Joomla! was always our main focus. Keeping this focus for over five years helped us get close to the code and the community, and it has been a most fulfilling experience. During this time we have worked with a variety of Open Source CMS's like Drupal and Wordpress, as well as some commercial ones. This exposure has helped us decide what fits well and when. But to date, we haven't had a single request that cannot be developed in Joomla! We are proud to say that we have developed everything from a simple ten page site to enterprise-level applications in Joomla! With Joomla! anything is possible...

We love working for the Joomla! community when possible, which brings the greatest satisfaction of all. Be it our short stint in the Joomla! Bug Squad or mentoring students for last year's Google Summer of Code, it's been a very enriching experience.

We have grown in size and experience over the years, and last year we launched our extension shop and training division specifically focused on Joomla! It has met with a great response from the community and we hope to continue receiving their confidence.

Thanks for reading our story and indulging us in our nostalgia. Do you have a Joomla! story to share? Go ahead! Joomla! is all about sharing!