Joomla! Day DC will be held on 16 October 2010 just one block outside the United States' capital city of Washington, DC. The event is being sponsored by the Northern Virginia Joomla! Users Group. We caught up with its President, Bruce Scherzinger, to learn about their plans.

This is the first Joomla!Day to be held in Washington, D.C. What has planning the event been like?

The idea of a Joomla! Day DC was something the NoVA JUG discussed in one of our early monthly meetings. Planning really picked up steam in May when we started checking into venues, mainly in DC, and making our intentions known on Joomla People. 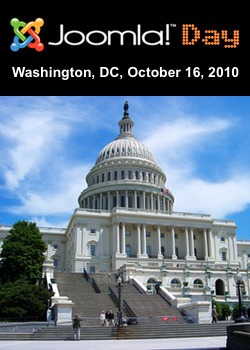 [Joomla! contributor] Microsoft's donation of the conference center of its Mid Atlantic District office in Washington was a godsend to our planning process. By nailing down our venue for us, they allowed our team to focus on bringing in the best speakers available. And boy, have we got some great ones.

Yes, we wanted to ask you about them—you do have many speakers, and three tracks of seminars. We know you can’t mention them all, but what are some of the highlights?

The list is pretty impressive. [Joomla! Development Coordinator and architect] Louis Landry, who as it turns out loves the D.C. area, was one of the first to commit to speaking. Our JUG’s very own Ryan Ozimek is Open Source Matter’s President and will give our keynote speech. I have great hopes of this event becoming one of the most attended Joomla! Days in this country. Even [Joomla! co-founder] Brian Teeman has made it known that he looks forward to "crossing the ocean and visiting Washington for this event." I'm really excited about the energy that is being generated over it.

No doubt it’s taken a lot of energy to plan. What have some of the challenges been?

I don't think we were aware of the complexities of holding an event like this. Thanks to the tireless efforts of our JUG secretary, Dorothy Firsching, we've incorporated the JUG as a non-profit organization, created a bank account, a set of bylaws, and done everything necessary to make us a legal entity. She's almost entirely to thank for getting all that done.

It was also quite a feat to drum up enough sponsorship to fund an event of this magnitude. This, I believe, has to be credited to our own JUG executive committee members' relationships within the Joomla! community and their knowledge of what's current, where Joomla! stands and where it's heading. Raising over $10,000 in order to keep the event low-cost for its participants and volunteer speakers was no easy task, but they did it with style!

Your group is only about a year old. Why did your new JUG take on the—no pun intended—monumental task of planning a three-track Joomla!Day in the American national capital? What are you hoping will come out of the event?

We are all quite aware of the strong market share that another open source content management system has in the Washington DC area. At the same time, it is pretty clear there is also strong interest in Joomla! This event should raise enthusiasm and create awareness in the Greater Washington area that Joomla! is a force to reckon with and a formidable CMS solution. We also hope to gain some additional membership for our JUG from this heightened awareness.

Last question for you, Bruce. If our readers have stayed with us this long, they probably want to know how they can attend.

Visit our beautiful Joomla! website at JoomlaDayDC.com and buy a ticket online. All the details about the topics, our fourteen speakers, and venue information are available there. But do it soon: the space is very limited. We’re expecting to sell out and October 16th is approaching quickly.