As he serves his country, Michael Babker finds time to serve the Joomla! project. In January 2010 he downloaded his first copy of 1.5, and hasn't looked back. He jumped into the forums and started tracking bugs. His contribution to 1.6 code is significant, and his fellow devs highly value his team work. On September 21st, the Joomla! community got a chance to show their appreciation...

Please share a little bit about yourself, where you live, and your life activities.

I am 23 years old and working in the U.S. Army as an IT specialist. Germany is my third duty station, and I chose it because I want to see Europe. Before coming here I was in Korea and Fort Gordon, Georgia. The Signal Corps is a part of the Army that has expanded over the years. At one time it was guys working on radios and other equipment, but as technology has evolved the Army has evolved with it. I've been with them for five years so far, and I really love what I do. My work is a help desk type job, troubleshooting problems for military personnel and contractors assigned to my unit. I work on software, satellite connections, and getting equipment ready to go out on assignments.

How did you get involved in the Joomla! project, and what is your role in it?

The whole web design thing started out as a hobby in high school. I started to learn HTML and CSS because I found them interesting. My first encounter with Joomla! came with the intranet we were using at Fort Gordon. It was a Joomla! 1.0 site and I was not impressed with it. I was hesitant about Joomla! until I saw what 1.5 could do. I didn't really start using it until earlier this year when I wanted to set up a site for a group that needed to manage their own content. Soon I was hanging out in the Joomla! forums, and began to answer questions based on common sense. All the hype about 1.6 caught my attention so I took a look at the Beta. I did a couple of reports on the bug tracker. Then some people suggested contributing patches and told me how I could set up and run an environment, so I did. I studied the code and got it to work the way I wanted it to. I think I have something like 200 reports on the bug tracker now, 160 patches I've created myself, and 160 that I've downloaded and tested.

Tell us what members of the Joomla! community did this week when they found out your computer was dying and it was hindering your ability to contribute code for Joomla! 1.6. 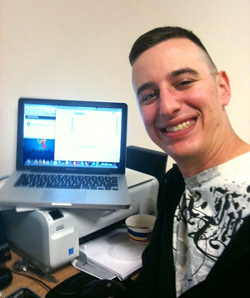 I had been talking with Amy Stephen and a couple of other people working on patches. After I tweeted that my old laptop was on its last leg, Amy spent time on Skype pleading with me to set up a PayPal account to take donations from the community for a new one. Without a portable laptop I would drop off the developer map for a year and a half when my unit gets deployed. Finally I agreed to set up the account, and between Amy's blog post and community tweets, the donations started pouring in. It only took 90 minutes to surpass the $1000 goal, at which time I removed the donation module. I want to say a big Thank You to everyone. I never expected to raise that much money that quickly. Something so nice happened from a whole group of people I've never even met before!

How does the Army compare to Joomla! as a community?

In the Army you move around a lot, and people come and go. It's hard to make lifelong friendships. One day they're here, and the next they're gone. It comes with the job.

Joomla! is international and you are constantly talking to each other. The community bond is stronger.

In your opinion, how is Joomla! 1.6 coming along?

The goal is to make 1.6 the best it can be. Everyone agrees on this. If we don't, 1.7 is six months behind, but we should get it right now instead of waiting. Since Beta 5 it's been harder to find people to test some of the tracker items. Maybe it's code burnout, or disappointment with how long this is taking. With any decision you make there is good and bad. The decision to release an updated beta every two weeks until the release candidate is ready encourages involvement, but there is a long list of priority 1 and priority 2 reports that need to be closed out, and they include some serious bugs. At the end of the day, the problems that exist have got to be fixed. Additionally, we need to focus on Joomla! 2.0. It's been on a 1 series for five years. It's time to move forward!

How would you sum up what Joomla! means to you in a few words?

As a software Joomla! has unlimited potential. As a community it is a great place to be, full of smart people with good ideas. It is great to see this kind of collaboration.

What are your plans for the future and do you expect Joomla! to be a part of it?

I really like what I'm doing in the military, and plan to keep at it as long as I can. Eventually I would like to become a Warrant Officer, which is a technical expert, and is a position that is not easy to attain.

Outside the military I'm taking classes online. I am a year out from my Associates degree, following which I'll roll on to my Bachelors. I am targeting an IT degree in web design. I see Joomla! staying in my plan as long as a good product continues to be released and the community supports it. As long as the project feels I have something to contribute, I will continue to give back.