There are many Joomla events to wrap-up 2014 including one of the year’s largest events, the Joomla! World Conference. Joomla! User Group (JUG) meetings and JoomlaDays are intended for everyone from casual users to core developers. The third annual Joomla! World Conference, also intended for all types of Joomla users, will be held November 7-9 in Cancun, Mexico. Visit the Joomla! Events site to browse all events, submit an event or learn how to organize an event.

The Joomla! World Conference returns for the third consecutive year, bringing together the worldwide Joomla Community for three days of learning, connecting, and sharing. Join us November 7-9 at the Grand Oasis Cancun, a resort in Cancun, Mexico as we bring the brightest Joomla minds together to share their experiences, connect with others, and learn more about Joomla and its community. Learn more.

The 7th annual JoomlaDay Italy will take place in Milan at the Milan Marriott Hotel. This is a free opportunity organized by the Italian Joomla Community to forge relationships and collaboration between Joomla users. Learn more.

Held in the Málaga region south of Spain, Joomla!Day Málaga is the first ever official Joomla event in the region of Andalusia. Event organizers aim to help the local community become more active, and, hopefully, create another great Joomla User Group. Learn more.

The second annual JoomlaDay Faso is an event organized to promote and popularize Joomla. One of the goals of this two day event in West Africa is to strengthen the Joomla user network in Burkina Faso by setting up the area’s first Joomla User Group. Learn more. 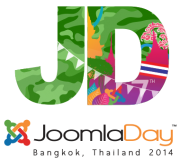 Whether you are a professional website editor, publisher, developer, or administrator, or if you are simply interested in learning more about Joomla, there will be something for you at JoomlaDay Bangkok. It’s a great way for people who are interested in Joomla to get together, learn from one another, find ways to contribute to the Joomla community and have fun. Learn more.

After several years of Joomla enthusiasts in Uganda traveling long distances to Kenya in order to share in a JoomlaDay, the decision was made to hold the first ever JoomlaDay Uganda. The first annual JoomlaDay Uganda is about celebrating Joomla and participating in great workshops and practicals. It’s also about networking for people who are in the business of website development. Learn more.

The first ever JoomlaDay, Dakar, Senegal will be held this December. The event was created by enthusiasts of Joomla and other new technologies. All are welcome to attend. Learn more.