Just a few weeks ago, our OSM president, Sarah Watz and Community Leader, Ruth Cheesley, came back from one incredible experience, the Grace Hopper Conference. The Joomla! booth was approached by many students and young women interested in learning more about our Community and Project. But what does it really mean for our brand to get involved in such a big conference? What is the real take-away for our Community?

During the 8th-10th of October 2014, the Grace Hopper Conference took place at the Phoenix Convention Center. Organized by the Anita Borg Institute since 1994, this event celebrates women in technology and today is the largest technical conference on the subject. 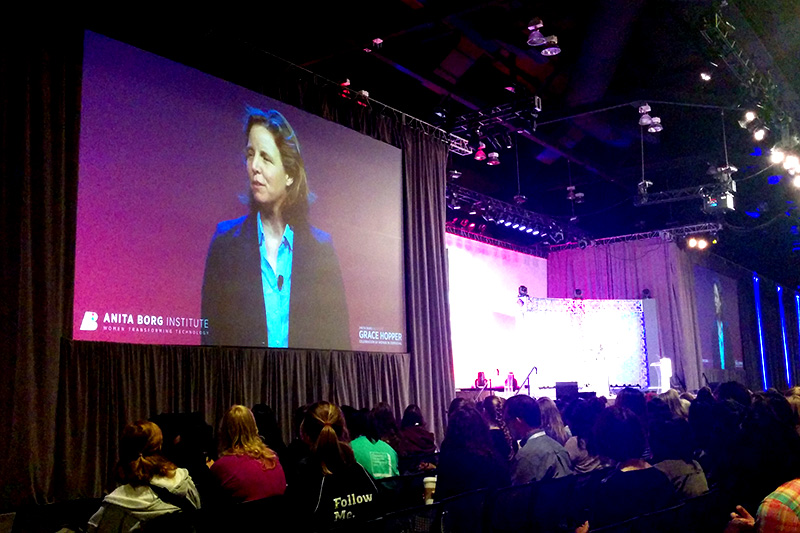 Tickets were only available for students, academics and sponsors. So the average age range was the early 20s. I remember myself at that age and how excited and, at the same time, scared I was about stepping outside my university corridors and looking for a place where my knowledge and my skills were useful. So I imagine there was the same electric atmosphere at the conference, where these young women were extremely excited to meet other people, hoping to find a way into the technological world! Most of them were probably aspiring to find the job of their dreams or a place where their presence would make a difference.

“I was surprised that so many attendees were so committed to visiting all the booths just to get to know the companies that were there. Most of the attendees were very goal-oriented and very much prepared to meet companies with their resume in hand and very outspoken about what they wanted,” Sarah said, “I thought they were very brave, and at the same time I was also curious about what contributing to Joomla could mean for them”.

With more than 8000 attendees, and among many big brands of the technology world, Joomla decided to participate with a completely new booth, a new message and a new style in order to welcome new contributors to our vibrant community.

Connecting billions, inspired by millions, designed by you.

Most of you have seen this slogan going around the web, tweeted by the Community and printed big on our brand new booth. As soon as Joomla was engaged and a blog post was sent out announcing our commitment as Silver Sponsors, the marketing machine started to work on how we would go there.

I compare this stage of the marketing process to the preparation it takes to go to a big dinner among VIPs: we talked about how Joomla should be dressed up, who was going to participate, what the tone of voice should be and what kind of results we wanted to achieve, but also what would happen next.

Our space was only 10x10 feet and my first questions were, “How can we be sure that they will notice us? What is the message we want to communicate?”

We all agree that Joomla is more than a CMS and the word “Community” may not mean so much until you explore it. We asked our big marketing group to help us find a great slogan, something that would not only say who we are, but mostly inspire and grab the audience’s attention and curiosity. Steven Pignataro’s sentence was the chosen one: “Connecting billions, inspired by millions, designed by you.” We are all extremely proud of Joomla: it is an award-winning CMS, best in the world, that has great features and you can conquer the internet with it. But we kind of felt that message, at a conference full of many other similar messages, wouldn’t be heard.

What we liked most about this sentence is that it embodies both the human aspect of Joomla (the Community) and the more technical aspect (the CMS).

“We also met some people who had already been using Joomla at school or in other projects,” Sarah added, “ Some of them had used Joomla 1.5 or 2.5 and got reignited when they learned more about Joomla 3. We also met those that had been active in JUGs or had even attended the Joomla World Conference.”

Among such a disparate audience, we think that the new slogan was a great pick: it motivates people who have never used Joomla before and continues to inspire people who have already used it. 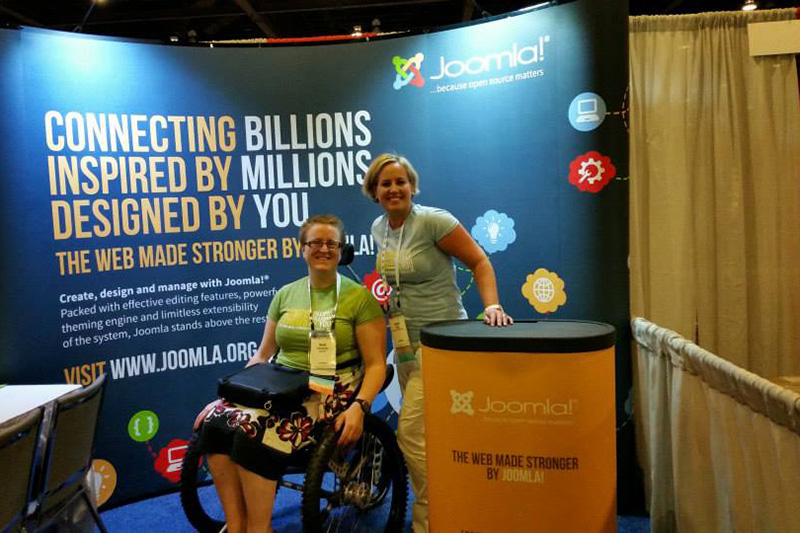 Once the sentence was found, we briefed our Design Team in order to create all the touch points that were going to be used during the event.

The Design Team is an interesting team within the Marketing Working Group that I’ve felt the need to form since I first joined the Community and that now I take part in. We do all the “pretty stuff” in Joomla, from print to web, adding meaning and stickiness to the message. We “recruit” designers and professional creatives that have knowledge not only of the web but also in graphic arts. The group works closely with the Marketing Working Group in order to contribute to making our message more consistent throughout all our media, outside and inside our Community.

Gavin Hookman, one of our talented designers, created the sparkling design for the booth. During the event, Sarah and Ruth also gave away some pretty t-shirts and flyers that Gavin helped us design. On the web, Gev Balyan helped us create the landing page that was used during the conference to recruit new contributors. We found that page so useful, that today it is the official “contribute page” were everyone can subscribe and join the Joomla Community.

“We had a huge amount of comments about the actual design of the stand - that it was visually appealing, eye catching and interesting,” Ruth said proudly.

After a month and a half of hard work, our team was ready and the great day arrived. As soon as they arrived at the conference center, both Sarah and Ruth were extremely impressed by the level of organization: “Everything was really slick, from registration to picking up bags, stage management to scheduling. Absolutely everything ran like clockwork, starting and finishing exactly on time.” Ruth said. “Also from a sponsor’s point of view, we got a lot of information before we arrived at the conference and during and after the conference.” Sarah added.

They spent most of their time at the stand, welcoming new contributors, curious about what Joomla could offer them. Due to the high volume of visitors, they had very little time to follow the sessions. “I liked the keynotes very much,” said Sarah, “ I also attended some sessions on the Open Source Day on how to get started with contributing to different types of software and communities. These sessions opened up a whole new world to a lot of the attendees that were very enthusiastic about starting to contribute to something larger than themselves. And when they came by the Joomla booth, a lot of the attendees already had knowledge on how Open Source works.”

Our leaders also ran a Students’ Opportunities workshop that was more like a round table discussion of up to ten people, who each spoke for 15 minutes at a time.: “It was pretty intense but enjoyable to be able to talk about Joomla and my journey to getting involved,” Ruth said, “But also presenting the opportunities that our community has for those who decide to contribute.”

We had 126 subscriptions during these three days. Some people have already been contacted by our mentors. They will help those new contributors, guiding them around the Joomla Project and building a great team of volunteers. We would love even more mentors to join in this mission as this on-boarding process is an important part of the success of our participation in the event.

This is the first time that Joomla was involved with its own booth in an event outside of the Joomla Community.

And as Sarah was telling me, this was a great investment, worth all the time it took, both on a personal and organization level: “Meeting the attendees face-to-face, discussing with the other sponsors and joining some of the sessions gave me great insights into how these kinds of events can be even better utilised for the Joomla project in the future.”

I was enthusiastic about our participation in the event since the first day Ruth introduced me to the idea. As Joomla Brand Manager, I felt it was an important opportunity (and challenge) to expose our brand in such a competitive environment and engage new volunteers in our Community in a different way, and and on a different level.

I am extremely happy and proud when our leaders “go out” and talk to other communities about our beliefs and projects. In fact, I look forward to seeing and sharing the experiences of Michael Babker and David Hurley at the PHP World Conference in few days (please check Mike Veeckmans’ interview of our two heroes!).

I think the rule of our Marketing Team must be to give our Community members the opportunity to be successful communicators and to provide those people with the tools that allow them to do so.

Hopefully the Grace Hopper Conference is the first of many other events we will be involved in, or to use Sarah’s words when I asked her if she was ready for a new adventure: “One of my goals as OSM president is to enable Joomla to be part of more non-Joomla events to get more attention outside our community. This event was really a great place to start”.

I would like to thank all the volunteers without whom this would not have been possible: Gavin Hookham, Gev Balyan, Jennifer Gress, Olaf Offick, Sarah Watz, Ruth Cheesley, Sander Potjer. And last, but not the least: thank you Mike Veeckmans for coordinating the team and making sure everything was organised and delivered on time.