Back in May 2020 when I was writing about the exciting new features of Joomla 4, Workflow had just been merged into the first Beta version that was released a week later. Since then there’s been various improvements made during the beta phase, and with Joomla 4’s release fast approaching, it’s time to look more closely at the new Joomla workflow features.

Even if you’re just a solo blogger, you’ll be able to use Workflow to improve your own creative process. Implementing a site for a small to a medium enterprise? Then you can use Workflow to create an editorial process to action steps in your publishing process. The game-changer? Large enterprises - corporates, NGOs, NFPs, government, agencies - can use Joomla 4’s Workflow to manage their content development sitewide. That covers some examples of where you might implement Workflow, but what other advantages can Workflow bring?

Implementing a publishing workflow on your website can streamline content production. If you’ve been producing content for your Joomla website for a while, you know that at times there’s steps that you always need to take in order to get to the finish line of having a published article.

You need to write the article and include some inline images. You’ll need to add an intro and featured image to display on the blog and article views. You might have custom fields for specific types of content, or some links to include to another article or websites. On the publishing tab, you can set scheduling and complete the metadata for SEO.

So for a solo blogger, in the past that’s all been part of the process you’re used to… and if you’re having an off day, you might miss some steps or skip some if you’re in a hurry. Setting up your own workflow to progress each step can help you prevent that.

That, on its own, is not a great example, so let’s expand it a little more with a few other scenarios.

Before we jump into the scenarios, there’s a few glossary items that you need to know for Workflow to make sense.

If you’ve used Joomla for a while, you’ll be familiar with the traditional status types: Published, Unpublished, Archived and Trashed.

Workflow changes how they’re used. It also impacts the Featured status for articles, which there’s an additional change to note for Joomla 4 (see below).

For Workflows to work, there’s two parts to the process: Stages and Transitions. A transition typically will: When you switch stages using transitions, once the article has been saved, the refreshed screen will show the new stage at the top of the workflow list, and the new list of available stages in the workflow dropdown on the Content tab.

This animation shows where you change the workflow stage by selecting the transition then saving the article to apply the transition.

You can find out more in the Joomla 4.x Workflow documentation.

Workflow from Idea to Publication

For my own blogs, I’ll be setting up a workflow in Joomla 4 that lets me work my way through the production of articles. Due to regular brainstorming, I’ve got a convenient list of article ideas, but up to now they’re in a Google doc, Trello list or Clickup.

So the plan for my workflow is to use the stages and transitions to process articles on their way through the blog production process. I’ll have stages that move through Idea, Rough Draft, Working Draft, Review and Ready to Publish. The workflow transitions will be set up to then switch between the stages as the article development moves along, eventually publishing and featuring the article.

That’s a personal example, which I’m sure I’ll refine over time, but gives you an idea of how you might set up a workflow. It’s when you bring in other factors like user groups and notifications that you can really start to see what Workflow can do.

The example included in the sample data is suitable for a small publishing team.

The stages move their way through various stages that a publishing team may have. The same team members might do multiple jobs, such as copy writing or graphic design, but then there might be a need to have the content approved by a client or management before they then either publish the article, or return it back to copywriters for further editing.

Install the sample data for Joomla 4 to see and test this sample Workflow. 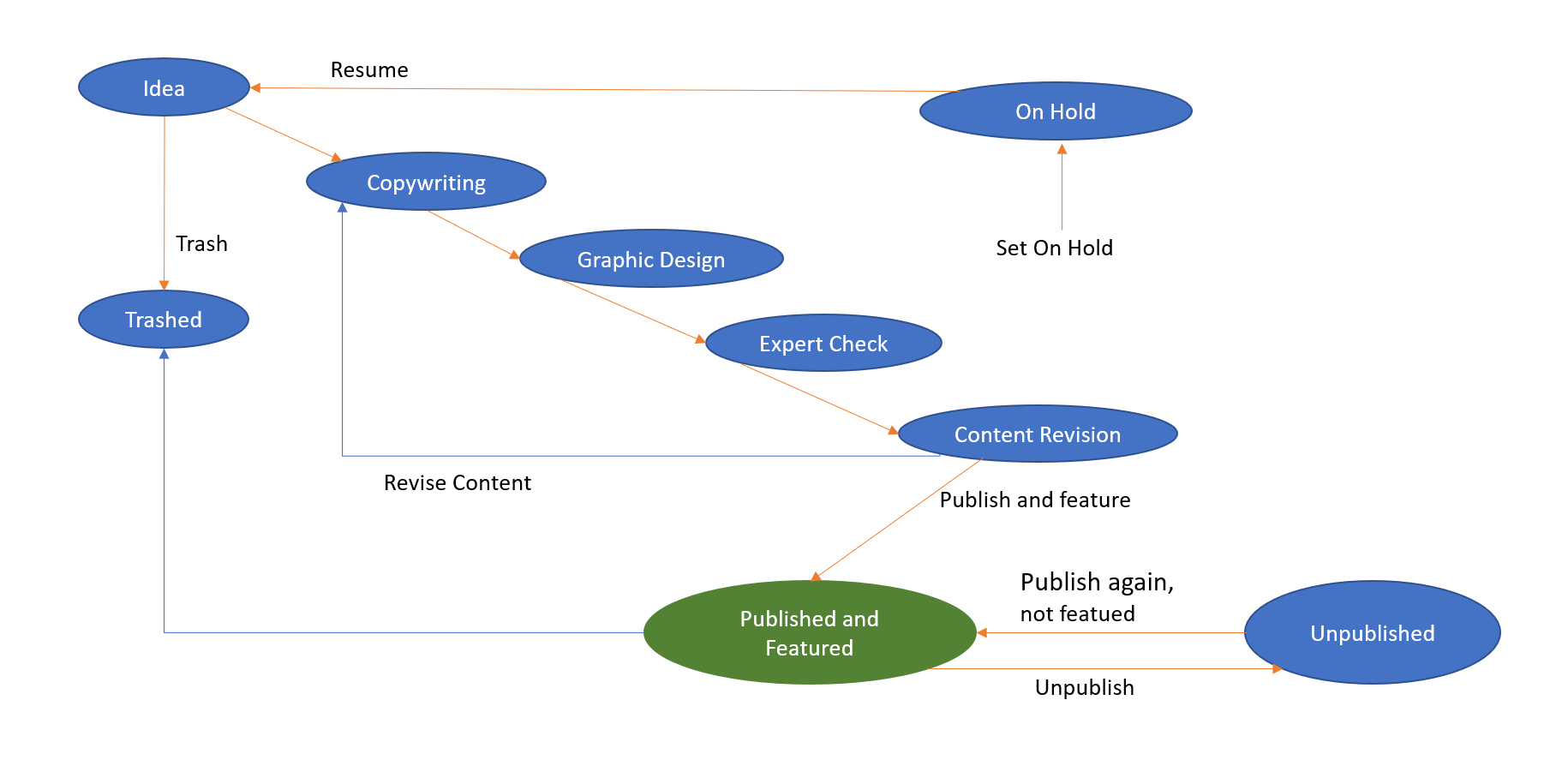 I’ve not tried the following example yet. It was complicated when it was first suggested to me 10 years ago, but I believe it’s also what the workflow component has been built to facilitate.

I mentioned in my May 2020 article that I’ve been using Joomla since the beginning. In that time, I’ve had some major projects that didn’t quite get over the line with particular workflow requirements. There had either not been an extension made to successfully do the job, or the clients requirements were just so unique that it was hard to come up with a workable solution.

This scenario’s all tied into the concept of User Generated Content, but on a multi layered scale. That particular scenario is for an organisation with 20,000 members in Australia, any of whom could have come up with content, and then would be submitting it to a team of editors across 7 different content areas, followed up by a publishing team of around 5 people.


There’s plenty of potential for ways to look at implementing the new Workflow feature.

As part of the component, there’s now a new plugin class for workflow plugins. These will allow a range of functionality to be considered going forward. My imagination’s been running wild, but I can foresee there might be potential to develop:

Marking an article as Featured has changed in Joomla 4. As you can set it as part of a workflow transition, the change is important to be aware of.

Before Joomla 4, Featured has been a simple toggle selection, also able to be actioned via the article list.

Two changes have been implemented in Joomla 4. The first applies whether or not you have workflow implemented on your site. Featured now can be set by having Start Featured and Finished Featured dates, which you can set on the Publishing tab for your article. This means that rather than having to manually come back and uncheck the Featured toggle at a later date, you can now set that date at the time you publish the article. For example, you might leave an article Featured for 3 months as your standard publishing policy, so when you write the article, you can set that date while you’re setting the publishing information for the article.

The second item related to Featured setting is that when you have Workflow on, you may need to design special transitions to allow you to toggle when the article is Featured, and another to turn it off. If you’re trialling Joomla 4, install the blog sample data, then turn on Workflow and you’ll then see a comprehensive sample workflow implemented that you can then further adjust.

At the time of writing, Workflow transitions override Featured Start and Featured Finished Dates, which should be something adjusted with other enhancements proposed for Joomla 4.1.

Build your own workflow

In this article on workflows on Submittable by Freedom Ahn, she suggests that working backwards from publication as your final goal can help you to identify crucial processes to put in your workflow.

Answer those questions in regards to how you want to implement your publishing process and you’ll end up with a comprehensive workflow in Joomla 4.

Many extension developers have written up guides on turning on Workflow which take you through more of the steps on activating workflow on your site in Joomla 4.