Standing in front of an audience of 167 (including an 11 day old baby) and not seeing a single empty seat when the event began was an awesome feeling. It was only then that I knew we had succeeded in rebooting JoomlaDay UK and proving that we have a large community.

When we first started to talk about JoomlaDay UK we had a few aims and targets. After a gap since the last JoomlaDay and several years since a big event we knew we had to reboot the event. We were confident that we could get 50 people and we hoped that we would get 100 but never did we imagine that there would be over 160. So many in fact that our venue would need to find some extra chairs not once but twice.

Planning the event took a ridiculously short time of just 77 days but as Microsoft were moving out of the building the following week it was Feb 13th or not at all. Having a venue provided completely free of charge makes a massive difference in planning an event as it takes a lot of the pressure off.

At the beginning we planned a single track event but as the number of attendees rose we were able to increase that to three tracks. We were fortunate that so many great speakers from across Europe had already planned to attend JoomlaDay UK so it wasn't a stretch to ask them to speak.

Running an event is expensive and we knew that to successfully reboot the event we had to offer tickets as low as possible. Regular tickets were just £25 and we had a special community sponsor ticket at £50 which enabled us to offer concessions to students, unemployed and pensioners. London is an expensive place and we wouldn’t have been able to offer tickets at this price if it hadn't been for Microsoft who generously provided the venue and the catering.

Even without these expenses, an event costs a lot of money and we needed additional sponsors. Many JoomlaDay set very high sponsorship rates that are exclusive - we chose to set very low rates to attract more sponsors. We had budgeted for a certain amount of sponsorship revenue and only added things to the event, such as the awesome event folders, as the sponsorship revenue came in. In the end we had twenty sponsors which was great as they not only provided the much needed money they also helped to promote the event. The more sponsors you have the more promotion and marketing that takes place.

Organising an event is hard and takes a lot of time. Some events choose to have a large team to spread the workload. We chose the opposite. Brian handled the speakers and sponsors and Rowan did everything else - which is a considerable amount. One advantage of there just being the two of us is that we were able to work without having to constantly have meetings to discuss things. We could just make a plan and then get on with it.

A JoomlaDay is not just about the sessions you attend but the people that you meet. In a busy one day event there isn't that much time for getting to know people so we had two social events for all the attendees (no exclusive speakers only events) - one the night before the event that was organised by JUG London and one after the event sponsored by Rochen in a very traditional pub, The Albert, that to my delight had several "hidden secrets".

It's all on film

As soon as the sponsorship money started to come in one of the first decisions made was to invite David Jardin over from Germany with the J&Beyond video equipment. David really knows what he is doing and before the final session was over he already had most of the sessions on youtube. Shipping the big box of equipment - and making sure it was properly insured - was quite expensive but definitely worth it. With three sessions on at any time making a choice didn't need to be hard as everything has been recorded.

A not so small problem

As the event rapidly approached we realised that we had a small problem. We had kept our costs so low, raised so much sponsorship and attracted so many attendees that we would have a large revenue surplus - what to do with it?

Supporting Joomla in the UK

We have put £2000 aside to help the Joomla User Groups (JUGs) in the UK offer the new Joomla Certification. There will be room hire and potentially expenses for someone to administer the exam. 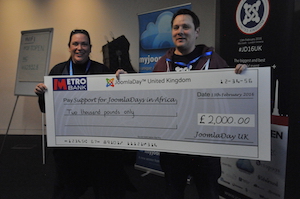 Not every JoomlaDay is in a position to raise enough sponsorship money as they are not attractive events to sponsors. But that doesn't mean that a JoomlaDay in Africa doesn't require money to operate so we have donated £2000 to OpenSourceMatters to be specifically used to help run Joomla community events in Africa. (This is additional funds on top of any funding that all JoomlaDay are able to claim from OSM and is not intended to be spent on international travel or accommodation.) 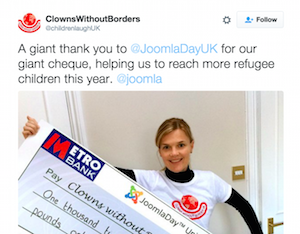 We have also made a donation of £1250 to http://clownswithoutborders.org.uk/ to help them in their work "to improve the quality of life for children and communities living in crisis." Everyone who as at JoomlaDay will I am sure agree that the work they do is something that as a community we should be honoured to support.

We are still finalising the accounts and they will be published on the web site. We expect that there will still be a surplus of over £1000 and this will be used as seed funding for JoomlaDay UK 2017.

An event like this is created not just by the organisers, the sponsors and speakers but by the attendees as well. To everyone of you who was there and took the few moments to say thank you - we really appreciate it.

As a co-founder of Joomla! and OpenSourceMatters Inc I've never been known to be lacking an opinion or being too afraid to express it.

Despite what some people might think I'm a shy and modest man who doesnt like to blow his own trumpet or boast about achievements.

You don't need a badge to polish to contribute to Joomla you just need to roll up your sleeves and do it.