On April 23 and 24, our ad hoc team* pulled off a JoomlaDay like no other, despite pandemic restrictions on travel and social gathering.

The event attracted 200+ registrations, and with 25 sessions in 4 simultaneous tracks, attendees are now returning to the https://jdayusa.com website to view sessions they could not fit in during the live event. (Head on over there and login if you are one of those attendees – all the videos are edited, and we fixed those that had transmission issues when live!) 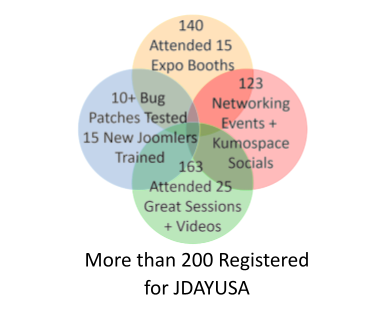 Overall, of the 200 who registered, 163 attended sessions, 140 attended expo booths (not all of which were staffed continuously), 123 attended networking sessions, nearly 25 attended some part of Bugs & Fun, and 15 attended the Intro to Joomla class. In addition, we held one social event for speakers, and another was open to all attendees.

“The biggest part for me was the Bugs & Fun. It was really well run, and Olivier was so helpful in explaining things. I never thought I could do this but it got me started.”

“The networking was a blast. I spent most of the time talking with a couple of people. I talked to people I never got the chance to meet before.”

“It was really well organized. Hats off to you guys. The Best Website presentation gave me a lot of good tips. Also, Tobias’ presentation on the path forward. But I didn’t do the networking – I am too introverted. I plan to go watch the videos.”

(The numbers show that some people managed to fit in more than ten networking meetups – wow.)

“I don't see much you could have done better, except if you had influence on internet quality and stability in all countries of all speakers around the world ;-)”

“Even though it was virtual, it didn't feel virtual. The software used was great for getting to meet people, chat for sessions worked well. Glad I will be getting recordings –"

“I liked the quality of the presenters and the international aspect of the event.”

“I especially liked the Expo feature and got to chat with people in the booths.”

How We Did It

It took a village, as they say. We had a very active team of about 6 or 7 people plus others, so about ten overall, about five months of planning and preparation, and a month of follow up. It took more work to create and run this as an online and interactive event rather than a typical in-person event:

But overall, it was a resounding success.

A huge shout-out of thanks to the team and all the speakers and presenters. We will do it again sometime.