The Portuguese islands of Madeira lie about 550 kilometres to the west of Morocco. We visit the tropical paradise to see why some of the world’s best hotels are attracting their guests with Joomla! websites.

We take an in-depth look here at how two websites were developed for world-renowned hotels on the Portuguese island of Madeira, where over a million tourists visit each year. The first site was built in 2010 with Joomla! 1.5, and the second site was developed using Joomla! 3 and launched just weeks ago.

The Quinta Jardins do Lago is a historic property which is now an elegant luxury hotel set in a lush botanical garden. It was built in the 18th century, and during Napoleonic wars General Beresford, Commander of the British forces on the island, chose it as his residence. It’s ranked as the #1 hotel (of at total of 93) in Madeira’s capital of Funchal, #2 in Portugal, and is also ranked #12 in Europe.

The Albatroz Beach & Yacht Club is a traditional Madeira island Quinta, with a private and stunning seafront stretching 400 metres. It is located on the eastern point of Santa Cruz bay and its pristine waters and sea-bed are amongst the most beautiful to be found in the Atlantic. The property is also a winner of the Tripadvisor Travelers' Choice award 2013.

Hotel 1 - Meeting the Challenge with Quinta Jardins do Lago

In 2010, Quinta Jardins do Lago was running an aged proprietary CMS. It was difficult for hotel management to keep the site updated, because that required the development company’s direct involvement. Worse, they were often slow to respond. Navega Bem Web Design conducted a a study and proposed a new site that the hotel could manage themselves, with the goal of increasing site traffic and the number of online reservations. 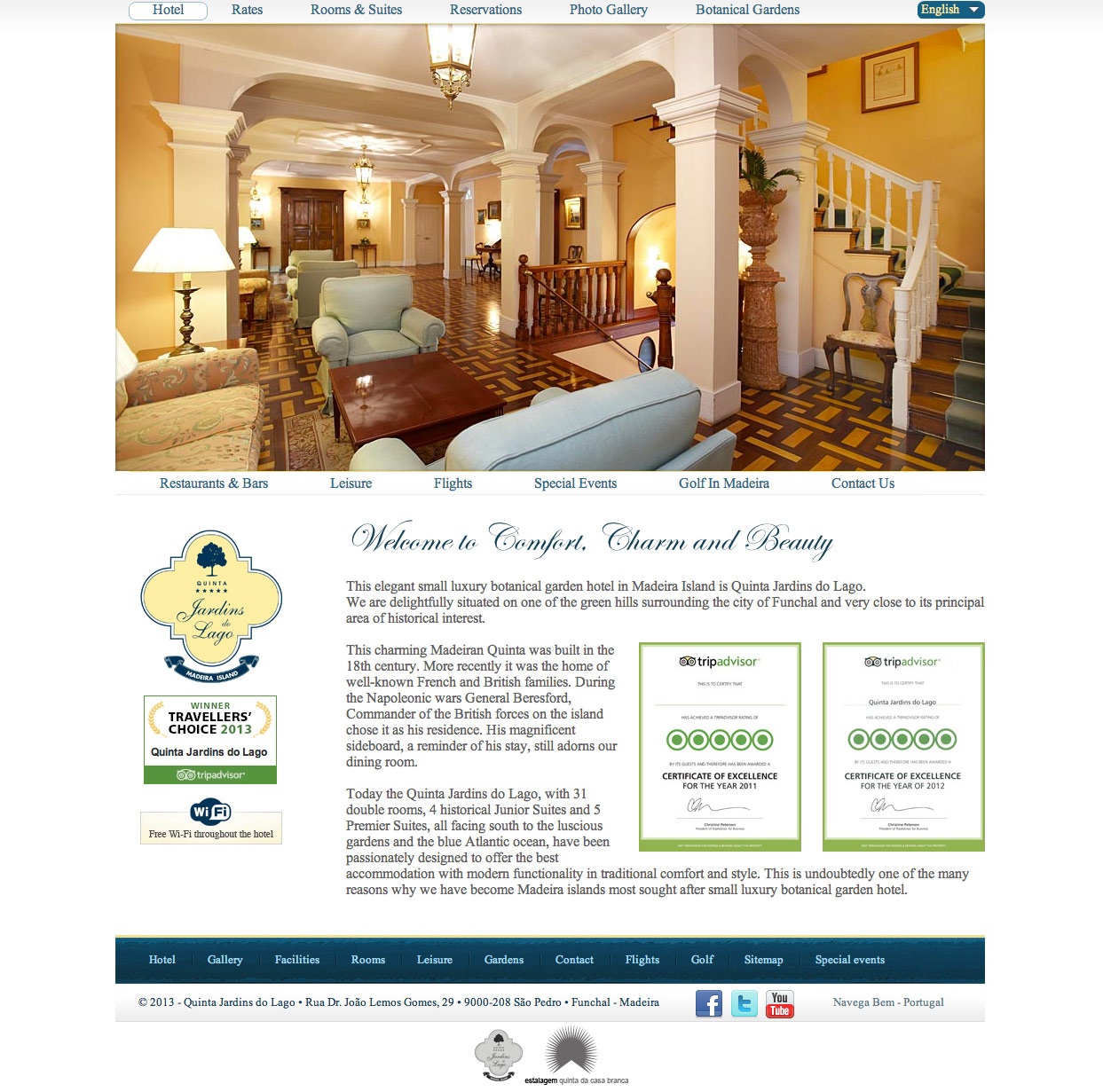 Navega Bem staff spent considerable time on the property, exploring the facilities and accommodations, in order to understand the luxury environment and get inspiration for the visual impact the site required. They also researched competitive websites in Madeira and internationally in an effort to identify the strengths and weaknesses of specific layouts and determine a concept for user friendliness.

Creating a multilingual hospitality website is not quite as simple as directly translating the dominant site language. The use of native speakers translators with an understanding of the hospitality industry was important, because flowing, well-written in a guest’s native language text allows them to feel more comfortable.

The most important visual aspect of a hotel website is the quality of the photography. Regardless of how attractive a site layout may be, if the images of rooms, facilities and foods are not of the highest quality, the site’s performance will suffer.

In 2010 Navega Bem did not have luxury of being able to create responsive websites, but their design concept was evolved to develop sites that also looked attractive on a tablet device such as the iPad.

The project was launched in 2010 with the support of the local press and media channels and has been a phenomenal success. According to management, the Joomla! 1.5 website soon began accounting for more than 30% of the hotel’s total bookings, and 2013 has been the best year so far in terms of hotel reservations and occupancy.

The Joomla! multilingual website works well, and the increase in bookings paid for the new site within just a couple of weeks after launch. A migration to Joomla! 3 and a new responsive design are now under discussion.

The Albatroz Beach & Yacht Club’s website was seven years old and running on a proprietary CMS which was difficult to update. Management wanted a solution that updated the hotel website’s visual impact, ease of use and responsiveness.

The main challenge was to integrate a booking engine and encourage guests to make reservations directly on the site, because this reduces the amount of commissions the hotel pays tour operators. 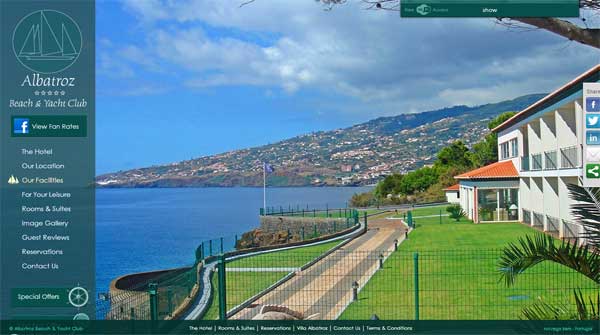 The Albatroz Beach & Yacht Club has a unique location on the island of Madeira and is a luxury five star property. The design concept was based on striking photography of the property, allowing visitors to immerse themselves in the views that would await them on arrival at the hotel. A responsive template structure was designed in such a way that site visitors could at any time hide text panels and enjoy the view.

The AvailPro Booking Engine was contracted to supply online reservation capability and a smart channel manager. The project provided an excellent opportunity to take advantage of the Falang multilingual component for Joomla! 3. The site was developed with English and Portuguese content and functionality, and more languages are being planned to follow.

Within 24 hours of launch, the first reservation came in and online bookings have been arriving so quickly that in just ten days, the site had fully paid for itself.

Says hotel director Gonçalo Lemos Nunes, “I find the software very easy to use and intuitive. The tools provided are more than enough to now allow us to update the site information ourselves. Our guests, and particularly our return guests, are very impressed with our new web site and happy to be able to leave a review or share ideas.”

“Time and time we’ve been approached by hotels that have been imprisoned in a proprietary CMS,” says Navega Bem’s Chris Szabo. “A number of booking engines provide web design services but then use their own proprietary CMS. Once a hotel decides that they need to replace particular booking engine or have to go in a new design direction to stay competitive, they soon realise they will lose their website. For hoteliers the smart option is Joomla!—it means they are not tied to any one design company, developer or to a proprietary, closed application.”