The 4th of July means many things to many people, especially in the USA, but for the Forum Post Assistant project it marked the 10th anniversary of the Forum Post Assistant utility being available on Github, having migrated from the old JoomlaCode SVN project some 3 years earlier. (Yup, you got it, the project has been around nearly as long as Joomla! itself!)

This was quite a milestone for the project team, especially for several of its current members having been involved since the very beginning.

As some of you may remember, the Forum Post Assistant (FPA) has come a long way since its early years. Nowadays, it’s a very comprehensive diagnostic and end user support utility widely used in the Joomla Forum as well as being forked by several 3rd-Party groups for use in their own forums to collect troubleshooting information and automatically build a preformatted post for the end user.

Originally, the simple idea was born out of the early days of the Security Forum. A number of the moderators and volunteers wanted to improve the end-users experience and overall impression of Joomla during a time that was potentially very frustrating and stressful for both parties.

At that time, being able to collect and post relevant, quality and accurate diagnostic information was a slow, laborious, error prone process with multiple posts describing how and what to do to answer an array of questions in order to discover potential problems. The plan was to simplify and automate troubleshooting to deliver a one-stop process to new and inexperienced end-users. This would reduce the stress, time to problem resolution and, just as importantly, allow new users to increase their own knowledge and experience whilst helping to reduce some of the "learning curve" involved in successfully running and maintaining a Joomla site.

The Forum Post Assistant, and its predecessors, is intentionally designed to be a stand-alone utility; simply upload one file and open it in a browser. Purposely not relying on the standard administration or installation processes, this allows the FPA to run and report against even the most troublesome or damaged environments or instances of Joomla! - in many cases successfully aiding in the complete recovery of what often looks or feels like a completely unrecoverable error.

Back in June 2020, the team embarked on a much needed "facelift" of the FPA bringing its graphical interface more in line with modern expectations as well as improving the workflow and diagnostic information available to new and experienced users alike. 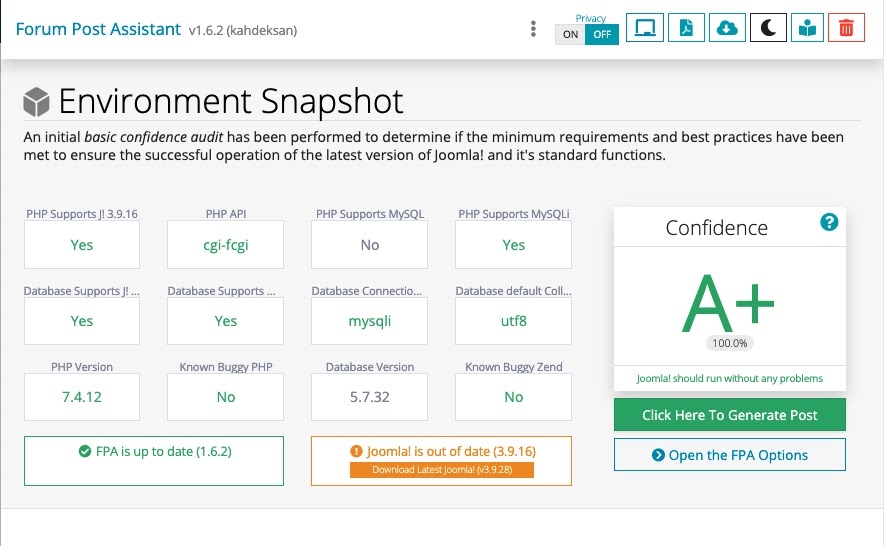 The Forum Post Assistant is actually the third generation of diagnostic and forum support tool by the same project team, having started life some 13 years previously as the relatively limited "Health, Installation and Security Audit" (HISA). 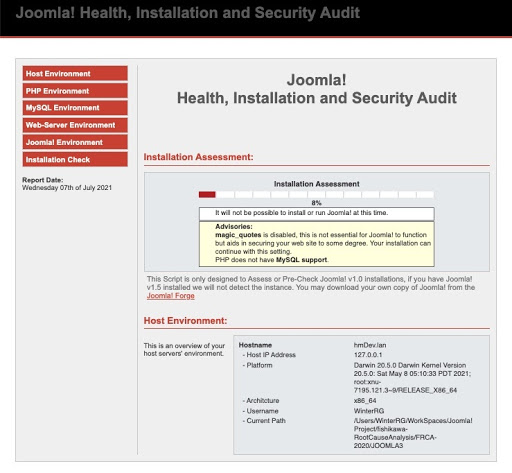 With the inevitable enhancements and changes that came in later years with Joomla! 1.5, HISA received a major update and was renamed to the "Joomla! Tools Suite" (JTS). With this update came many new features and functions, including the now well used “Preformatted Post Content” option, to aid in problem diagnosis and support a wider range of hosting environments and configurations.

"Imagine our surprise when the team recently tested both HISA & JTS on today's server and Joomla! environments and they still worked like a dream!"

The FPA Project team remains committed to improving, adapting and maintaining the Forum Post Assistant on Github and within the forum, with support for the forthcoming Joomla! 4 release and PHP8 compatibility well under way including the ever growing advancements in server and hosting environments.

On this 10 year anniversary, the FPA Team would also like to take the opportunity to thank all those community members and users that have supported the FPA by beta testing, bug reporting, feature suggestions and assisting new FPA users through the Forum when help may have been required.

Where To Find The FPA