With the recent launch of people.joomla.org the community has seen a shift in the way it communicates. The new site, branded as the J!People Portal, launched as a “beta” version on 12 May 2010 and was quietly introduced in a simple blog post. Now, after just over two weeks, the new community networking site boasts involvement of over 2500 community members. We decided to sit down with the two site administrators, Philippe Tassin and Sandra Warren, so we could find out the inside scoop and more!

I wanted to first of all say thanks to you both for your involvement and leadership on this arm of the project. I can only imagine the amount of volunteer hours and brain cells that go into a site like this. Throughout the last few weeks the J!People Portal has taken on a life of it’s own, and though it has had glitches and technical issues, it seems as if the community participants on the site are overwhelmingly happy.

What do you contribute the phenomenal acceptance of the site in the community and the growth of participation to?

Philippe: Most people that are active in the community are looking for a more personal relationship with their fellow Joomla! fans. The family of Joomla! sites has many things to offer, but not really a place to network or collaborate at the regular user level. A group is a great way to get people with the same interests together. It makes them feel they are part of a team with the power to impact the whole community through collaboration and discussion.

Sandra: This fabulous group of people from all over the world enjoy talking, collaborating and networking with each other. They requested more freedom to talk openly and candidly with one another to help improve this amazing platform. J!People answers that need and the growth confirms that.

The first 48 hours after launch was somewhat “disjointed” and seemed to be a “land grab” of sorts. Why or how was the decision made to launch without a more structured set of guidelines and group structure?

Philippe: Before the soft launch we didn’t know how the community was going to react but we knew the concept of groups wasn’t defined clearly. We were anxious to get the site rolling and learn how its users would interact before setting any kind of guidelines. Since the beginning the vision has been about allowing the community to somewhat manage itself by keeping rules to a minimum. We wanted to create the guidelines to meet the needs of the community and not anticipate the rules prior to understanding our unique community dynamics.  We did not think a blog post would result in that many members or groups created in such a small amount of time!

Sandra: It was near impossible to know how the members would use the community and how to adequately have everything in place right out of the gate. It seemed necessary to watch the way the users wanted the community to function. We created a simple set of categories and guidelines and monitored the forum feedback so we could create an organized plan that could be embraced by any J!People user within 48 hours. There were certainly other ways to accomplish this launch but I really feel I understand the community needs better having gone about it this way.

That is not how other parts of the project have been done in the past. What made the J!People team decide to go this route?

Philippe: The great thing about the Joomla! community is that each project is managed by different people and each team is more or less independent. This strategy just made sense to us.

One hot topic has been commercialization of the groups and user profiles. This seems to have been addressed with the inception of “Fan Clubs”. Care to explain what those actually are and why they even need a place in J!People? 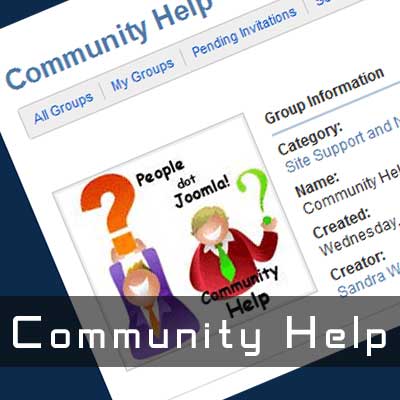 Philippe: There were many discussions on the subject. Do we allow promotion/advertising or not? How do we prevent spam and excessive self promotion? How do we support projects that are GPL and complying with the TM while allowing virtually any discussion on any project/company? Most importantly, how do we define all those concepts while keeping the guidelines clear, simple and easy to follow? Who “owns” a group and what does it mean to be the group creator and a group admin? It all became clear once we decided to focus on the discussions within groups that belong to the whole community.

Sandra: It has been important from the beginning for every face of  the community to be represented on J!People. The Fan Club Groups address the needs of those who have a company, or following that they wish to promote their services to or collaborate with. This solved many issues including self promotion and spam since the membership to groups is optional. Fan Club Groups provide the only area on J!People in which advertising, self promotion and marketing is allowed.

So, in essence, you could compare the Fan Clubs to “permission-based marketing” or “opt-in advertising”?

Sandra: Absolutely! The owners of these groups have full permission to market within their group to their members. The only requirement is GPL and Trademark compliance which will be enforced before the official launch.

Philippe: Fan Clubs are simply a way for us to support GPL and TM-compliant projects (commercial or non-commercial) by giving them a place to communicate with their fans.

Typically the word “Beta” means that no new features will be added. Is this the case for J!People or are their some new things coming down the pipeline?

Philippe: Even though the word Beta was used, we really are doing a soft launch. This phase is a way to test the community’s dynamics and adjust the tools to meet its needs. I hope there will be many features added shortly and we are working on them daily.

Sandra: There are many features and tools in the works. Look for many upgrades before the official launch.

Looking back at the preparation and launch of the site, what would you have done differently?

Philippe: Even though there are many things that could have been done differently, I don’t think over planning this site would have been a good idea. Now that the dynamics are in place, it is our job to adapt and adjust the site. The only thing that could have really been useful: more advanced moderation tools.

Sandra: I really don’t have anything that I would have done differently at this point. I may change my mind though :)

What advice do you have for other site developers who are considering launching a community networking site?

Philippe: Listen and adapt to the community, research and learn about community dynamics, choose the tools carefully, give the community a purpose and a sense of belonging, find community “leaders” who will keep it going.

Sandra: Organization is key at every step of this development. There are many many facets of the project and it is absolutely imperative to keep on track and organized for each and every phase.

Not to sound rude, but – the community has not seen either of you on other teams. How were each of you selected for your positions on the site?

Sandra: Much like many others in the community, I had asked to help with the project in any way that I could be of service. Later I was contacted by Wendy Robinson and told that there was a need for the new Social Site and the rest is history.

Philippe: It was time for me to give back to the community, so I was looking for projects to be involved in. After a few days I was contacted by the team about this new social site.

Care to tell us a little about yourselves?

Philippe: In short: married to a traveling wife, father of a 4 year old, professional skydiver, hot air balloon pilot, moving every couple of years, victim of adrenaline addiction. Originally an electrical engineer (MSEE), I switched to web development in 2005 when I discovered Mambo and Joomla. Owner of two online marketing and design companies in the US and France, I enjoy business and software development.

Sandra: I am married with 4 children ages 29, 27, 6 and 5. Our older girls married and left us with an empty nest so we started over again by adopting 2 more, one from The Republic of Marshall Islands and the other from Guatemala. We also now have 6 grandchildren and another due this year. Needless to say I multitask very well.

Sandra: We would love to hear your thoughts and suggestions for the project and it is very important to us to have transparency and open communication. This is the best group of like minded individuals making up the most amazing community on the planet! Submit your feedback at the people.joomla.org forum at http://forum.joomla.org/viewforum.php?f=576

Well I know both of you are very busy and want to thank you for taking the time out to candidly answer some of the questions we had. I would love the opportunity to have both of you back after the site has been out of beta for a few months to get some more feedback.

Sandra is the CEO of Joomla! Web Group by Magnolia; a custom design and development firm that focuses on the Joomla! CMS.

Philippe is the CEO of NewNectar Media; a design and development firm that focuses on the Joomla! CMS and Social Media and provides the popular JoomFB Extension.

A special thanks to them for taking time out of their busy schedules to spend a few minutes with us and our readers!