The International Translation Team members are a bit anonymous. They are all great contributors, but not really recognizable in the community. We want to change that! Let’s tell the Joomla Community who they are and share their experiences and expectations with the world!

Currently there are 42 teams listed at Joomla.org. We asked them to answer a survey which intended to give us a glimpse of who they are and what they're doing.

First question: when did you get involved with Joomla Translation?. Most everyone is contributing since the fiirst day Joomla was released. 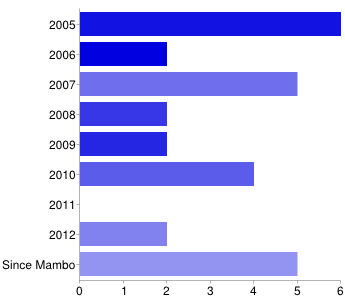 Then we asked: How did you get involved in Joomla Translation? A vast majority had other reasons to get involved, which made us curious. In a future survey we'll go deeper into that. Second reason to get involved was curiosity. That means that Joomla caught their attention at some point. Also, several were invited by members. This shows how each one of us can contribute to keep the project growing over time. 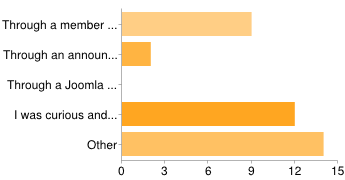 How many people are on your team? We found out most teams are small with no more than five people. 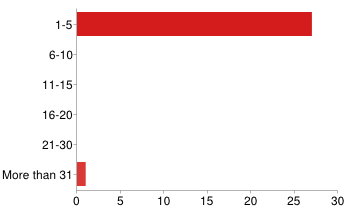 Are you an active member in your local Joomla community? We got 89% of YES to this question. Good to know people are involved! But, what about those 11%? What is preventing them from being more active?

Surprisingly, we find that when asked "Does your team provide localized Joomla distributions with sample data translated?", we get a lower percentage of YES. This demonstrates there hasn't been much interest in translating the sample data.

Whe asked "How long does it take to translate a Joomla initial version (1.5, 1.6, 3.0)?" we had different answers. Some teams finish their translation after ten hours of work, while others take up to three months. This reflects the fact of also translating the sample data, the number of people in the team, and their available time for the project.

Teams were also asked "What are the challenges your team faces when translating to your language?" Top challenges seem to be difficulty in translating technical terms and the number of characters used in different languages. For example, the space taken up by a common phrase such as  "Read More..." can be different, depending on the language. An issue that showed up and seemed relevant is that left-to-right languages have a harder time translating from English.

Then it was asked, "What improvements would you like to find in the current Joomla translation process?" Many teams are not happy with Transifex and would like to have a tool within Joomla or on the web that would make their work easier. Also, the number of times the same words, like YES and NO, are called by different strings is an issue, because they have to be translated several times in different places.

Most of the teams reported that they also are active 3rd-party extensions translators. When asked about any proposal for improving the current translation process for 3rd-party extensions, it seem that Transifex is the tool that is most used to accomplish this task. Another proposal is to have developers use more of the core resources, so there's no need to translate general words like YES and NO, for example. Also, there's been a request for developers to unify the way translatable text is made available.

Finally the teams have been asked to input any comments that they want to share. We got requests for a glossary for technical terms used in Joomla and have some FAQ's and articles to stimulate people to join the translator teams.

The Joomla Community Magazine and the Joomla Translation Team are listening to you all. Please, feel free to add your input through the comment forms below.