JoomlaDay Minnesota and the Hope for a Local Joomla! Community Imagine a large city with no active Joomla user group and only a handful of publicly visible Joomla users. How did its first JoomlaDay attract over 100 attendees? Will this ignite a new local community of Joomla enthusiasts?

Back in November at the Joomla! World Conference, Ryan Boog and Mike Demopoulos, each on his own, inquired about organizing a JoomlaDay in the Twin Cities of Minneapolis and St. Paul. Aside from their own staff and clients, Mike admits he knew only a handful of local Joomla users. Nevertheless, together the two committed in January to organizing a JoomlaDay. Six months later, registration for the July 19 event was shut down three weeks in advance as the numbers pushed the facility’s capacity. On the day of the event, 115 signed in at the Minneapolis venue.

The beginners track drew the largest portion of attendees. Topics spanned the Joomla workflow, launching a site, and making any design work on a Joomla site. The idea was that this track would be appropriate for new or casual users and for those who are considering Joomla.

The business & marketing track, also well attended, covered topics of interest to the business-minded and decision makers: entrepreneurial thinking, security, Joomla statistics, and Joomla licensing. Even the developers track averaged around 20. Its varied topics generally assumed attendees engage Joomla at the code level. Interestingly, there was no track dedicated to the seasoned Joomla users who do not code, but the mix of topics across the three tracks seemed to satisfy. 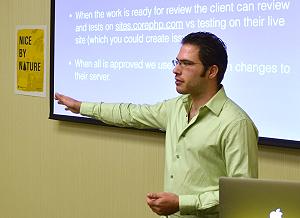 OSM vice President Rod Martin opened the day with his State of Joomla – a positive and promising message. Luke Summerfield led the lunch hour with a presentation about marketing and the psychology of web visitors. Victor Drover closed the day with an appeal for open source projects and a challenge to attendees to get involved within the Joomla project.

Event promoter Demopoulos reported that many companies sent two representatives, one attending the business track and the other the beginners track. One such example was the Minnesota Orchestra, which has been using its responsive Joomla site for two years. Web developer Henry Grant is new to its team and to Joomla, so he bounced between the beginners and developers tracks while his co-worker was interested in the business & marketing track. Grant came with goals: to discover how others use Joomla, to learn best practices, to pick up resources, and to make valuable connections. He now intends to attend the newly forming JUG.

Another attendee, Andrzej Zalansinski, has been engaged with this CMS since the Mambo days. Having grown a Joomla shop for his employer, he has recently launched a consulting service. He was surprised to learn of a JoomlaDay in his own city, and immediately knew he would be there. His goals in attending were to expand his business network as well as learn how to implement Joomla solutions more efficiently, so he mixed between the business and developers tracks. Like Grant, Zalansinski sees value in a user group and hopes it runs monthly. 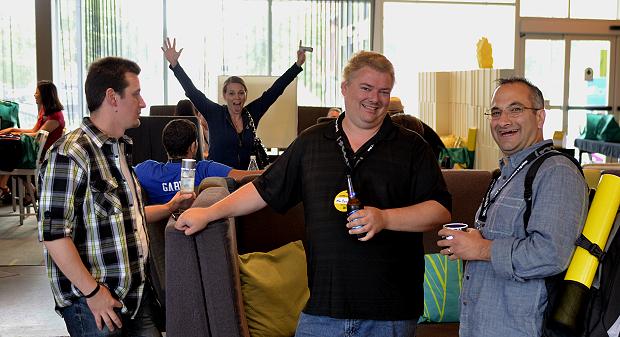 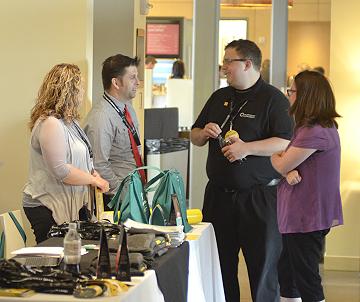 Planning and selection of the downtown venue started six months earlier. Tracks and an agenda materialized. As is standard, the call for speakers was open to anyone, but the promoters pro-actively invited well-known presenters, and the line-up was announced two months in advance. Roughly two-thirds of the twenty speakers were from out-of-town and experienced presenters within the Joomla circuit.

Potential sponsors were contacted early and pro-actively. Invitations were sent beyond the traditional Joomla supporters. As a result, the over 30 sponsors included not only well-known Joomla companies but also companies that provide complimentary services such as Mandrill and local SEO/marketing providers.

Last April Steve Burge, organizer for the highly successful JoomlaDay Atlanta, published his approach and experiences with that event. The Minnesota organizers took notice. For example, Steve emphasized "take care of sponsors." In Minnesota, before and after every keynote and announcement segment, event MC Duke Speer would acknowledge two or three sponsors, explain the value of each, and encouraged attendees to visit their booth. Other actions stemmed from his advice, such as the creation of a beginners track and being pro-active in targeting and inviting prominent speakers.

(Likewise, in the spirit of Steve’s sharing, hopefully the ideas shared here will inspire and suggest ideas to other organizers of Joomla events.)

With sponsorship supporting the event, the next task was promotion. Social media and online directories received a lot of attention. In particular, a sizable amount was spent on paid ads and placement in Facebook, LinkedIn, Stumbled Upon, etc. Sponsors provided increased visibility through their social media and mailing lists. And one must not underestimate the relevance of personally inviting local clients and prospects.

All this promotion led to over 100 attendees in a city with no active user group.

The one-day event is over and the out-of-town speakers have gone home. Now that we have found dozens of other local Joomla users, the next task is to nurture the new connections into a self-sustaining, self-organizing community. 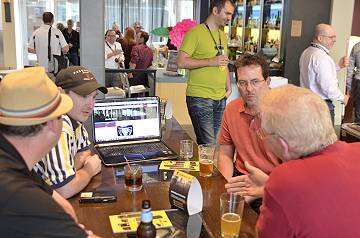 Tessa Kriesl had registered a local Joomla User Group nearly three years ago, but it never established active participation and regularly scheduled meetings. Now, with renewed hope and enthusiasm, and with the JoomlaDay organizers holding an email list of 240, Tessa has scheduled a JUG meeting for October 1.

The goal of this first meeting is to reunite the local community and encourage individuals to take ownership for a year of JUG meetings. Will we be able to find enough volunteers to help arrange topics, speakers, announcements, and a location? Is the local enthusiasm deep enough to sustain active participation throughout the year?

Pierre Balian recently moved to the area to take a Joomla position with a local ad agency. While living in Milwaukee he periodically attended its local Joomla user group. Being a seasoned Joomla user, he values a JUG for the opportunity to network and connect with peers. He says he would definitely attend JUG meetings here. How many more new and seasoned Joomla users are out there that we have yet to discover?

A search of social media produces a list of over 900 local professionals who list Joomla somewhere within their profile. That is a sizable number of Joomla users we don't know and who don't know us. Image the potential of the young start-up community if those forming it will identify those unknown to us, contact them, and personally invited them to connect with the community. The potential is there. Will local leaders emerge to invest the time and effort needed?

These implications apply not just to Minnesota. Perhaps they reflect the potential of growing a Joomla community anywhere –even if those reading this know only a handful of other Joomla users.

The JoomlaDay organizers have already booked next year’s event to be held at The Mall of America, a mega mall that draws more traffic (40 million per year) than any other mall in the world. The Great Room and Event Center at this iconic venue raises the capacity for next year’s JoomlaDay to 500. Where might all those people come from? How much of next year’s success will rely upon the growth of the local Joomla community – a community that hopes to emerge from this year’s JoomlaDay?