How the Alpha’s will work

As soon as you go to install Joomla 4 Alpha you’ll find bugs. That’s OK! Right now we’re just getting some first rounds of feedback on the work we’re doing. We encourage you to report any major bugs you find in the codebase to the issue tracker. This includes things like:

In terms of the UX. Please don’t submit issues about the backend interface yet (because we are working on a major redraft as you can see in Elisa’s article in the JCM this month) or any mobile issues, but please feel free to comment on the frontend and especially about the new installer experience!

If you do find a bug and want to submit a report, please check first the nightly builds - these are rebuilt from the latest version of the code at 1am GMT everyday and are always published at https://developer.joomla.org/nightly-builds.html - to see if we’ve already fixed your issue.

In terms of how these are going to work in the future - we’ll be releasing alpha’s roughly once a month - although we may make occasional alpha releases outside of that if we merge any major features.

What is Joomla 4 going to offer you?

I’m going to overview a few of what I consider some of the key features of Joomla 4!

We have all known that Joomla’s Media Manager has been one of the poorest user experiences of the entire Joomla system. We’ve reworked this from the ground up with the help of our awesome New Media Manager Team. This now has a clean fluid interface. We’ve also moved this to be a Vue.js application, so that means no page refreshes with the clunky iframe as in 3.x. 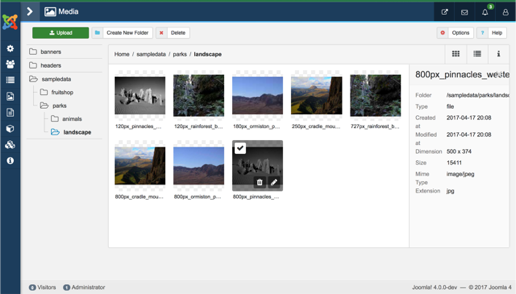 You can store your files outside of the Joomla filesystem with the new architecture - just install a plugin for your use case!

For our installer we have taken some inspiration from Wordpress and their infamous 5 minute installer. Our installer has been simplified of many options that can be set after the user has completed installation, and turned into a single page javascript application: 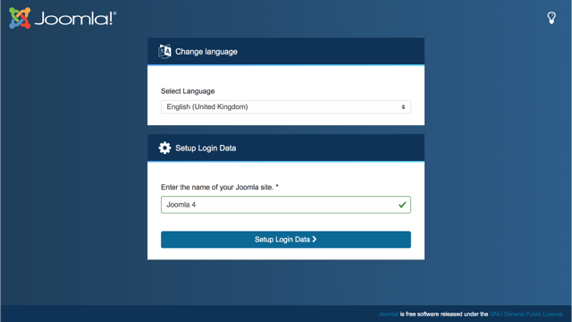 Currently there are nearly 1000 deprecated classes and functions in Joomla 3.8 (omitting our framework packages). It’s also been more than 5 years since Joomla 3.0 was released. To avoid a Joomla 1.5 style migration in the future due to the amount of deprecated code becoming overwhelming it’s important to have a clean up now where we can give progressive upgrade paths to extensions rather than forcing them to jump. This will also make things easier for people using our docs as there should be new clear standards for how to build extensions rather than competing things based on new and legacy approaches.

OK, so I’m cheating slightly by calling this feature a 4.0 feature. Actually we loved it so much we put it into Joomla 3.9 to make your upgrade experience as simple as possible. You can see in an instant the compatibility of your existing 3.x install with the version you will upgrade to - useful when trying to look at which of your extensions are using Joomla 4 already! 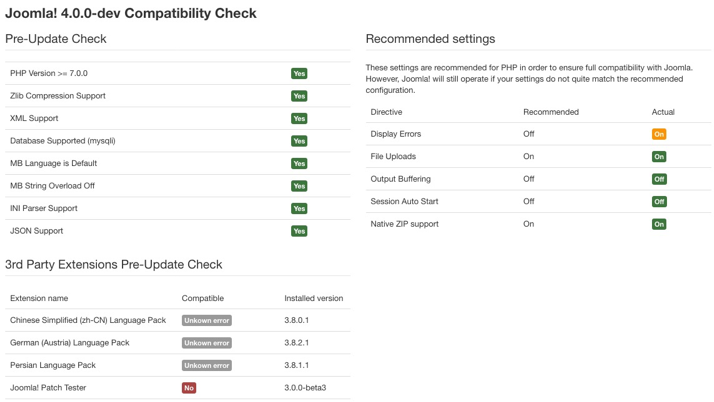 What we are working on

There’s still loads of work to do on Media Manager. Milestone 2 goals were outlined in the last team meeting and include enhancing the action plugins, restyling the media form field, adding file downloads and moving/copying files.

We had 2 students from this years GSOC work hard on a web services concept for Joomla. Before their project even started we had envisaged what the very first MVP for Joomla would look like, making some tough decisions along the way to ensure that it would be viable. This minimum specification can be found at https://joomla-projects.github.io/gsoc17_webservices/. Whilst there is still a huge amount of work still to do to meet our initial target - we want to keep the good progress up and get a first drop into Joomla 4.

See Elisa’s awesome proposal in this months JCM and the work the accessibility team are doing to ensure that our CMS becomes compliant with Level AA of WCAG 2.0

One of the most interesting things of recent times is the introduction of service workers which is nearing completion as a W3C standard. In contrast to the idea of apps, you can ‘save’ a page to your mobile and cache the html, css and javascript with a service worker. Then when you go to load the page you can then access it even when offline. It goes without saying that to implement this in any CMS (especially ones that have some sort of login system) is a huge amount of work. But it’s something we’re very keen to start innovating on. A group of people got together at JWC to start thinking about how this could be implemented in Joomla and we’d love to see more like minded enthusiasts to help out with this project!