Happy As a Joomler, On a Beautiful Trip... It all started with this email: Congratulations! we are pleased to inform you that you have been selected to participate in the Joomla Event Travel Program (JET) and attend the Joomla World Conference (JWC14) in Cancun from November 7 to 9, 2014! Needless to say, my joy was great because I was going to meet people with whom I am friends and share on forums, chats, hangouts etc... I would also get to see people I met at the last conference in Boston, Massachusetts JWC 2013. In short, I could not hide my joy to have been selected to go to Mexico to meet people just as passionate as I am about Joomla.

Cancun was chosen to meet the huge community of Joomlers Latin America. Four other people from the French Joomla users association would also be part of the trip (Valérie Itzaken, Adien Baborier, Nicolas Claverie, and Eric Lamy). All of this to take place at the idyllic Grand Oasis Cancun: white sandy beaches, coconut palm trees, drinks and meals within easy reach, cigars from Cuba, the sense of welcome and the Mexican fiesta, with a broad sense of rhythm. I dreamed of Cancun and made everyone around me crazy – it had become my obsession. Take a look at the scenery, and you will understand why. 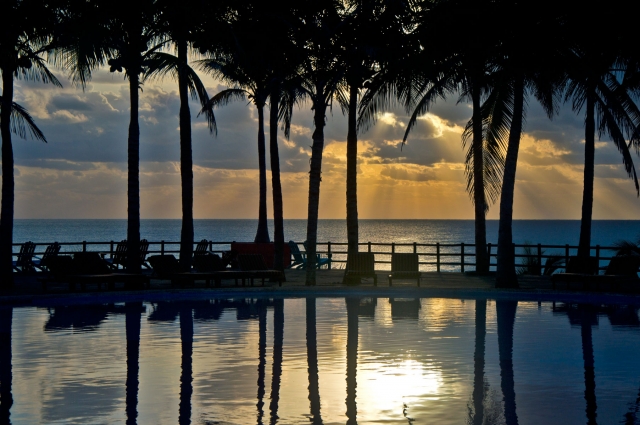 I left my home town of Tarbes on 11.04.2014 (Hautes-Pyrénées) with an inconvenient train strike... I finally got to Merignac Airport (33) where the plane was waiting for me the next day at 07:00, to take me to Paris Charles de Gaulle Airport.

The Air France-Paris / Cancun flight was on time. A journey of 11 hours is long for me. Time to watch some good French movies, take notes, and watch the progress of the flight on screen. I met up with Nicolas Claverie (Hikashop), Adrien Baborier (AcyMailing) and Brian Teeman (Co founder Joomla) in the aisles of the aircraft. We chatted a little bit about everything and nothing. The flight went well, we landed in Cancun early in the evening on 5/11. The passage through customs and the baggage claim was fast. Exiting the airport, the humid air surrounded me.

No smoking for 11 hours, for a smoker is a record! First cigarette shared with Brian Teeman outside Terminal 3 waiting for the "cancun shuttle" (shuttle from the airport to the hotel). Jennifer Gress who came from San Francisco (California), who was also selected by JET (Joomla Event Travel) was to join us. We had organized the shuttle by email a few days before leaving with Jennifer and Brian ... and ... Jennifer did not show up. We managed to reach her after 30 minutes, she was waiting for us at Terminal 2. Once found, we departed for the hotel.

The hotel is owned by a wealthy Mexican investor. I had thought that it was American. It is very spacious, and made me feel like I was in Alice in Wonderland. All nationalities together, in a huge pyramidal structure. I headed to the reception to take care of the formalities, and was led into an air-conditioned room. The view of Cancun by night is beautiful, and I found myself dreaming about what was waiting for me during these five enchanted days. 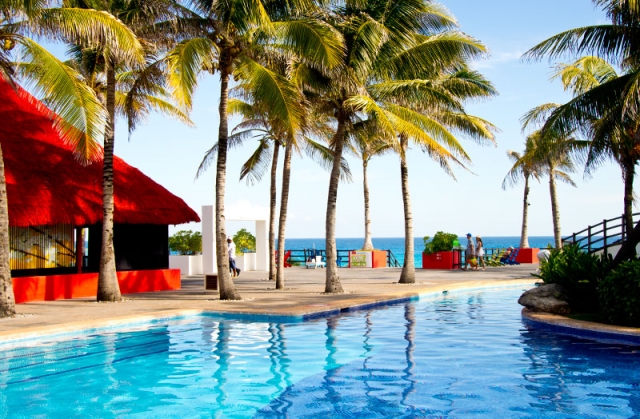 I had the feeling of being a little lost in this hotel. I wanted to find some Joomlers, feeling a little "alone in the world." After an hour of walking, having traveled the beach and endless corridors, I finally found Guillermo Bravo (Chile) and his friends. I thought, finally, people who have similar interests as I. We shared the first meal in Mexico at an Italian restaurant (lol) and went to the hotel's nightclub for a last drink. The day was very long, so I left shortly after, because of the time difference and a lot of hours of sleep to recover. I learned the next day that some went to the beach to admire the moon.

Having slept little, watching the superb sunrise made me very happy. 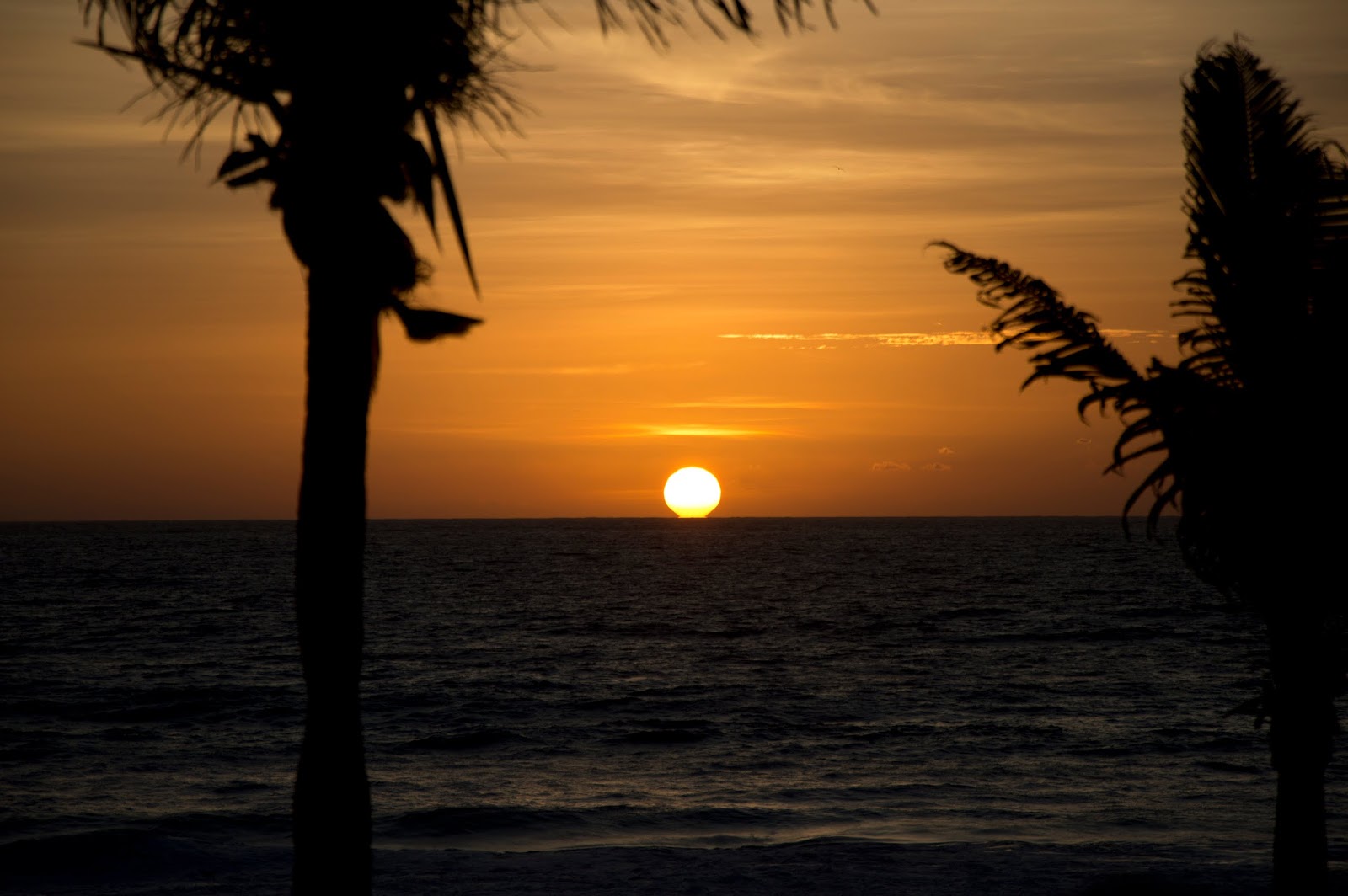 The birds were singing loudly. I liked spending part of the day wandering through the hotel and on the beach where Duke Speer was filming a clip (which I participated in) on the Pharell William's song "Happy" but with the refrain "Because We're Joomla". This clip is soon to be released. 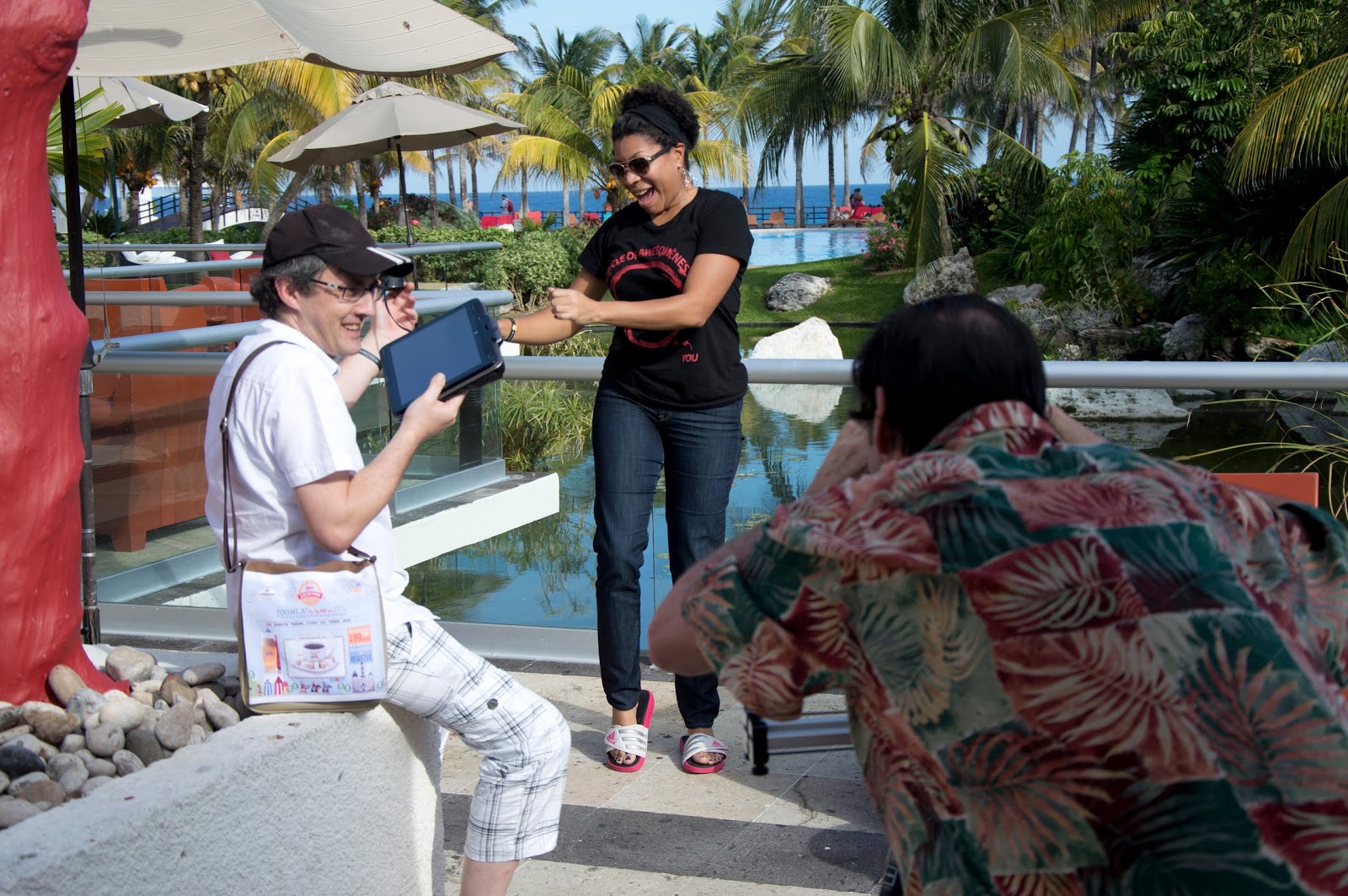 Yoga On The Beach

Yoga sessions were organized by Peter Bui every morning at 7am on the beach. The weather was so nice and the water of the Caribbean so welcoming, it was not difficult to not to go swimming. A good shower, a hearty breakfast and the day was productive! Pete thank you for those moments of relaxation and fun.. 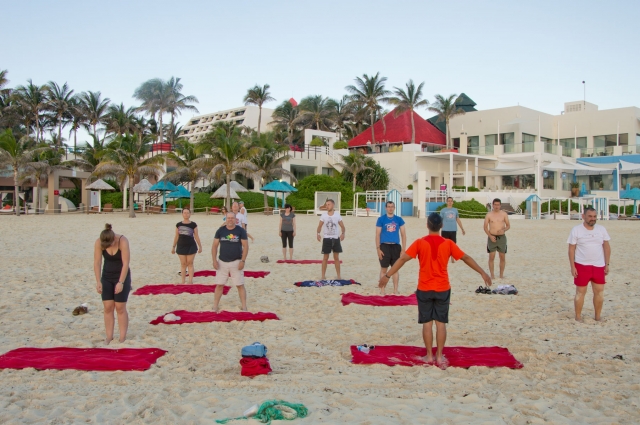 I didn't attend many sessions, or I should say I attended many at once. My goal was to take photos of the event (upon request by Dianne Henning), and to meet many Joomlers. Here are the sessions I liked:

Joomla!Ignite presented by Duke Speer: he reminds me of a television show host, which made him smile when I told him. 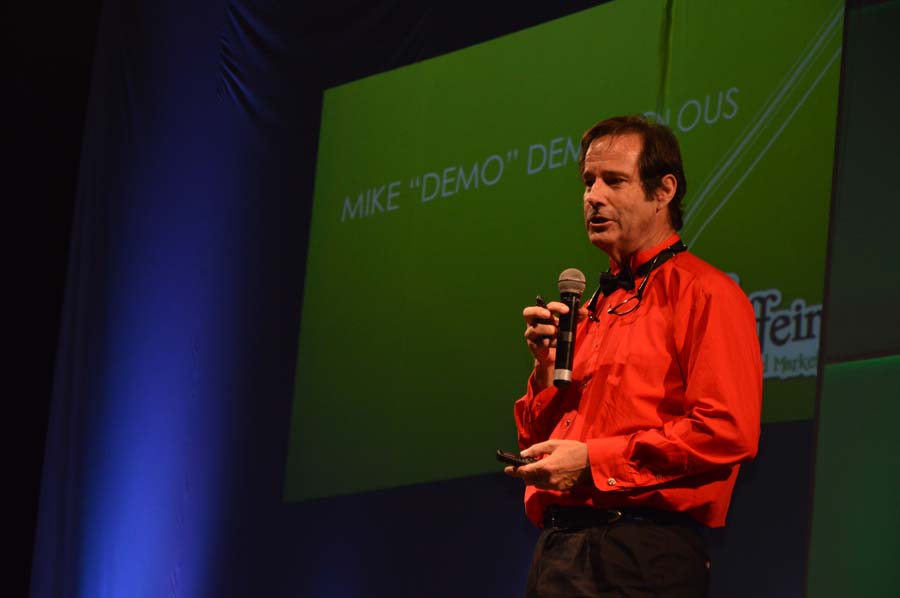 Joomla!Ignite debuted at the Joomla World Conference in Boston. This year it was timed for cocktail hour with a new team of presenters. During this 90-minute fast-paced session, 10 speakers had 5 minutes to inspire, enlighten, educate, or just make us laugh, as was the case with Brian Teeman who dressed up as Superman at the end of his talk. 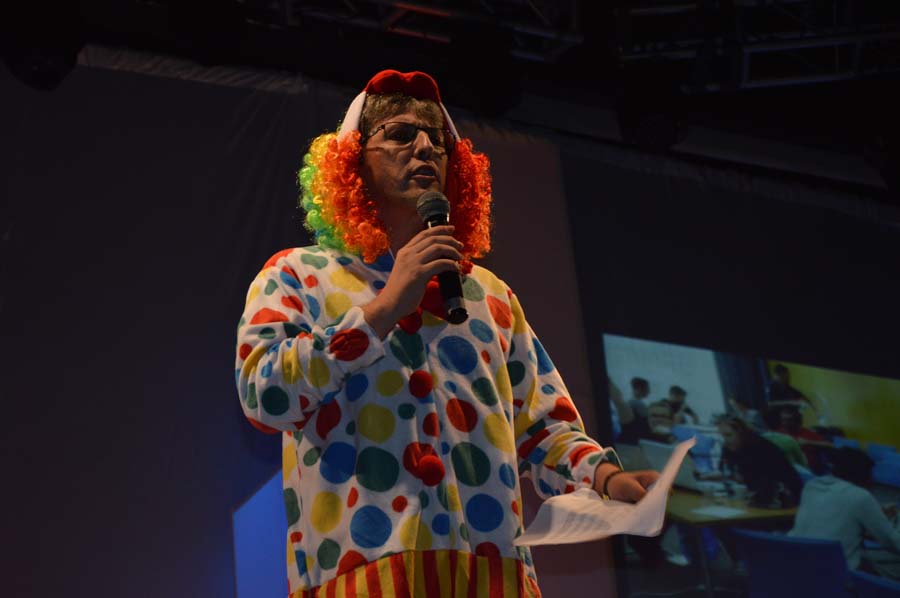 During the closing Keynote, Sander Potjer spoke about those involved in Joomla, who proudly contribute to the project and proposed calling them "Joomlers." Sander also informed us that postcards cards (created by Chiara Aliotta) were available on the tables, and we could take some and send them to people we know in order to thank them for helping with the Joomla project.

Here are the slides of the conference:: http://fr.slideshare.net/sanderpotjer/we-are-joomlers-joomla-world-conference-2014-jwc14

A Mexican representative (Juan Carlos), thanked all the organizers of this 2014 conference in Mexico. He proudly unfurled a huge mexican flag, and offered it as a token of gratitude to Dianne Henning of the JWC organizing team. 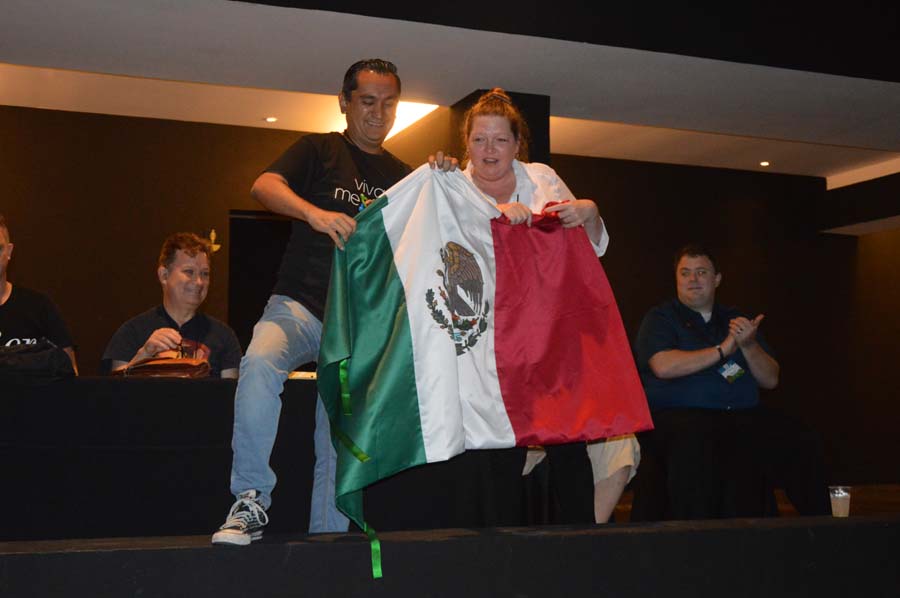 Javier Gomez and Tito Alvarez did a fun and interactive presentation about Joomla. The attendees had to make the letters of the word "Joomla" with their arms, following the music (with Tito on the guitar). This show was an excellent way to get everyone in a festive mood. You can watch it here: https://www.youtube.com/watch?v=QITSolADhfI

I found the few sessions I was able to attend were of high quality this year, presented by enthusiastic developers who were very open to the public.

After the serious part, it was time to relax a little. We were invited to a Mayan barbecue on the beach. Many people were present (250). A crazy atmosphere, punctuated by frenzied salsa dancing, a dynamic DJ, mojitos, margharitas, etc.... On the dance floor everyone was dancing to Latin rhythms. That evening we were Joomla: i.e., all together! Under a beautiful moon. Heat was in the air! https://www.youtube.com/watch?v=NeAV5lyHSg4 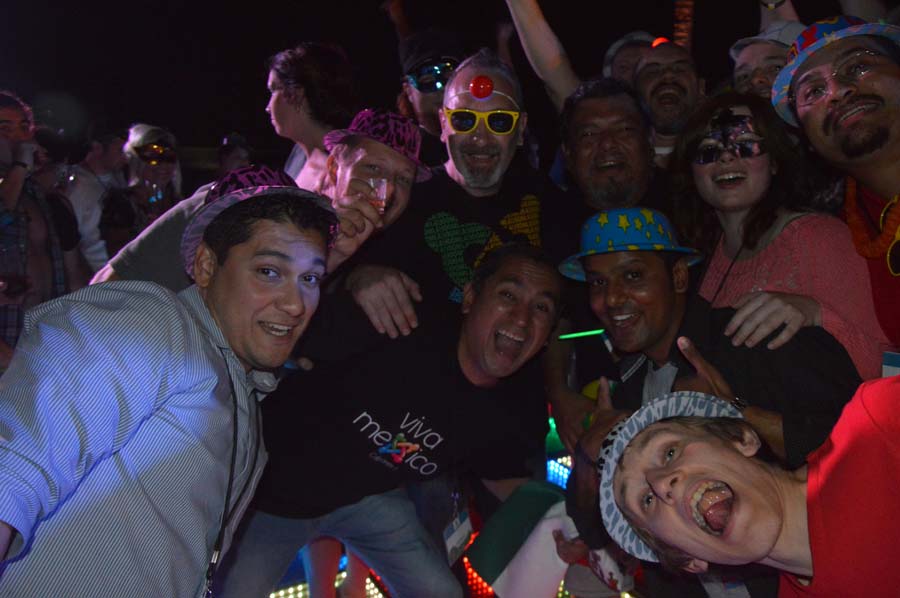 The return was sad, of course. I did not want to leave behind these landscapes and smiles. I had the opportunity to share part of the trip with Alice Grevet, Radek and Sigrid. Thank you to Brian for directing me through the labyrinth of the airport and its impressive security system; the customs recruiting sergeant, the scanner, etc ...

Two hours of waiting in Atlanta. Time to smoke a last cigarette in a cage reserved for smokers, eat a little Tex-Mex for $5.00. The Atlanta to Paris trip was quite painful. Economy class has good flight service, but not enough comfortable seating. Forced to change seats during the night flight, I found next to a large person who was taking a lot of space. I arrived in Paris on 11/11 at 8:00, not fresh, unshaven, but happy to have had this experience.

Five days goes very quickly. It was difficult to be everywhere and enjoy everything at once. I really liked the Joomla World Conference 2014 for meeting Joomlers worldwide, making friends and sharing a lot of knowledge. On the downside, I found the place (admittedly beautiful) was a little too big in relation to the event. Many were lost in the maze of the hotel, and some found themselves alone at the table...

In short, this little detail is nothing compared to the experience. I want to thank the JET team again from the bottom of my heart for giving me the opportunity to participate in this event that I will never forget. THANK YOU (1000 times) for your time, your energy and your friendship. I am proud to belong to this great community worldwide. I hope to see you next year.

PS = Thank you for reading to the end, and for your trouble I offer photos of my trip: