- Or how Michael Met Joomla.

It happened in the days of the last weekend of October 2011. People had journeyed from around the globe and throughout the country to attend this recurring yearly event. The event would by many locals be thought of as the one weekend a year that could even measure up with Christmas itself – and this year the expected attendance numbers would climb over 200, although it was only the 2nd time the event was actually held (and thus the event became recurring).

So as said, the attendees were traveling to Denmark from throughout the world:

From America Ryan “Santa” Ozimek flew in through 3 airports and a bit of luck with a whole isle of seats for himself, without losing a single present in the luggage handling (oh yes that he did on the return trip).

From England Brian “Rudolph” Teeman took a slightly smaller plane, but then again Brian didn’t sleep for 10 hours like some others (none mentioned) while getting there.

From Greece came Nicholas “Comet” Dionysopoulos flying over a little airport in Frankfurt where he joined up with more of Santa’s reindeer for the remaining part of the journey – and this time Comet had really packed light unlike all other times.

From Germany came Sigrid “Vixen” Suski arrived at the airport in Frankfurt along with Radek “Prancer” Suski to follow Comet for the remaining part of the journey – but alas they were both stopped in the reindeer security control.

From German came also Thomas “Donner” Kahl, although he arrived Friday morning by train – perhaps his reindeer flying skills was not quite up to par.

From Denmark came Janich “Prancer” Rasmussen, Ole “Dasher” Ottosen and Ronni “Blitzen” K. G. Christiansen – all three with short travels as it was practically in their back yards.

As Blitzen was already in Denmark he had set upon himself to organize the transports, pickups, sleeping arrangements and dinning of the other reindeer and Santa. So Blitzen went to the airport and picked up several reindeer, although Santa and Rudolph had arrived early and driven to the hotel themselves – there were still more reindeer so join from the nearest airport, however as several of the reindeer had been stopped in the reindeer security control Blitzen ended up only picking up Comet and then driving back to the hotel for the final check in.

After the check in of Blitzen and Comet at the hotel, which Blitzen has booked almost entirely, the entire group with Santa, the reindeer and all of Santa’s Little redHELPERS from redWEB traveled to a local restaurant (The Flame) for a good night out with good food, Blitzen however had not quite calculated upon the 3 km walk uphill for said restaurant – so it was quite some worn out helpers that arrived at the restaurant (Santa and the reindeer did of cause not had so problems). 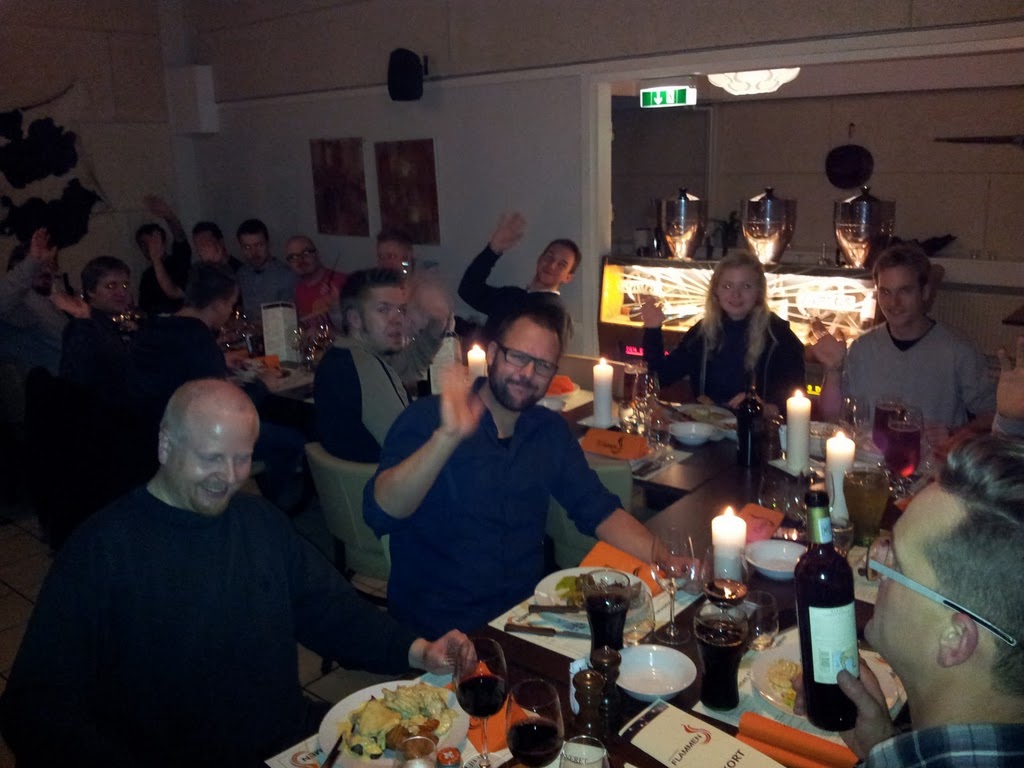 The dinner was very good and Santa got a long word with Blitzen who even forgot to eat because Santa spoke so many words and Blitzen eagerly took part in the conversation – but as they all walked back to the hotel (which was 3km downhill this time to the joy of the Little redHELPERS ) Santa and some of the reindeer turned in for the night while Blitzen led on in a night party at the redBUS outside of the hotel and here two Norwegian Reindeer joined in Kristian “Olive” Pettersen and Bjørn “Clarice” – and one thing you surely must say is the Norwegian and Danish reindeer and Little redHELPERS sure know how to have a party in a bus ;) so Olive, Clarice, Dasher, Prancer, Blitzen and several of the Little redHELPERS held out for hours while having a good pre-party – for is there one thing reindeer do like beyond Joomla events it must be having a good time.

Early Friday morning everyone was up and had breakfast at the hotel and went to the venue IBC (International Business Collage) where we met up with Regin “The Snowman” Madsen who was the local arranger along with Dasher, Prancer, Blitzen and a little gnome named Brian Rønnow.

The attendees started to show up and introductionary talks was done in both the 2 main auditoriums with a total of close to 250 attendees – which was no small amount for the 2nd time ever the Joomla!Day event was held in Denmark. 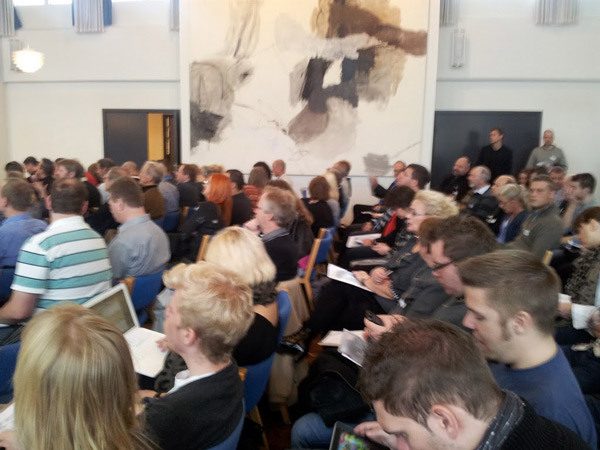 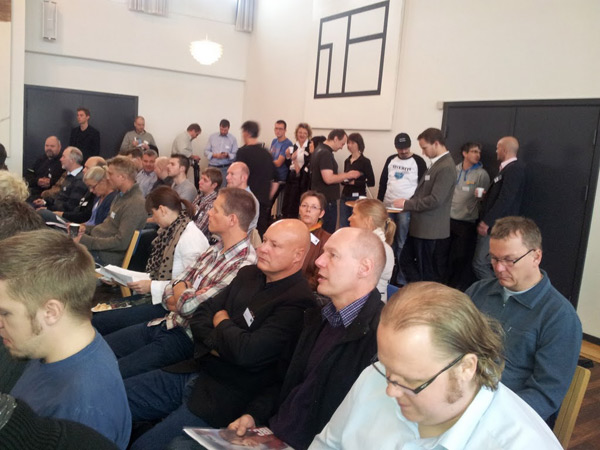 After the introductions Santa himself went on and held a good long presentation on Joomla and what Joomla means to Santa – it was a great presentation – the first of many that day, and the day to come. 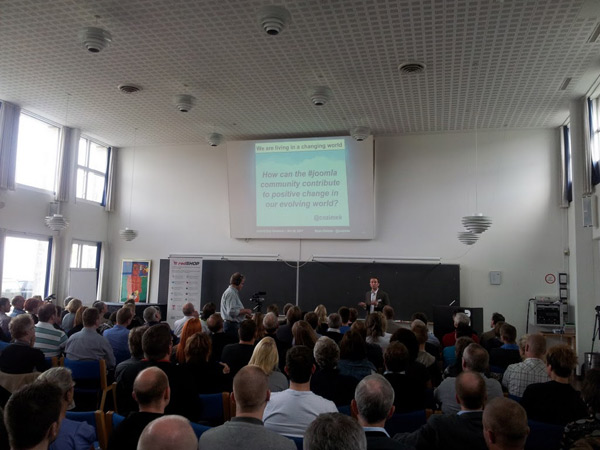 All in all it was a great first day of the event – also named the Business Day – with a lot of very interesting topics, talks and presentations and at the end of the day there was a big social event with good food and cheerful attendees, redHELPERS, reindeer, a snowman and Santa.

Early the next morning, all of the fun started again, as the international reindeer were introduced again, and after that they continued giving more talks and presentations. 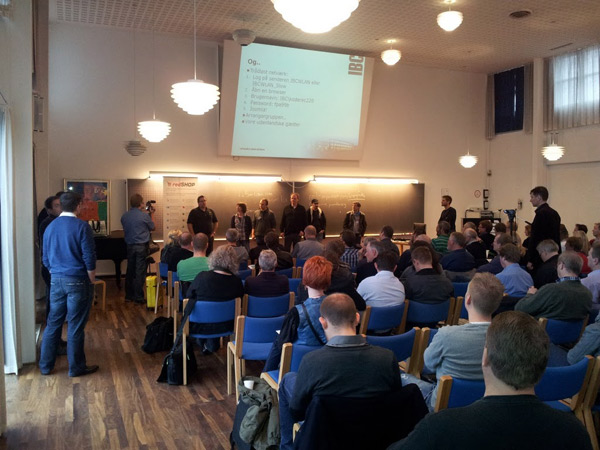 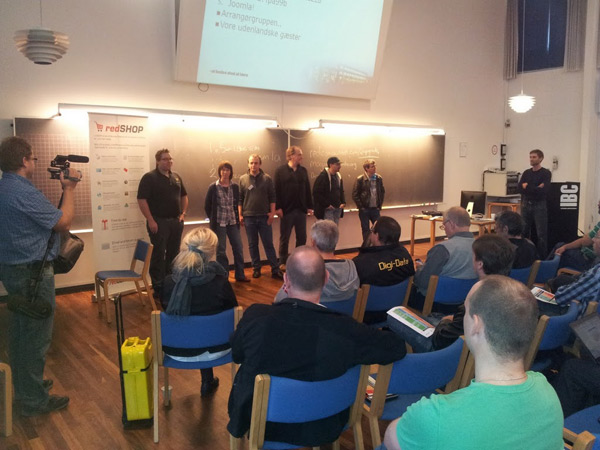 And then we moved over to the (in)famous Joomla Rocks session – which had been done the year before live over skype with Santa at Joomla!Day UK and Rudolph at Joomla!Day DK – but this year we where so lucky both of them could do it together. 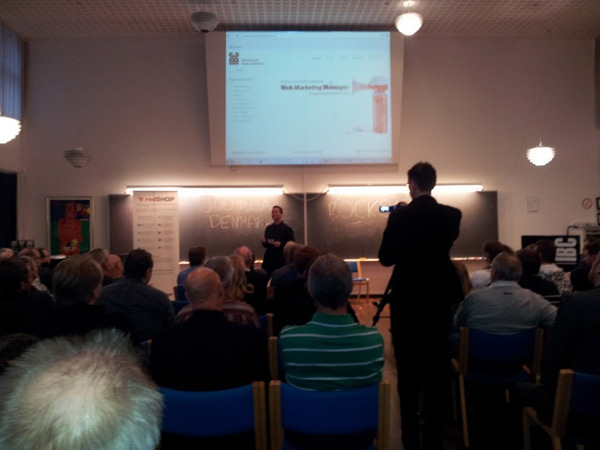 Michael tweeted that he had actually talked to Rudolph and a bit later that now he had actually shaken Rudolph’s hand – so fired up by the inspiration of the tweet Blitzen decided to capture it all for the afterlife and let Michael meet Joomla as the event was getting to the finishing point. 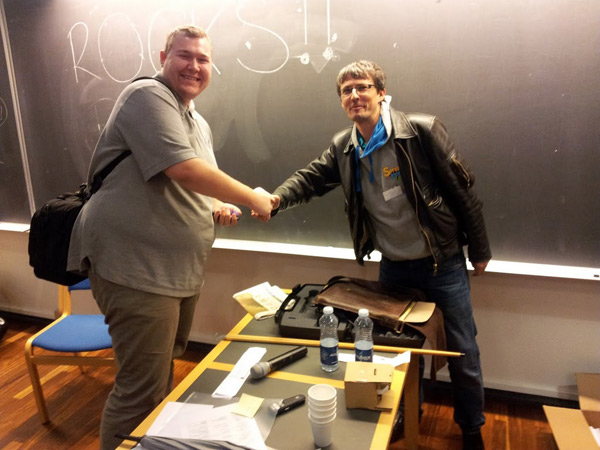 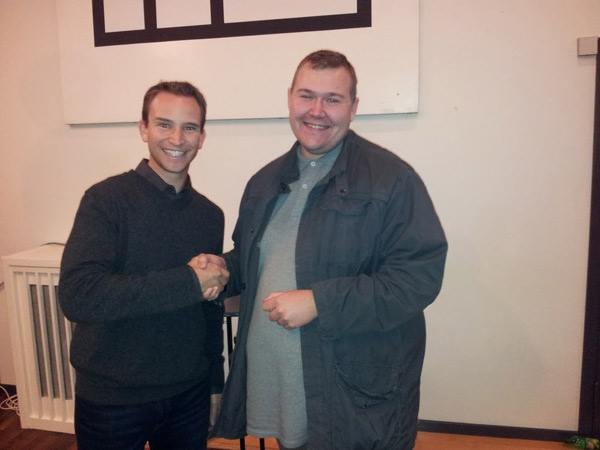 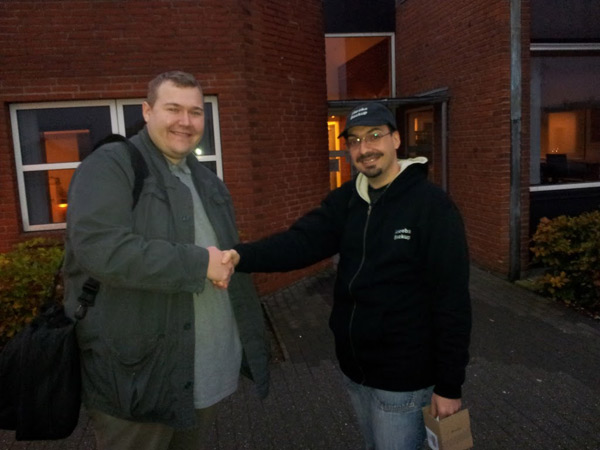 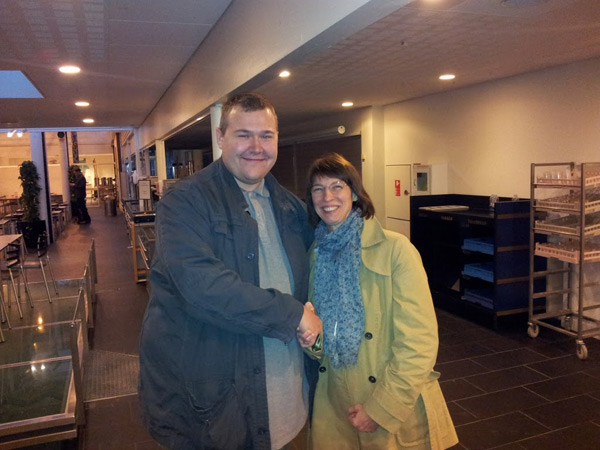 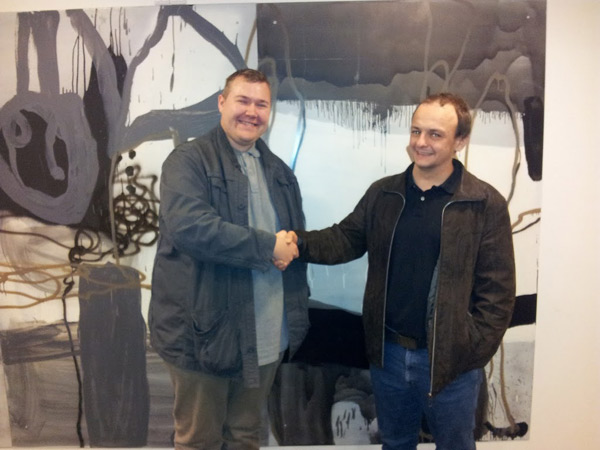 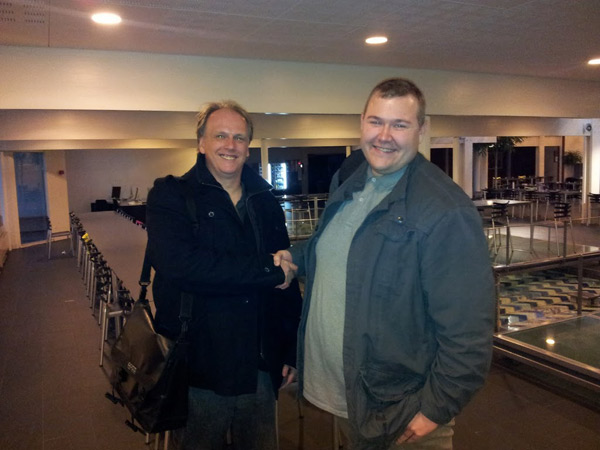 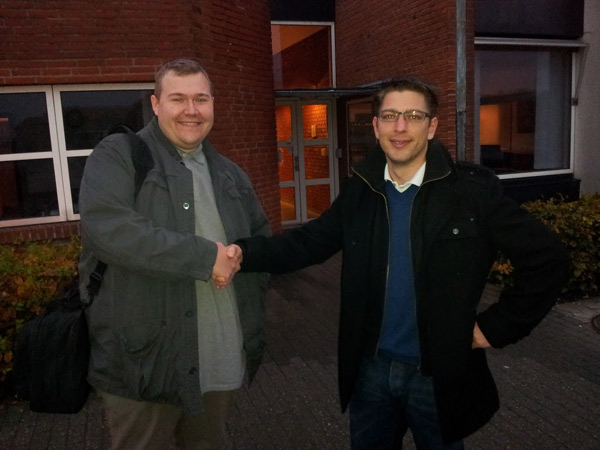 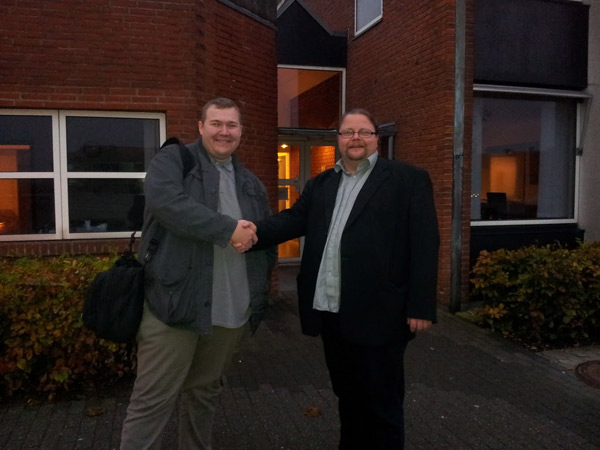 Michael had a super event – but Michael was not alone – all of the attendees, the speakers and the organizers all agreed that it had been a massive success and to meet back the year after, although now with a goal of reaching more than 300 attendees on the first day for 2012.

As the attendees and the redHELPERS went home from the event and the snowman melted – Blitzen took the remaining reindeer and the little gnome to a local Mexican restaurant (Because Santa and Blitzen do love Mexican) and here the “last supper” took its course after a great event. 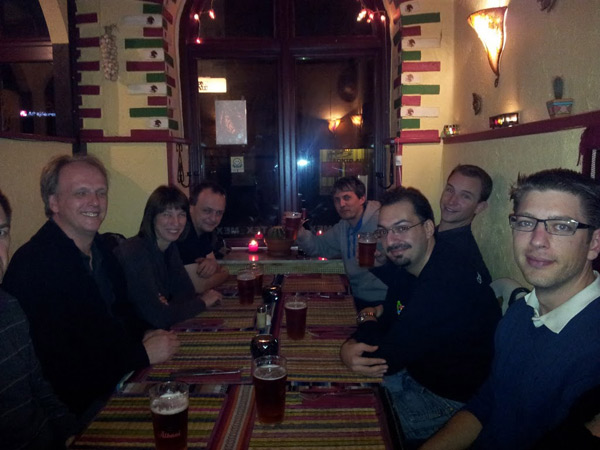 After dinner the remaining crowd gathered at the hotel for some coffee and a talk on the future of Joomla and what could be on the future path – and Prancer proved that he really is quite skeptical (:P). 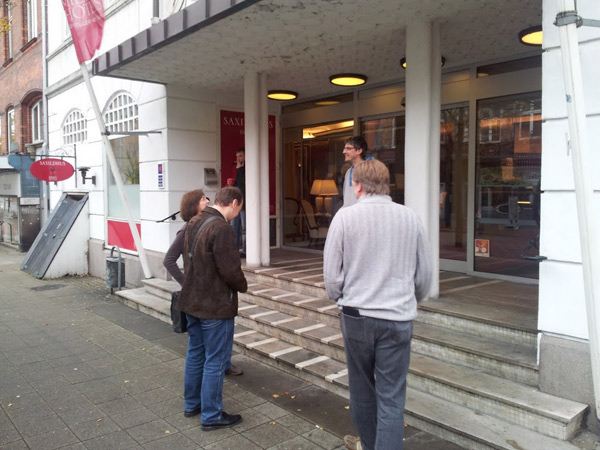 Later the next day Rudolph, Vixen, Prancer, Donner and Blitzen where the last to leave the hotel and while Donner took the train back home to Hamburg, Blitzen drove the rest to the airport and then went home after some long days but with quite the intake of Joomla and once again in a renewed belief in the project and what meeting in real life means for the long term sustainability of our project.

Of cause Santa could not attend without brining at least one present so as Santa gave away the famous penguin to Blitzen. Blitzen passed it on to his son Little Blitzen (otherwise known as Emil) and as it can be seen penguins also claims the heart of the young. 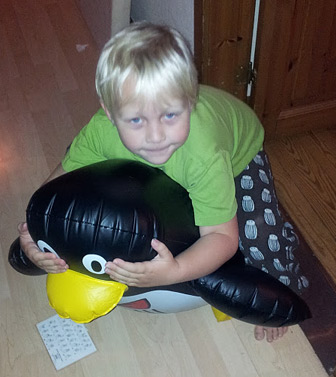 And on that line Blitzen here would like to wish you all a Merry Christmas and a Happy New Year.