Joomla made its first appearance at HostingCon Global 2016 in New Orleans, Louisiana. Billed as "The Premier Industry Conference for the Worldwide Hosting and Community", the conference/expo seemed like the perfect venue to showcase Joomla! We were asked to present a 2-hour workshop and given an expo booth to share Joomla with the community.

HostingCon Global kicked off on Sunday afternoon with our 2-hour workshop, "Supporting Joomla to Better Service Customers and Create New Revenue." We went over all of the different methods and reasons to get involved and volunteer with the Joomla! Project, ways you can give back to the community, and how it can help your ROI (Return On Investment). Jonathan Gafill from CloudAccess.net joined us to give his case study and answer questions about Joomla hosting. Aleksander from Perfect Dashboard/JED volunteer was in attendance and shared his Joomla story with the audience. This session was well attended and opened the door to several new partnerships. 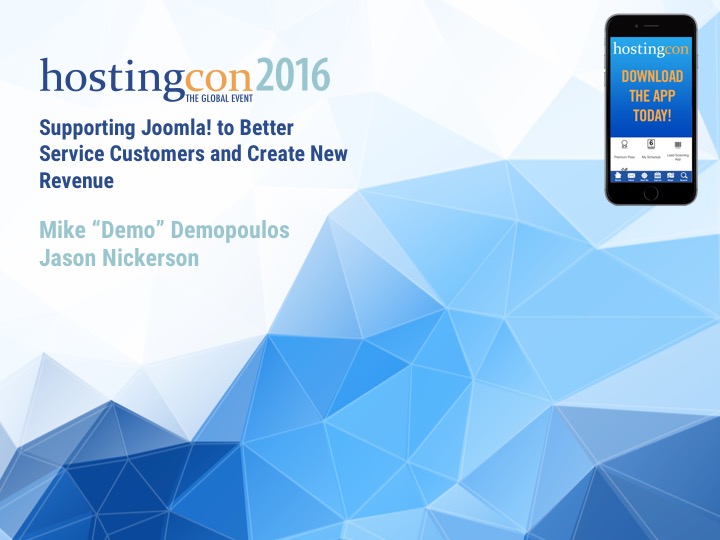 Monday was full of sessions, and the exposition hall opened with over 250 exhibitors. We were able to attend several sessions and workshops on marketing and shared our open source community experience. Our booth was packed from start to finish, and we were very excited to represent the project at such a large scale event. Many of the other CMSes and site builders were in attendance, but Joomla was the only CMS to have its booth. (Special thanks goes out to HostingCon Global 2016 for making this possible.)

In our discussions, we noticed that most of the attendees did not know that Joomla was a not-for-profit entirely volunteer powered project, and they thought we were corporate backed just like some our other competitors. We spent a lot of time educating, handing out Joomla stickers and talking about the new release for Joomla! 3.6. Monday evening was the opening night reception, and we met hundreds of users of Joomla, and all were excited to see Joomla! being represented. 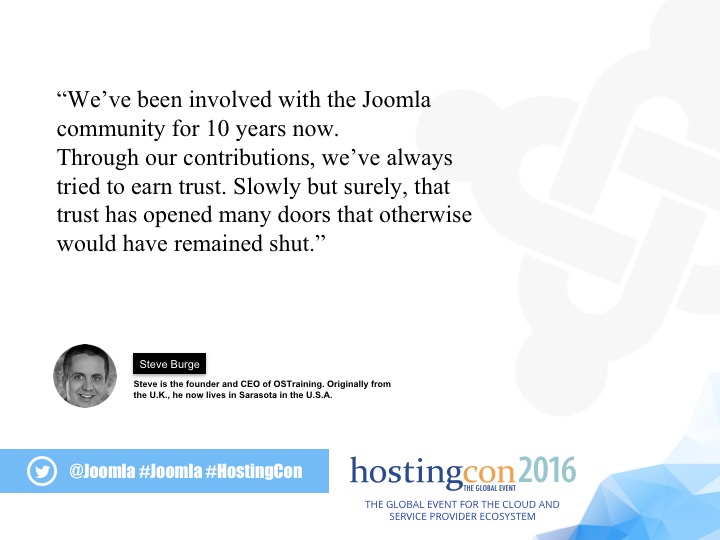 Tuesday was focused on the exposition hall and manning the Joomla booth. As we interacted with the attendees, we started seeing some common trends. Many of the hosting companies were excited about the Joomla! 3.x series, as the past security issues facing the legacy versions, have troubled them over the years. They were quick to point out though that Joomla's security issues have bothered them far less than some of the other CMSes. We also got positive feedback on the platform verse other CMS. The community as whole embraces Joomla! as a powerful CMS while understanding all the misconceptions about it compared to the other systems.

They praised the current state of backward compatibility and smooth migration. In our Sunday workshop, we discussed ways to assist Joomla! users that can also benefit their business. In addition to hosting companies, a good number of web developers were in attendance, and this is where we got the most positive feedback from. The developers were outgoing and excited to meet volunteers involved in the project. It is evident that web developers love Joomla! HostingCon Global also was happy to have us. Cheryl Kemp, the conference content director, said, "We are so excited the Joomla! project participated in hosting this year. Open-source projects are a vital part of our ecosystem, and what they bring to the industry is great." 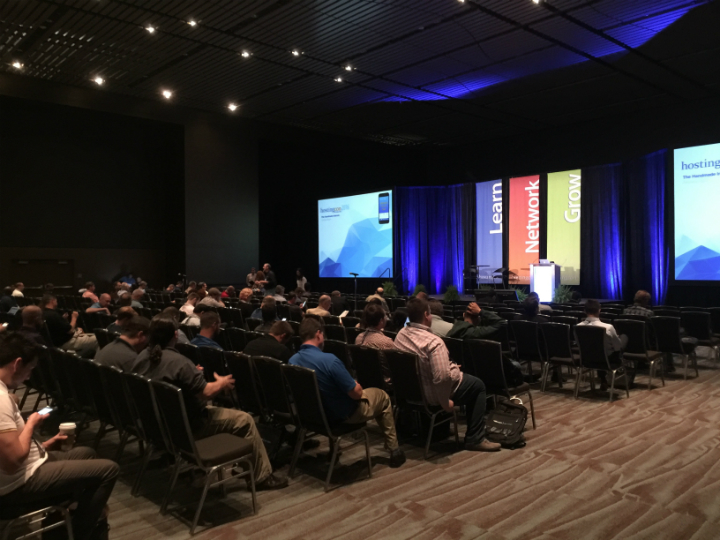 Our mission for the conference was to increase visibility, educate hosting companies on how to market Joomla! to their customers, and create new partnerships. We had over fifty one-on-one meetings with potential Joomla! partners and sponsors. The event was a complete success on all levels.

Overall, we learned that our presence at such events is needed. Developers choose Joomla! first, and marketing Joomla! works.

If you can make it, we suggest you attend the upcoming HostingCon Europe in Amsterdam this October.

This article was written by Mike Demopoulos and Jason Nickerson