While preparing for the 10th Birthday celebration of the Joomla project and the Joomla CMS, we look back at celebrations from the past 10 years. They grow up so fast! 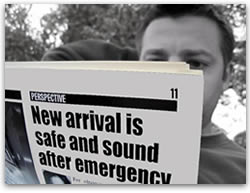 On the 17th of August 2005, the Fork was announced by Andrew Eddie, and on the 1st of September, the news was shared with the world:

"After a difficult and traumatic labour, Open Source Matters is delighted to announce the birth of their new baby, Joomla!"

"OSM request that no presents are sent however expression of your joy can be left in the reader votes at www.linuxawards.co.uk (for your vote to count, you must make a valid nomination in all categories)."

Joomla went on to win Best Linux / Open Source Project for 2005 at the Linux & Open Source Awards in London.

On the 16th of September, Baby Joomla! cut its first tooth with the release of Joomla 1.0 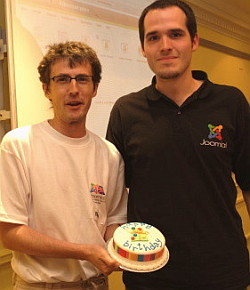 The Core Team shares the astounding growth of Joomla in its first year, with more than 2.5 million downloads, over 50,000 community members, and close to half a million posts on the Forum, and they thank everyone for their support.

Joomla Core team member Jinx takes a moment to reflect on the first 12 months, and share his own perspective on challenges that had to be overcome.

He ends with these words:

"A year ago the world had never heard about Joomla!, today Joomla! has earned its spot on the virtual highway, it will be exciting to see what tomorrow brings. Happy birthday !
September, 01, 2006"

Joomla 1.5 would be the first major upgrade to the Joomla CMS, and was released a few months later in January of 2008. 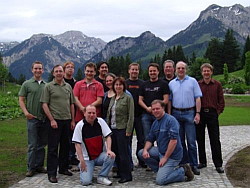 On the 3rd birthday of Joomla, Amy Stephen reminds us that it takes an entire community of people working hard all over the world to make a project like Joomla thrive.

That month the Joomla Core Team, together with the Board of Open Source Matters, also reveals the new Joomla! Mission, Values and Vision.

Joomla is 4 years old, and we thank and celebrate the collective effort of the Joomla community and teams.

On the event of our 6th Birthday, Brian Teeman wonders which date is the right one to officially celebrate the Joomla birthday on? The 17th of August, when the split from Mambo took place, or the 1st of September, when the Joomla name and project was announced to the world, or the 16th of September that marked the first release of the CMS. (A number of people shared their thoughts on this topic)

On the 1st of September, Steve looks back at the day joomla.org was launched, and the Joomla! name was announced to the world. 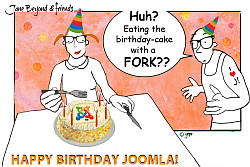 Nelleke Verhoeff & Herman Peeren (Yepr) creates an illustration for the JCM that celebrates the 5th birthday while also poking a bit of fun at the forking-paranoia of the time.

Joomla Translation teams from all over the world helped to translate that 5th birthday message, and we also shared how everyone was celebrating, including this Birthday video, that was made by the Community, for the community:

One the 16th of September, Steve looks back at the first announcement of Joomla 1.0 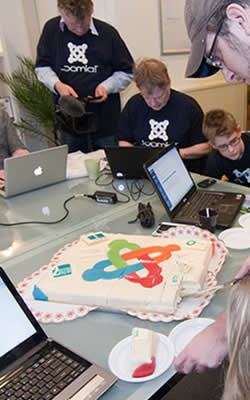 Steve Burge shares stats about the growth of Joomla over the years, looking at the number of Forum users, Joomla downloads, and listed Extensions on the Joomla Extensions Directory (JED).

The Joomla Community responds, and Steve publishes 40 of the replies, listing quality, ease-of-use, community, helping make their business grow, helping to make users happy, as reasons why Joomla Rocks! He ends off with the reminder that it's YOU that makes Joomla Rock!

The 7th birthday of Joomla, brings with it news that Joomla 3.0 would soon be released. Combining volunteering and celebration, Joomla Pizza Bugs and Fun events are organized all over the world to help get Joomla 3 ready, and also to celebrate our birthday. 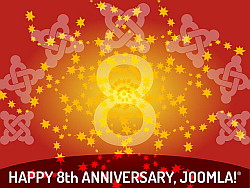 On the 8th anniversary of the 1st release of the Joomla CMS, we again look at the growth of the project. 44.9 million downloads of the CMS, and 67 accredited translations, 160 registered Joomla User Groups, and 29 JoomlaDay events that year (to name a few).

We also celebrate that there is now also a Spanish edition of the Joomla Community Magazine. 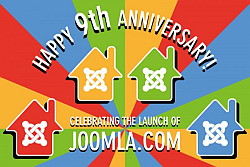 Last year, while celebrating the 9th birthday of Joomla we also had the announcement of Joomla.com - a slightly modified version of Joomla! CMS, offering an easy way to get started with Joomla, to create awesome free hosted websites. Online in seconds, easy to customize, freedom to grow.

We were also inviting the community to vote for Joomla in the CMS Critic People's Choice Awards, and due to the overwhelming response, Joomla won Best Open Source PHP CMS in the People's Choice CMS Award category.

This year, we celebrate the 10th Birthday of the Joomla Project, the Joomla CMS, and Open Source Matters. Some might already have started the celebration by attending JandBeyond earlier this year, or might be planning a special Birthday celebration during your next JUG meetup (in August or September), at your next JoomlaDay, or you can celebrate this special year by joining us for the 4th Joomla World Conference, later this year in Bangalore India.

You can share your Joomla Birthday pictures and videos with us, by sending them to: This email address is being protected from spambots. You need JavaScript enabled to view it.