Scottoiler is an award winning manufacturer of motorbike chain lube systems. Operating for over 25 years, they are the global market leaders in this field. 1 in 10 motorbikes in the UK have a Scottoiler system installed, but their market extends globally. Operating a number of different global websites, this new site combines the UK and US stores and is the first step in consolidating their online presence into one central system.

Martin Bryce, Operations Director - Bryce's management experience ensures all projects are delivered on time and on budget. Having worked on projects such as the A77 Safety Group for The Scottish Government and Carnegie College, Martin is a key member of the team and the main point of contact for all clients.

Simon Bennison, Digital Marketing Manager - Bennison heads up the digital marketing arm of Alienation Digital, bringing online success for our clients and a fresh approach that also impacts on other areas such as interface design.

Hadrien Jouet, Senior Developer - Hadrien has been working with Joomla! for many years and his experience with the system helped in considering the different options when it came to using/customising existing extensions or build new ones from scratch. A number of other Alienation Digital developers also worked on various aspects of the project.

Aidan Martin, Senior Designer - Aidan brings a fresh perspective to the design process at Alienation on projects such as Carnegie College, Coatbridge College and Young Audiences Scotland. Aidan is experienced in designing to accessibility standards, compliant CSS and Flash.

Graeme Pratt, Developer - A recent addition to the developer team at Alienation Digital, this was his first large-scale Joomla project in his new role. Graeme has been a professional web developer for a few years now, largely specialised in web-based applications, which became a definite advantage when it came to understanding Joomla! and Virtuemart from the inside out.

As the market leader in the UK for motorbike chain lube systems the current website did not reflect the company's position. Scottoiler has plans to expand into the US market, and the current site was not fit for purpose. In the UK, the company sells primarily through distributors, however for the US market no distribution channels are in place, therefore the site had to be more overtly sales focused. In addition, Scottoiler required their website to act as a credentials tool for approaching the large motorcycle manufacturers such as BMW, Triumph, and others to secure OEM deals. 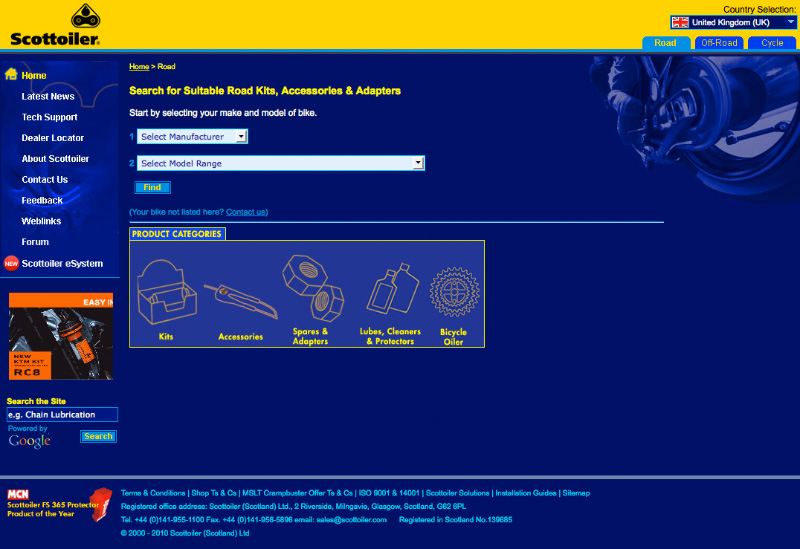 The previous website did not reflect the position of the company as a market leader. While the UK market is strong, launching the brand in the US market introduced a whole new set of challenges. It was essential for the new website to introduce the features and benefits of the product to the US market that was new to the brand.

Getting Down to Business

A full assessment of Scottoiler's previous website was done to highlight any downfalls, potential improvements and additional requirements. Once Alienation had an idea of all the features they needed to implement, it was a case of verifying that the third party extensions available would be fit for the job, and if not, would then be scoped out for custom development.

“Generally speaking, when Alienation looks for a new extension we first try them out for ourselves, assess how applicable they are to the scenario and how solid and easy-to-use they are. If we're happy with an extension, but know we will have to customise it, we try to determine whether customisation time will actually take less time than building the solution from scratch.”

What Makes it Tick

On top of the extensions provided with the original Joomla! installation, Alienation has a number of their own extensions that they re-use and enhance over time. The following third party extensions were used as well:

The website has a few custom extensions, but most of the development time was actually allocated to customising existing extensions to make them play together nicely.
Dealer locator: Scottoiler were looking to provide their clients with an easy way of finding Scottoiler dealers in their area. The extension makes a number of relatively straight-forward filters available to the end-user. All these filters simply perform a match against the dealer entries specified in the back-end, with the exception of the postcode one which performs a radial search using Google Maps.
Slide Banner: this is the feature banner on the homepage. This is a module that itself relies on loading modules (one module per slide) assigned to a given position. All the effects and transitions are performed with Javascript (and Mootools), meaning the content of this banner can be indexed by search engines too.
IP redirection: this is a plugin running in the background which matches the user’s IP to a database of IP ranges associated to specific countries. Each country is itself associated to one of the two languages on the site (UK/US), so that it can accurately redirect the user to the correct version of the site, rather than simply base it on the browser.
Bot Trap: this is a plugin Alienation developed specifically for RSForm!Pro which replaces the usual Captcha fields, which can sometimes be more cumbersome than they are useful. The plugin is invisible to the end-user and eliminates the need for hard-to-read, time-consuming Captcha verifications, whilst successfully keeping spam bots out.

Bringing It all Together

One of the biggest challenges of this site was to offer end-users two versions of the same site that have a lot in common, but also a lot of language specific stuff. The ground work was achieved thanks to the JoomFish component, but Alienation needed more than just translations:


Scottoiler’s products rely on a complex system of dependencies that had to be presented in a simple manner to the users:

Smoothing Out the Bumps

There were a number of issues that had to be overcome with regard to payment processing. Since the site is split and offers products in GBP and US Dollars, the chosen solution had to accommodate this along with a number of other subtle differences — such as tax & shipping.

The original system chosen by Scottoiler simply could not deliver all that it promised and changes had to be made part way through the project. A number of replacements were investigated before finally selecting Realex — a fairly new player in the market.

Scottoiler also wanted to offer Google Checkout, but due to limitations you cannot process US payments from a UK account — a number of workarounds had to be implemented. All of this added to the project scope and delayed matters. In the end though, Alienation provided a solution that works well and handles all of Scottoiler’s payment processing needs.

Having worked with Joomla! since its early versions, this was a choice largely based on experience. Over the years, Alienation has learned to love the wide range of built-in functionality, the reliability and the enormous community that Joomla! has to offer. Very few content management systems, free and commercial alike, can offer such versatility while keeping usability, functionality and security in mind. Having to rely on a CMS based on open-source technologies is comforting, and it means we are providing Scottoiler with a system that almost anyone can learn and easily understand.

From a development point of view one recommendation would be to always budget extra time to get to know/find your way around a new component. Virtuemart for example, is a large, complex component with many different functions that are linked through both frontend and backend files. The hardest part when customizing/extending virtuemart was actually finding the correct area/file to customise...the actual coding was often relatively simple.