JoomlaDay Nice France 2015, by the Mediterranean

JoomlaDay France 2015 will take place in Nice, located in south-eastern France on the French Riviera, about 30km from the Italian border. For this 9th French JoomlaDay, the event will take place over two and a half days, starting with a JoomApéro evening, followed by two days of lectures and workshops on May 9-10. A rich and intense program is planned in the great tradition of the French JoomlaDays!

This year Joomlers attending the event are treated to a choice of more than 30 conferences and workshops, led by Joomla experts in the community, in a spacious venue!

Along with recurring themes on templating, security, e-commerce, integration and migration, we’ll also be discussing topics on the Joomla environment, such as “The legislation concerning my Joomla site,” or “The experience of a Joomla entrepreneur."

Two new features are being added to the program this year: Lightning Talks and a Pizza, Bugs and Fun™ session have been included in the JoomlaDay.

Nice is the largest city on the French Riviera, bordering the Mediterranean. It is famous for its many attractions, its mild climate, and light. Nice is also close to Sophia Antipolis, the largest science park in France and Europe. Founded in 1969, it is currently home to 1,400 companies generating about 31,000 direct jobs in advanced scientific research in the field of information technology and communication (ICT), and multimedia. Sophia Antipolis is the Sillicon Valley of France, impacting the education of children, as well as current and future higher education!

For all these reasons, the idea of organizing the 9th JoomlaDay in Nice was so attractive - to combine work and relaxation, an idyllic geographical setting and an optimal working environment.

From a services point of view, the Campus was the best choice for AFUJ to produce a JoomlaDay with memorable conferences and workshops.

The summary of all the sessions is available on the official website. Please visit http://www.joomladay.fr/infos-pratiques/nice-france.html

This year we will have a "pre-event" party, and two new programs.

A JoomApéro XXL! For some years we have been holding a giant Joomapéro pre-event with the local team. This not only allows us to meet the team that has worked together voluntarily to present their region in the best possible light through this international event. The Joomapéro is also an occasion for everyone to spend time together and have fun. What a pleasure it is to see your online friends in real life, and to discuss with national and international speakers you are not likely to meet outside of a JoomlaDay. For many, "their" JoomlaDay begins Friday evening, and kicks off the two days they will spend devoted to their favorite CMS.

This year the Joomapéro will take place in a brewery located downtown near the famous Coulée Verte.

During the JoomlaDay, a Pizza Bugs and Fun event is planned, to test and debug the latest version of Joomla. A series of Lighting Talks will close the two days, developing topics quickly and concisely. 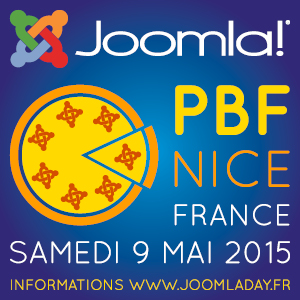 During this JoomlaDay we will hold our first Joomla Pizza Bugs & Fun (PBF) for those who wish to help the community on the Joomla! project.

It is a special time to work together on common goals. This session is open to all levels, whether you are an integrator, developer, webmaster, web designer, fan, or even if you are just discovering Joomla.

During this free three-hour session (in an “open house” format), first we’ll hear from Roland Dalmulder, the Joomla Bug Squad leader, on “Getting Started on GitHub”. His talk will be followed by a conference on the tools needed to participate in this PBF session, moderated by Marc Studer, secretary of the board of AFUJ. Then it will be up to us to debug, test, and have fun in a friendly, dynamic, knowledge-sharing and collaborative atmosphere!

Use the hashtag #pbffr on Twitter and other social media to communicate about the PBF!

Among the topics you will find setbacks in Joomla usage, useful tips, and targeted advice, such as:

No less than 20 Lightning Talks will be presented in these two one-hour sessions. It is a dynamic conference format that will close each of the two days, giving you one last burst of information and practical tips to implement on your sites upon your return!

You heard it right, once again AFUJ has gone all out to bring you the best possible JoomlaDay: the place, the teams, the speakers, and the service. Now all you need to do is register, especially since until April 9, 2015, you can benefit from membership rates!

Stay tuned to the joomladay.fr site for all the news.
See you in Nice.
The office of the AFUJ
(Association Francophone des Utilisateurs de Joomla)