We all love open source, sure, but wouldn’t it be great if open source tools, such as Joomla, were just a bit more user friendly for non-techies? Well, the guys over at Worksy had exactly that thought...

At redWEB we are longtime fans and heavy users of Joomla, and everything we do for our customers is also available to the community. As we share Worksy’s philosophy and saw a growing need in the market for an easy-to-use yet professional CMS system, we decided to join forces with Worksy. The result? Now more non-tech people can finally benefit from Joomla.

Worksy is a service that integrates a bunch of core business tools in a user friendly interface and makes them work together seamlessly. With Worksy, Joomla is a lot easier to get started with for non-techies, and with the same user experience across the different applications, it’s easier to get things done, even for non-tech users.

All in all, we found Worksy’s approach to be quite attractive in terms of spreading the word of Joomla, and in helping a lot of small businesses get out there in the vast lands of the internet more easily. As as we often say at Joomla! Day events, Joomla might be the biggest CMS out there, and we may compete with other CMSs, but let's face it, 72% of the web still doesn't use a CMS, so there is a wasted market out there to which we can spread the Joomla love.

The idea behind Worksy is to offer a toolbox to small businesses to provide access to basic business tools in an easy way. Instead of writing everything from scratch, it's based on open source tools.

Using the same login, you have access to a fully integrated toolbox, which offers CRM functionality, calendar, webmail, a place for documents, and a full integration with Joomla. Worksy is currently based on projects like eGroupware, Roundcube, Alfresco, Joomla, and of course, the usual behind-the-scenes open source tools.

The Joomla installation in Worksy offers a few templates that can be customized, and a couple of extensions, including a really nice administrator template. During the next quarter we will be adding even more features to the Joomla part of the project. 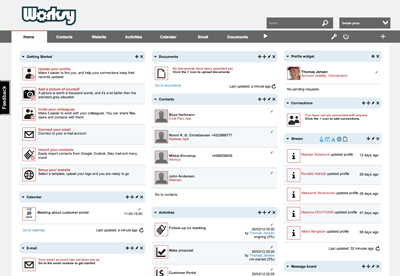 All free and good, but what are the limitations?

To keep security concerns at a minimum for the end-user, there is no FTP or database access. This of course means that there is no way for end-users to upload their own templates or extensions. In order to make this available to the public at zero cost for basic usage, the Joomla installation has been migrated to a multi-tenant platform, which means that there are some limitations as to what will be allowed.

Some users will eventually grow out of Worksy as their needs change. But for micro and small businesses, startups, and Joomla users who want ease of use and convenience, Worksy has to be one of the simplest ways to get started with a fully deployed and integrated web back-office and Joomla-powered website. Once you start the website creation wizard, you are three clicks from your new Joomla powered website. 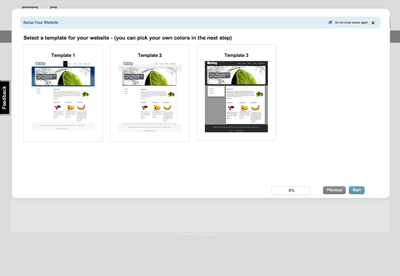 Not just for business owners!

It is no secret that our goal and aim has been to make every day life of micro-, and small business owners a lot easier. For start up companies around the globe, things have never been as easy as it is with Worksy - but let's also be quite frank and say that Worksy will also work for people who just want an "out of the box" Joomla website. With the group features in Worksy, you can actually be part of multiple groups.

Each group can be a company or business, but it can also be any form of group you create. The group concept is rather arbitrary, but you can use it as you see fit. Once you change the active group, your dashboard and files, folders, calendar etc. will all change to that respective group, completely seamless and each group has its own Joomla website with shared access. 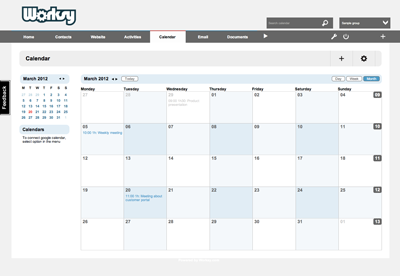 We completely rebuilt a Joomla Admin template that offers a limited but also very different way of handling Joomla compared to the stock method. As you can see in the image gallery attached to this article, all of the different open source tools really are fit to be a whole; we spent a lot of time on the UX, and interface designs. Check out the screenshots and give Worksy.com a spin, and use the feedback button to let us know what you think. 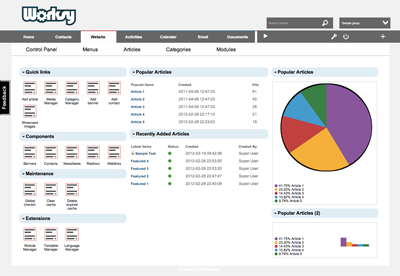 Yes — it is actually free to get an account and start using Worksy - including the Joomla website and everything.

So, what are you waiting for?